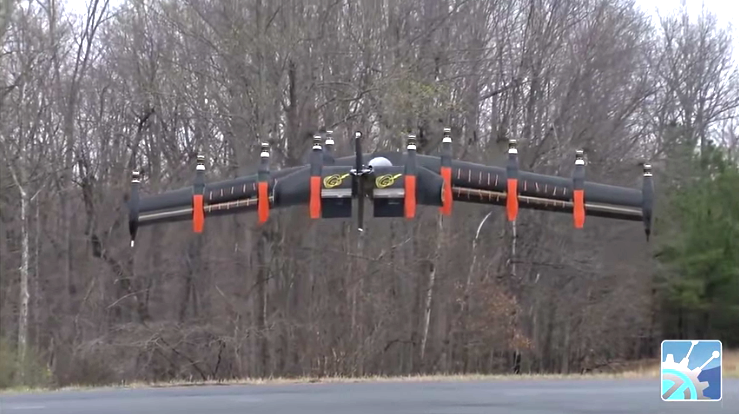 Richard Glassock, the blog’s unofficial hybrid power reporter, sent the link to this video about the NASA GL-10 Greased Lightning test vehicle – which combines hybrid power with vertical take-off and landing abilities.  It’s a more detailed look at the power system and flight characteristics of this aircraft.

The Graupner model airplane people obviously know a good thing when they see it, as reported here by the TestFlite gang – a group of enthusiastic model builders and flyers with a try it on and see if it fits attitude.  They excel in action-packed aerial photography that would make Michael Bay jealous.  Their test subject flies like a GL-10 or Joe Ben Bevirt’s S2s, and looks a great deal like an Oliver Garrow design.

Graupner’s price seems reasonable for a model craft that emulates what NASA doubtless spent much more on perfecting.  It manages to perform the same kind of VTOL performance with very smooth transitions to forward flight.  The software, like that of many multi-rotor drones, seems able to prevent pilot-induced disasters.

Your editor speculated with Richard Glassock about the possibility of a $50 or less “foamie” type VTOL with similar capabilities.  Of course, they’re already out there.  Well, probably not this one, but think of a smaller version with pager motors and RC gear pulled from one of your kid’s toys (he or she will notice right away, of course – so maybe not a great idea).

What we see are the rather incredible leaps made in electronics and electric motors in the last decade coming together in ways that would have been impossible even a few years ago.  Now, if we only had batteries to match!