Batteries are achieving increasingly high capacities and outputs, though at a frustratingly slow pace, especially for those of us who want that much hoped-for lightweight power pack that will make the electric backpack helicopter of our dreams a practical reality.  For cars, a viable and attractive alternative to pure battery use in hybrid propulsion is described in an Earth2Tech entry supplied by Dr. Seeley.  That entry describes a three-step approach to making ultracapacitors and batteries into friendly allies in propusion. First, ultracaps should not compete with batteries, but enhance them. “Second, get creative to bring costs down quickly. Third, embrace the niche.”

The big problem with batteries is being able to take in or put out large amounts of power without reaching a thermal meltdown point. Batteries are good at storing energy, though.  Capacitors can take on or release large power bursts, but have only about 5-percent of the energy storage capacity per weight of the best lithium batteries at this time.  Combining batteries and ultracapacitors may have a practical benefit, at least (for the time being) where weight is not as great an issue as it would be in an aerial vehicle.

One company exploiting the concept of a battery/ultracapacitor hybrid power system is AFS-Trinity of Medina, Washington.  It claims to have the first practical drive train for a plug-in hybrid vehicle (PHEV), the Extreme Hybrid™, which combines the advantages of ultracapacitors and Lithium-ion batteries. Theoretically, the capacitors provide the power for swift acceleration or hill climbing and the batteries provide the energy for extended drives (up to 40 miles, anyway).  Ultracapacitors, in this scenario, remove the load from the batteries and allow longer battery life, while enabling quick recharging from regenerative braking or downhill coasting.  In their Saturn Vue prototype, this allowed the use of a smaller IC engine and claimed better gas mileage in engine only mode. 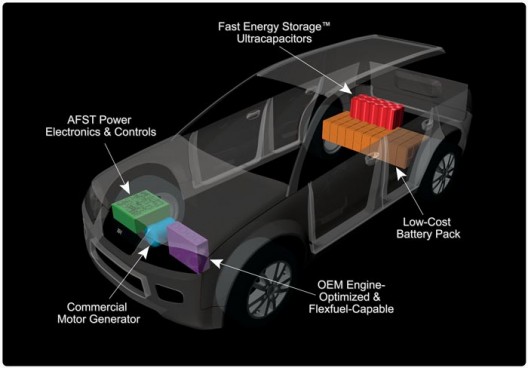 That miles per petroleum gallon figure is premised on the 40 miles per day that the (perhaps mythical) average driver commutes.  It’s also based on an 80-percent use of electricity and only 20-percent hybrid powerplant utilization. Playing with that number caused speculation and controversy when GM announced that the Chevrolet Volt would do 230 miles per gallon.  Theoretically, if you could find a plugin available at every stage of a journey consisting of short runs and long stops, you would never start the gasoline engine and achieve infinite miles per (petroleum) gallon.  Of course, we’d have to go back to sorting out the equivalent number of miles per gallon that pure electric driving would entail, and that muddies the equation considerably, depending on where you live and how your local electric provider generates its output.

It’s good to see people toiling in this rich environment, and new concepts being tried.  There is a certain win/loss ratio that goes with this new technology, and pioneers are often not rewarded or remembered as commerce shakes things out.  Whether this particular path leads to a useful answer for our future flight remains to be seen, but it’s encouraging nonetheless.