While we’ve written recently about “artificial leaves” that emulate the photosynthesis of their real counterparts, researchers have announced the discovery of a way to extract hydrogen from any plant, which “could help end our dependence on fossil fuels,” according to Y. H. Percival Zhang, associate professor of biological systems engineering in the College of Agriculture and Life Sciences and the College of Engineering at Virginia Polytechnic Institute and State University (Virginia Tech).

The school describes the process as a “breakthrough that has the potential to bring a low-cost, environmentally friendly fuel source to the world.”  Zhang has been working on the problem for over seven years, and like many pioneers, has endured the critical appraisal of those not in tune with his aspirations.

Esquire magazine in its November 2006 issue labeled Zhang’s early iteration of his idea to break down plant sugars to create cheap cellulosic ethanol and possibly even hydrogen as the “Crazy idea of the year: “sugar cars.”  Christine Ajudua, author of the piece, had a less sensational attitude toward the research than that of the headline writer, and concluded the piece with a theme that Zhang continues to sound today.

“Zhang’s formula for ‘sweet engines’ is being taken quite seriously. Virginia Tech and Oak Ridge National Laboratory have applied for a joint patent. He’s running tests at Oak Ridge through the spring, and not about to tell too much. But he will ‘dare to say’ one thing: ‘This new technology could change the whole world energy future completely.’” 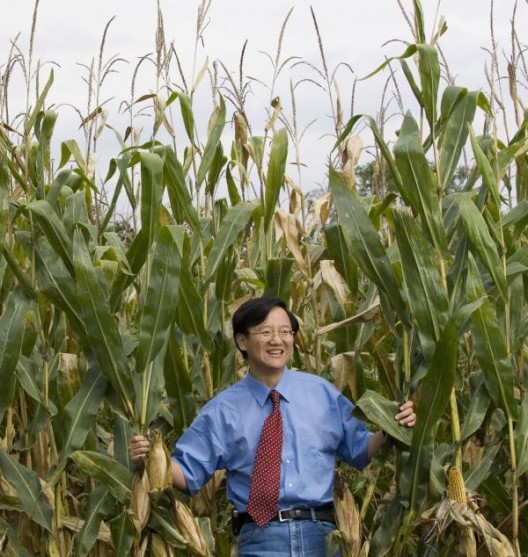 Seven years on, his team is using the abundant plant sugar xylose to produce hydrogen in quantities previously thought unattainable.  Since xylose is common to most plants, the method can use “any source of biomass,” negating the need to use vegetable matter diverted from feed lots.

The process releases no greenhouse gases and does not use costly or heavy metals, unlike previous methods.  Virginia Tech points out that, “Zhang’s discovery opens the door to an inexpensive, renewable source of hydrogen.”

The thought is echoed by Jonathan R. Mielenz, group leader of the bioscience and technology biosciences division at the Oak Ridge National Laboratory, but not affiliated with Zhang’s research.  Mielenz adds, “The key to this exciting development is that Zhang is using the second most prevalent sugar in plants to produce this hydrogen.  This amounts to a significant additional benefit to hydrogen production and it reduces the overall cost of producing hydrogen from biomass.”  Mielenz notes the process could reach commercial use in as little as three years, “if the technology is available.”

Economic factors could favor rapid development of that technology.  “The potential for profit and environmental benefits are why so many automobile, oil, and energy companies are working on hydrogen fuel cell vehicles as the transportation of the future,” Zhang said. “Many people believe we will enter the hydrogen economy soon, with a market capacity of at least $1 trillion in the United States alone.”

Zhang and his team have spent the seven years since the Esquire article studying enzyme combinations, discovering novel enzymes, and engineering enzymes with desirable properties to help free high-purity hydrogen.  This “liberation” takes place at 122 degrees F and at normal atmospheric pressure, which contributes to the low-cost of the process.

Xylose makes up as much as 30 percent of plant cell walls, but Virginia Tech researchers had to combine the xylose with other enzymes to make a “customized enzyme cocktail resulted in the production of about three times as much hydrogen as other hydrogen-producing microorganisms.

Virginia Tech explains the benefits of their technology. “The energy stored in xylose splits water molecules, yielding high-purity hydrogen that can be directly utilized by proton-exchange membrane fuel cells. Even more appealing, this reaction occurs at low temperatures, generating hydrogen energy that is greater than the chemical energy stored in xylose and the polyphosphate. This results in an energy efficiency of more than 100 percent — a net energy gain. That means that low-temperature waste heat can be used to produce high-quality chemical energy hydrogen for the first time. Other processes that convert sugar into biofuels such as ethanol and butanol always have energy efficiencies of less than 100 percent, resulting in an energy penalty.” 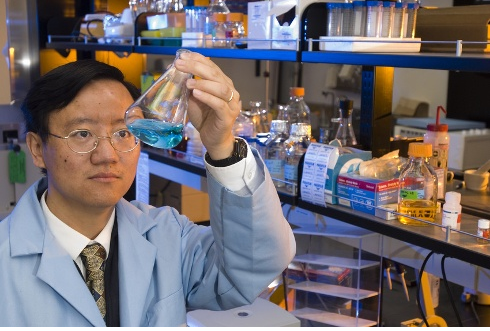 With the potential to invade the commercial market for hydrogen (around $100 billion per year) produced from natural gas, there is adequate incentive to press on.  The clean nature of the process and its use of renewables makes it a standout in energy production.  “It really doesn’t make sense to use non-renewable natural resources to produce hydrogen,” Zhang said. “We think this discovery is a game-changer in the world of alternative energy.”

The discovery is a featured editor’s choice in an online version of the chemistry journal Angewandte Chemie, International Edition, with the heading “Hot Paper.”

Support for the current research comes from the Department of Biological Systems Engineering at Virginia Tech. Additional resources were contributed by the Shell GameChanger Program, the Virginia Tech College of Agriculture and Life Sciences’ Biodesign and Bioprocessing Research Center, and the U.S. Department of Energy BioEnergy Science Center, along with the Division of Chemical Sciences, Geosciences and Biosciences, Office of Basic Energy Sciences of the Department of Energy.  The lead author of the article, Julia S. Martin Del Campo, who works in Zhang’s lab, received her Ph.D. grant from the Mexican Council of Science and Technology.