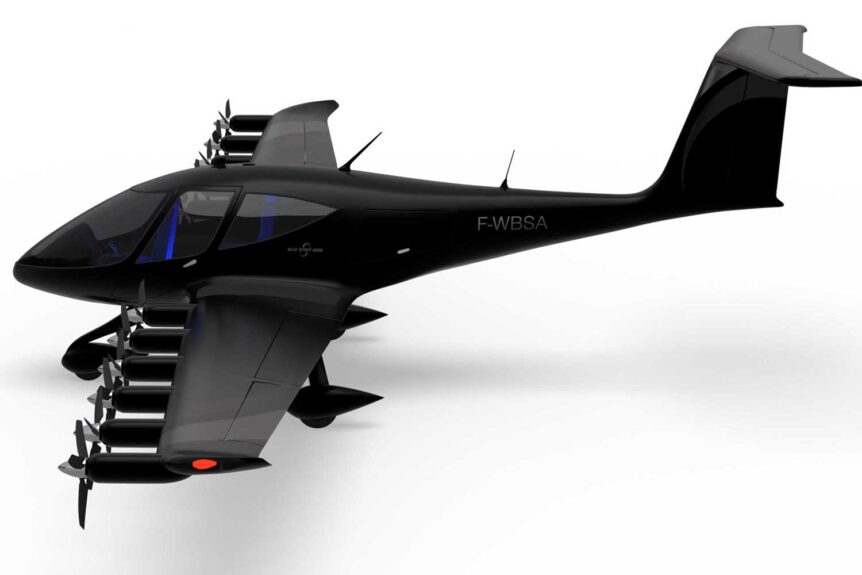 Hydrogen capsules, quickly swappable and motor pods easily switched on a long wing share a common theme.  H2-Mobile, a French web site, shared three stories that share forms of encapsulation, one pointing back to a story your editor wrote about a decade ago. 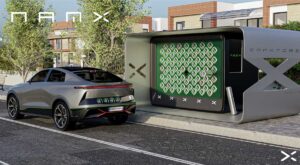 NaaX concept car with cartridge swap site. Car can hold up to six of these containers to increase mileage

A French-Moroccan company, NamX showed a car co-developed with Pininfarina, and the sleek sedan reportedly can hit 294 kilometers per hour (182 mph) and accelerate from zero to 100 kilometers per hour (62 mph) in 4.3 seconds.  Most surprising, perhaps is the car’s method of storing energy.

Michael Torregrossa, writing in H2-Mobile, reports that, “Present for the first time at the Paris Motor Show, NamX lifts the veil on its NAMX hydrogen capsule distribution device.  Called CapXtores, this new network will begin its deployments in 2024.”  Seemingly a larger version of a capsule battery distribution system created for Gogoro, a Taiwanese scooter manufacturer, the NamX concept car can be refueled with up to six H2 capsules, pulled from a roadside stand.

Even earlier, a scooter rental firm in Hawaii tried swappable hydrogen capsules and a French electric bicycle outfit used screw-in canisters that looked like oil filters to power their small vehicles.  NamX uses up to six canisters to supplement the single fixed H2 tank in the car, enabling up to 800 kilometers (496 miles) range.

The system will be deployed in 2024 according to NamX, and vehicle sales will commence in 21025.  One economic benefit, H2-Mobile reports, “The CapXtores represent a unit cost more than 50 times lower than the construction of a service station delivering hydrogen.”

Torregrossa reports in the same issue, “First American airline, American Airlines has just formalized a strategic stake in Universal Hydrogen, an entity specializing in the distribution of hydrogen for the aviation sector.  Although not the first investor, American leads other U. S. based carriers in such an investment.  Europeans and Asians have been in the forefront, with Airbus Ventures, GE Aviation and Toyota Ventures also injecting capital into the company.

We’ve reported on Universal Hydrogen before.  It uses much larger capsules to refuel its initial batch of DeHavilland Dash Eight aircraft.  This modular system eliminates the need for new airport infractructure while expediting the refueling process.  This is all part of American’s 2050 goals for carbon-free flight.

According to H2-Mobile, “Universal Hydrogen plans to begin deliveries of hydrogen for regional aircraft in 2025 before tackling larger aircraft by the end of the decade.”

A smaller form of H2 aviation, Blue Spirit Aero is promoting a multi-motor four-seat craft with a different form of encapsulation.

Adeline Adelski, writing in H2-Mobile explains the French company is developing a prototype hydrogen aircraft with multiple motors (12!) intended for flight schools.  One wonders if such exposure to multi-motor ships will qualify novices for higher ratings.

Starting in 2020, BSA went through concept development to numerical simulations, then in 2021 to a preliminary design based on creation of a digital twin and optimization of the craft’s overall architecture.  This year, the team went through in-flight fuel cell testing, a “wind tunnel campaign,” and flying a radio-controlled mockup of the proposed airplane.

In 2023, BSA will build a proof or concept prototype and perform ground tests.  The following year should see flight testing of a full-size demonstrator, with the launch of production along with a campaign following CS-23 regulations of the European Aviation Safety Agency (EASA) leading to certification in 2026.

With green hydrogen suddenly becoming available in large enough quantities,  more developers seem intent on capitalizing on its potential.  Seeing the range of vehicles that can be propelled by this green energy source, we can hope for a carbon-free future.