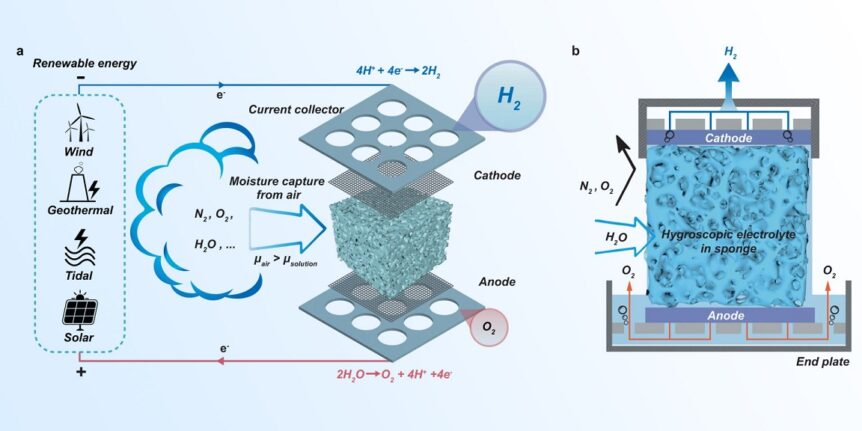 Extracting “green” hydrogen from thin air may be a saving grace in attempts to produce clean energy.  Normally, water splitting to produce oxygen and hydrogen requires large amounts of preferably pure water, a rare substance in much of the world.

Science News headlines its article, “To overcome the water shortage problem in the case of widespread deployment of hydrogen production, a team of researchers from Australia, the United Kingdom and China has demonstrated a method of producing high purity hydrogen from the air by using hygroscopic electrolyte soaked in a porous medium as the moisture absorbent.”

GreenCarCongress notes researchers at [The University of] Melbourne have demonstrated a way to extract hydrogen directly from air via the capture of freshwater using “a hygroscopic electrolyte and subsequent electrolysis powered by solar or wind.”

Pulling water from the air to perform water splitting could be a daunting prospect, but researchers found they could squeeze sufficient amounts from air with as low as four percent humidity.  Dry kilns for wood typically achieve six to eight percent moisture content in wood used in construction.  Humidity varies around the world, but Melbourne’s process still enables squeezing enough moisture from the most arid areas to enable H2 production. 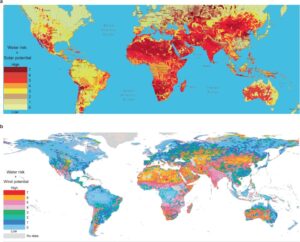 A water risk and solar energy potential; b water risk and wind energy potential (excluding coast areas).. Source: World Resources Institute (WRI); Technical University of Denmark – Creative Commons Attribution International 4.0 License.  Researchers have demonstrated that even in arid locales such as Australia’s Outback, solar and wind can pull water and hydrogen from air with humidity as low as four percent

The team reports, “In this work, we corroborate that moisture in the air can directly be used for hydrogen production via electrolysis, owing to its universal availability and natural inexhaustibility — there are 12.9 trillion tons of water in air at any moment which is in a dynamic equilibrium with the aqua-sphere. For example, even in the Sahel desert, the average relative humidity (R.H.) is about 20 [percent], and the average daytime R.H. at Uluru (Ayers Rock) in the central desert of Australia is 21 [percent].”

Researchers concluded, “Considering deliquescent materials such as potassium hydroxide, sulfuric acid, propylene glycol can absorb water vapor from a bone-dry air….” they could do even better with a specific hygroscopic electrolyte. 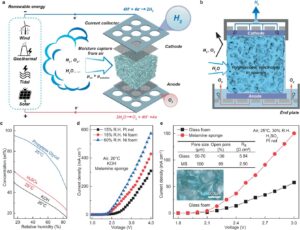 (a) A schematic diagram of the DAE module with a water harvesting unit made of porous medium soaked with the hygroscopic ionic solution. (b) A schematic diagram of the cross-section of the DAE module, showing the electrodes are isolated from the air feed, and the absorbed water are transported to the electrode by capillaries of the sponge. (c) Equilibrium water uptakes of hygroscopic solutions at different air R.H. (d) J–V curves for DAE modules using Pt or Ni electrodes sandwiched with KOH electrolyte (in equilibrium with 15% and 60% R.H. at 20 °C) soaked in a melamine sponge. (e) Effect of sponge materials on J-V performance of DAE modules using H2SO4 electrolyte in equilibrium with 30% R.H. at 25 °C. The inset shows the optical micro image for the glass foam. Guo et al.

That sponge-like electrolyte could capture the water, but a current of up to 557 milli-Amperes per square centimeter was applied to cause a Direct Air Electrolysis (DAE).  Relatively low current, with a Faradic efficiency of 95 percent, converted the open air to 745 liters ( 196.8 U. S. gallons) of liquid hydrogen each day of operation.  The five-module array managed this over 12 days without added water or human intervention.  Faradic efficiency refers to the ability of electric current flowing over the electrodes on each module to generate oxygen from the anode and hydrogen from the cathode.  One possible drawback is that the water produced may not be potable because of acids used in the process.

Researchers explain, “A solar-driven prototype with five parallel electrolyzers has been devised to work in the open air, achieving an average hydrogen generation rate of 745 Liters of H2 [per]day; and a wind-driven prototype has also been demonstrated for H2 production from the air. This work opens up a sustainable pathway to produce green hydrogen without consuming liquid water.” 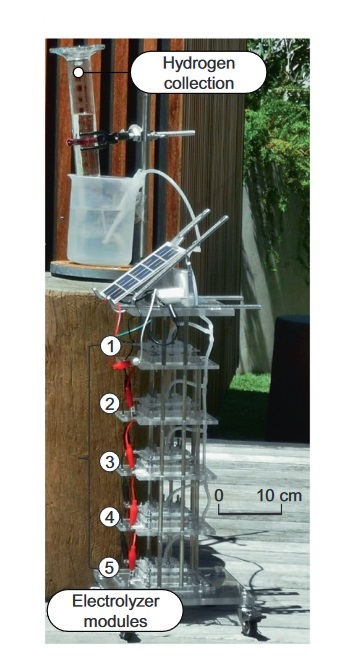 Melbourne’s DAE tower uses five solar-powered electrolyzers to run current across their individual cathodes and anodes.  This tower could also be run from wind power or a combination of clean electricity generation

Researchers tried several hygroscopic materials including an acid, a base, and a salt.  All succeeded in pulling water from the air.  Applying varying levels of current across the surface of the DAE apparatus, coupled with a corresponding voltage, caused the oxygen and hydrogen in the water to split and be collected.  This seems to be possible under a wide range of humidity and temperatures.  With a world either too wet or too dry and subject to wide-spread clean water shortages, pulling energy sources from air is welcome.