Probably not, but we are edging closer to when H2-powered vehicles (including small aircraft) might be as ubiquitous as Prius’s or Leafs – but there are significant barriers to overcome.

Fuel cell-powered aircraft might make sense eventually from a physical and economic sense, and while new technologies show promise for EV use, hydrogen power still has barriers to overcome before we’re able to exploit the environmental benefits of hydrogen power.  The appeal of a fuel cell to burn hydrogen and leave behind only a light mist of water still dazzles, but teasingly eludes us, not so much from a technical standpoint – but from environmental and economic ones.

Fuel cells come in many varieties, with proton exchange membrane (PEM) and solid oxide fuel cells (SOFC) types heading the list for practical vehicle use.   PEM cells, according to Fuelcell.org, “operate at relatively low temperatures, have high power density, and can vary output quickly to meet shifts in power demand. PEMs are well-suited to power applications where quick startup is required, such as automobiles or forklifts. Single PEM units range from several watts to several kilowatts, and can be scaled into larger systems.”

The same source explains SOFCs.  “High-temperature SOFCs are capable of internal reforming of light hydrocarbons such as natural gas, but heavier hydrocarbons (gasoline, jet fuel) can be used, though they require an external reformer. There are two configurations of SOFC fuel cell systems: one type uses an array of meter-long tubes, and another uses compressed discs.”

Not That Many Full-Sized H2-Powered Aircraft So Far

Boeing engineers managed to fly the first fuel-cell-powered light aircraft in 2008.  The modified Diamond Dimona craft took off and climbed on a combination of fuel cells and batteries driving an electric motor.  Others followed, with Lange Aviation producing the H-2, an Antares motorglider with hydrogen pods under its wings.  A longer-range version, the H-3, is projected, and would have additional pods.  The company claims that its Antares is the first human-carrying, only hydrogen-powered aircraft, although it might be a close call between that and Gerard Thevenot’s cross-channel trike (see below). 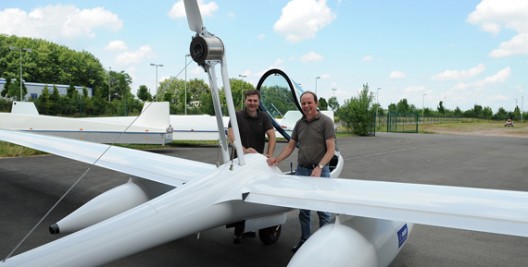 The Antares DLR-H2 with Josef Kallo of the German DLR (much like our NASA) and Axel Lange, the aircraft’s designer

Two fuel cell aircraft were entered in the Berblinger competition in 2011, both having flown successfully on hydrogen and both having achieved firsts and records in their classes.

Professor Gulio Romeo, of the Technical University in Turin, Italy (POLITO), fielded his RAPID 200 Fuel Cell, which had been tested in six test flights up to the time of the contest.  Take-off and climb can from the 35 kilowatts (50 horsepower) combined fuel cell and battery power.  Level flight speeds up to 160 kilometers per hour (99.2 mph) were achieved on fuel cell power only.  Professor Romeo’s airplane set a world speed record of 135 km/hr. and an endurance of 39 minutes during several flights conducted under FAI observation.   The Berblinger people reported that the airplane had flown 2.5 hours up to December, 2010 and covered 237 kilometers (147 miles), all trouble free. Very little has been reported since 2011 on this aircraft. 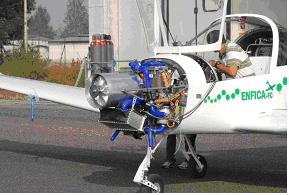 Gérard Thevenot, flying a La Mouette hang glider “trike” with an Eck/Geiger HPD-10 motor is probably the first true H2 flier.  Quoted in an Aero-Expo write-up, he said, “We can fly for the first time without auxiliary battery alone with the power of the fuel cell.” He made it across the English Channel on the 100th anniversary of Bleriot’s crossing, using about 550 grams of hydrogen per flight hour.  A five-liter bottle of H2 would keep the 55 kilogram (121 pound) airplane aloft for about an hour.  Later, another pilot flew the trike from Cozumel to the Central American mainland, a 10 kilometer (6.2 mile) hop. 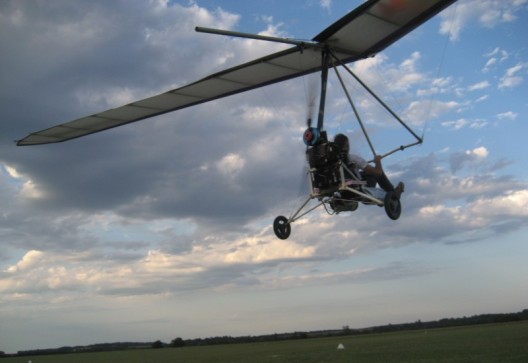 For whatever reason, nothing other than continued drone flights using H2 seem to have been reported since 2011 in the general aviation size range.  (This despite a Berblinger meeting in 2013 which seemed for focus on technology if not flight demonstrations or contests.)  Boeing and Aerovironment have produced and test flown larger hydrogen-powered craft, although the Phantom Eye by Boeing uses highly modified internal combustion engines to burn the fuel, rather than relying on electric motors powered by fuel cells.

With this static state of affairs in aircraft development, we will next turn to the production of hydrogen for vehicle use, and the issues facing its distribution and deployment.  We are about where gasoline-powered cars were when they began supplanting horses and buggies – up against the prevailing technology and confronted, in the present instance, by well-financed and increasingly entrenched completion.  Whether fuel cells are just the “BS” asserted by Elon Musk, or whether they will prove a formidable opposition to current tech, will provide a fairly turbulent and competitive coming decade, in this writer’s opinion.

Next: How we get H2 and how we might make it competitive with batteries.