Hydrogen, two atoms of which are in every molecule of water, is wildly abundant, but elusive to extract for our transportation needs.  Common means of pulling the H2 from the H2O used fossil fuels, and thus negate the good intentions for its use.  Several people have tried cleaner means of “splitting water,” including Daniel Nocera of MIT and Harvard, and researchers around the world, including those in the Netherlands and Germany.  One notable recent accomplishment at the HZB (Helmholtz Zentrum Berlin) Institute for Solar Fuels involves a new composite photocathode that generates H2 “with high quantum efficiency” using sunlight.

The Institute says, “The photocathode consists of a thin film of chalcopyrite produced by HZB/PVcomB coated with a newly developed thin film of photo-resistant titanium dioxide (TiO2) containing platinum nanoparticles.” 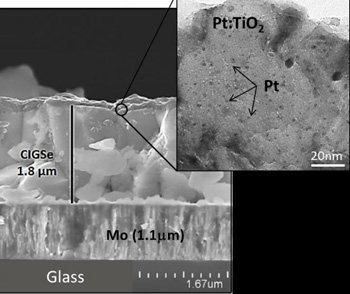 Of course your editor, who wishes he had taken better notes in chemistry class, Googled the unfamiliar term.  A University of Michigan note on CuFeS2 – Copper Iron Sulfide explains, “Chalcopyrite was the mineral upon which Bronze Age civilizations were built. Within the last century, it also became the mineral foundation for our modern electrical age. Our primary source of copper, chalcopyrite’s name comes from the Greek words ‘chalkos’ and ‘pyrites’, which respectively mean ‘copper’ and ‘striking fire’. With its metallic luster and bright golden color, chalcopyrite can fool people into thinking it is gold. It is one of two minerals, the other being pyrite, that are commonly known as ‘fool’s gold’”.

With its pricey components, the layer covering the chalcopyrite film protects it from corrosion and acts as a catalyst, speeding formation of hydrogen and acting as a photodiode showing “photoelectric current density and voltage comparable to those of a chalcopyrite-based thin film solar cell.”

Electrodes used in splitting water, such as platinum or platinum-iridium alloys, are usually from the pricier side of the periodic table.  Despite the platinum nanoparticles in the coating over the chalcopyrite, the “fool’s gold” photocathode helps keep the price of these devices in a moderate range.

The polycrystalline TiO2 film contains a small amount of platinum in the form of nanoparticles, and produces “under sun light illumination a photovoltage of almost 0.5 volts and very high photocurrent densities of up to 38 mA/cm2; secondly, it acts as a catalyst to accelerate the formation of hydrogen, and finally, it is chemically protected against corrosion as well.”

To make the coating , “titanium dioxide and platinum precursors are dissolved in ethanol and converted to a fog using an ultrasonic bath.”  As shown in the video, the “fog” spreads over the heated chalcopyrite substrate and “grows” a thin film in time, coating the substrate and embedded platinum nanoparticles.

Azarpira and her colleagues varied the amount of platinum in the precursor solution to optimize the properties of the novel composite photoelectrode device, finding best performance with about five-percent platinum (H2PtCl6) in the precursor solution   Schedel-Neidig reports, “ More than 80 percent of the incident visible sunlight was photoelectrically converted by this composite system into electric current available for the hydrogen generation, ” losing little light and attaining a high quantum efficiency.

That means little light is lost and the quantum efficiency is virtually very high. A recent article reports the composite shows high long-term stability over 25 hours and reveals large photoelectrocatalytic activity of about 690 hydrogen molecules produced per second and per active center at the surface under illumination.

As with all such research, much remains to be done.  1.8 Volts required between the composite photocathode and a platinum counter electrode still comes from a battery. Hence the solar-to-hydrogen efficiency has to be clearly improved.

Schedel-Niedig remains optimistic, saying the team “demonstrate[d] the feasibility of such future-oriented chemical robust photoelectrocatalytic systems that have the potential to convert solar energy to hydrogen. “ Working with a company in Schwerin, the team developed and tested a demonstrator device for solar hydrogen under the Light2Hydrogen project.

The team reports on their research in their paper, “Efficient and Stable TiO2:Pt-Cu(In,Ga)Se2Composite Photoelectrodes for Visible Light Driven Hydrogen Evolution. “ in the journal, Advanced Energy Materials.

The abstract for that paper reads: “Novel thin film composite photocathodes based on device-grade Cu(In,Ga)Se2 chalcopyrite thin film absorbers and transparent conductive oxide Pt-implemented TiO2 layers on top are presented for an efficient and stable solar-driven hydrogen evolution. Thin films of phase-pure anatase TiO2 are implemented with varying Pt-concentrations in order to optimize simultaneously i) conductivity of the films, ii) electrocatalytic activity, and iii) light-guidance toward the chalcopyrite. Thereby, high incident-photon-to-current-efficiencies of more than 80% can be achieved over the full visible light range. In acidic electrolyte (pH 0.3), the most efficient Pt-implemented TiO2–Cu(In,Ga)Se2composite electrodes reveal i) photocurrent densities up to 38 mA cm−2 in the saturation region (−0.4 V RHE, reversible hydrogen electrode), ii) 15 mA cm−2 at the thermodynamic potential for H2-evolution (0 V RHE), and iii) an anodic onset potential shift for the hydrogen evolution (+0.23 V RHE). It is shown that the gradual increase of the Pt-concentration within the TiO2 layers passes through an efficiency- and stability-maximum of the device (5 vol% of Pt precursor solution). At this maximum, optimized light-incoupling into the device-grade chalcopyrite light-absorber as well as electron conductance properties within the surface layer are achieved while no degradation are observed over more than 24 h of operation.”