The expense of platinum catalysts has been an impediment to the development of fuel cells and metal-air batteries.  Scientists at Stanford University may have found an inexpensive, higher-performance alternative in “unzipped” carbon nanotubes that show an imperfect face to the world.

Findings published in the May 27 online version of the journal Nature Nanotechnology quote chemistry professor Hongjie Dai, co-author of the paper.  “Platinum is very expensive and thus impractical for large-scale commercialization. Developing a low-cost alternative has been a major research goal for several decades.”

With platinum ranging from almost $800 to over $2,200 an ounce, carbon nanotubes, with their conductivity and inexpensive production costs provide a desirable combination of performance and price.

Nanotubes are rolled-up sheets of graphene, a one-atom thick layer of pure carbon – 10,000 times narrower than a human hair. 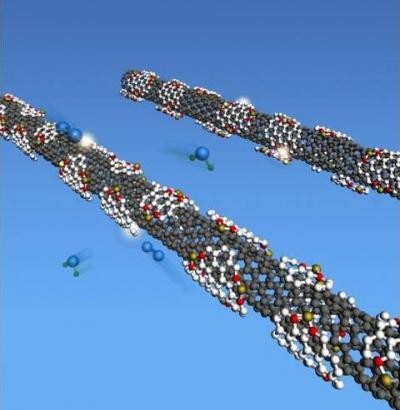 Dai’s team nested two or three nanotubes, each smaller than the next layer outward, an amazing feat considering the submicroscopic size of the tubes.   To promote a catalytic reaction in the otherwise near-perfect tubes, the Yanguang Li, lead author of the study, treated the multi-walled tubes in a chemical solution that “shredded” the outer wall while leaving the inner walls intact.

Li, a Stanford postdoctoral fellow at Stanford, explains, “A typical carbon nanotube has few defects, but defects are actually important to promote the formation of catalytic sites and to render the nanotube very active for catalytic reactions.”

The partially “unzipped” outer nanotube formed nanosized graphene pieces that clung to the mostly intact inner nanotube, according to the study.  Adding “a few iron and nitrogen impurities” helped the outer wall become an active catalyst, while the inner wall(s) retained their structure and electrical conductivity.

Li added. “We found that the catalytic activity of the nanotubes is very close to platinum,” he said. “This high activity and the stability of the design make them promising candidates for fuel cells.”

Fuel cell experts are now testing the nanotube, with the hope that the nanotubes will have high efficiencies and long life.  These tubes may work in zinc or lithium metal-air batteries.

The Stanford web site further quotes Dai. “Lithium-air batteries are exciting because of their ultra-high theoretical energy density, which is more than 10 times higher than today’s best lithium ion technology, but one of the stumbling blocks to development has been the lack of a high-performance, low-cost catalyst. Carbon nanotubes could be an excellent alternative to the platinum, palladium and other precious-metal catalysts now in use.”

An added benefit of the study is sorting out a conflict between those think that iron impurities are bonded to nitrogen at the active site, and a second group that believes the iron does not add to the overall reaction but promoting active sites made entirely of nitrogen.

Specroscopic analysis by scientists at Oak Ridge National Laboratory showed “clear, visual evidence of iron and nitrogen atoms in close proximity,” marking a first imaging of individual items on this kind of catalyst.

Dai added, “All of the images showed iron and nitrogen close together, suggesting that the two elements are bonded. This kind of imaging is possible, because the graphene pieces are just one-atom thick.”

Dai Lab’s press release concludes, “Dai noted that the iron impurities, which enhanced catalytic activity, actually came from metal seeds that were used to make the nanotubes and were not intentionally added by the scientists. The discovery of these accidental yet invaluable bits of iron offered the researchers an important lesson. ‘We learned that metal impurities in nanotubes must not be ignored,’ Dai said.”