What if, instead of using corn to make ethanol, we were to use corn stover, the waste stalks, leaves and non-edible portions of the corn plant?  It’s not a new or novel idea, but Michigan State University researchers have taken a new direction in extracting energy from it.

The East Lansing research team has managed to produce 20 times more energy than through the use of existing methods by using microbes to “produce biofuel and hydrogen, all while consuming agricultural wastes.” 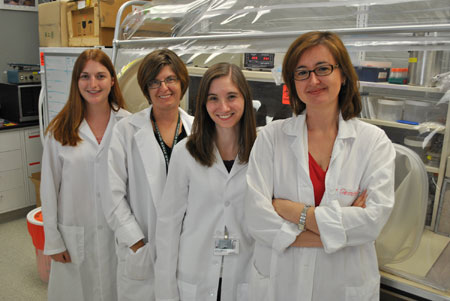 The method combines biological, chemical and electrical reactions to generate fuel and energy.  Gemma Regurera, an MSU microbiologist,” has developed bioelectrochemical systems known as microbial electrolysis cells, or MECs, using bacteria to break down and ferment agricultural waste into ethanol.  Reguera’s platform is unique because it employs a second bacterium, which, when added to the mix, removes all the waste fermentation byproducts or nonethanol materials while generating electricity,” according to the University.

Reguera, and co-author Allison Speers, an MSU graduate student, explained the process in a paper in the ACS journal Environmental Science & Technology .

“This is because the fermentative bacterium was carefully selected to degrade and ferment agricultural wastes into ethanol efficiently and to produce byproducts that could be metabolized by the electricity-producing bacterium,” Reguera said. “By removing the waste products of fermentation, the growth and metabolism of the fermentative bacterium also was stimulated. Basically, each step we take is custom-designed to be optimal.”

Adding a second step and a second bacterium, Geobacter sulfurreducens, generates electricity, used to generate hydrogen in the MEC to recover even more energy.

“When the MEC generates hydrogen, it actually doubles the energy recoveries.  We increased energy recovery to 73 percent. So the potential is definitely there to make this platform attractive for processing agricultural wastes.”

Reguera’s fuel cells use corn stover treated by the ammonia fiber expansion process, or AFEX, “an advanced pretreatment technology pioneered at MSU. AFEX is an already proven method that was developed by Bruce Dale, MSU professor of chemical engineering and materials science.”

Dale and Reguera are both working to commercialize their processes, which could help solve the dilemma associated with the use of food crops to produce fuels.  It would also decentralize processing of fuels by allowing small and medium-size farms to create fuel from their bio waste and power themselves.  Another useful aspect of the ethanol produced is that the infrastructure for its use and distribution is already in place, and it can be used in existing gasoline powered machinery with little or no modification.

Using the hydrogen produced is another matter, since the means of using it are not in wide distribution, but its inexpensive sourcing would certainly make it a desirable commodity.

Pennsylvania State University has also explored MECs to produce ethanol and hydrogen, with slightly differing approaches but similar results.  The Penn State MEC is shown below. 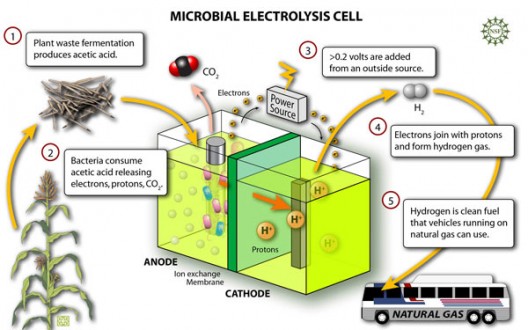 An MEC similar to that used in MSU research

The use of non-food stocks for energy production is likewise desirable, since the ethical and logistical problems associated with biofuels are starting to be sharply etched in the public mind.  The Guardian recently reported, for instance, on European Union companies forcing poor Guatemalan farmers from their lands to allow factory farming of biofuel crops.  This becomes not only an environmental concern, but a moral and political one (if the two opposing concepts can be combined).

Reguera and Speers’ work can be seen in “Consolidated Bioprocessing of AFEX-Pretreated Corn Stover to Ethanol and Hydrogen in a Microbial Electrolysis Cell,” published in Environmental Science & Technology.