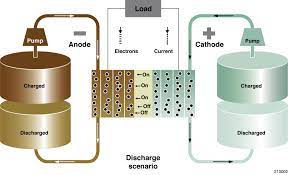 Influit Energy, a spinoff from Illinois Institute of Technology, is going commercial in a big way.  They claim to have developed a “rechargeable electrofuel – a non-flammable, fast-refueling liquid flow battery that already carries 23 percent more energy than lithium batteries, at half the cost.”  Reporting by Loz Blain in New Atlas.com notes the company plans “to commercialize its ultra-high density liquid batteries.”

The flow battery design passes anolyte and catholyte liquids past each other on either side of an ion exchange membrane to generate current. The system needs four tanks, for spent and unspent fuels, and it works in reverse when electricity is fed back into the system

The firm’s “nanoelectrofuel,” a motor-oil consistency liquid, would refuel a vehicle with a special four-point nozzle.  The process would allow users to be on the road or in the air in a few minutes, rather than a few hours as with batteries.  Like a battery, the liquid comes with a positive and negative component – two liquids – an anolyte and a catholyte instead of a more solid anode and cathode.  The system requires four tanks – one each for incoming positive and negative liquids and one each for spent liquids that return to the supply source for recycling.

Anolytes and catholytes flow into two tanks and are separated by an ion-exchange membrane, much like that of a battery separator that keeps positive and negative components apart.  Once consumed, the fuels transfer to tanks that store them until they’re removed.  This part of the equation seems to add complexity and weight to the system.

There are beneficial aspects of the nanofuel, however, that would encourage its use as an aircraft fuel.  In two videos, it shows remarkably safe qualities.  First, it resists open flames:

Then it resists the kind of explosive behavior lithium batteries exhibit when punctured:

That level of safety, combined with reasonable performance estimates, could make the nanofuel battery a plausible choice.  Influit claims an initial volumetric energy density of 350 to 550 Watt-hours per liter for its Gen 1 batteries at the system level, and a potential 550 to 750 Watt-hours per kilogram mass energy density for its Gen 2 offerings.

With lithium prices ready to increase in the next two months, according to GreenCarCongress.com, low-cost ingredients may help overcome the problem of providing a new infrastructure for flow batteries.  “Trading Economics global macro models and analysts expectations forecast battery-grade lithium carbonate to trade at 504,813 [Chinese Yuan] CNY (US$74,000) per ton in 12 months time. Lithium is expected to trade at 484,185.00 by the end of this quarter.”

Gravimetric and volumetric numbers encourage its use as an aircraft “fuel,” though, with NASA giving it a close look.  NASA has provided a graphic overview of all the projects centered on nanoelectrofuel (NEF) and rim driven motor (RDM) technologies.

In a 107-page white paper, “Design and Development of Nano-electro Fuel Batteries and Rim-driven Motors for Electrified Aircraft Applications,” Kurt Papathakis explains how the RDM and NEF battery can be integrated into a single compact unit.  Several advantages accrue. 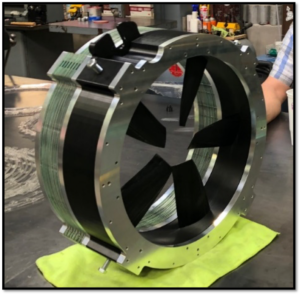 “The RDM generates torque at the outer diameter of the spinning structure, rather than at the hub; the RDM is lighter and more efficient than conventional designs because of its ability to produce higher rotor-tip speeds. At a set power and larger relative radii, the motor provides a large torque advantage (meaning the current can be reduced; therefore, reducing both mass and increasing efficiency). The unique form factor provides a large surface area for cooling and allows for many integration benefits when coupled with the co-located NEF stack. The absence of a hub reduces drag, cabling, and eliminates support struts; thus, reduced blade passes of the fan across static structures occurs, resulting in the overall reduction of the acoustic footprint. Concentrating the motor mass around the outside of the duct also allows for tighter structural integration, resulting in shared structural support of the wing, battery, and motor. Potentially, thermal management can be combined between the battery, motor, and duct skin.

New Atlas explains the need for a complete infrastructure to support the technology.  “This will require a whole ecosystem; Influit is developing not only the electrofuel liquids, but the fuel cell-like onboard devices that’ll extract energy from those fuels, the complex tank and fuel management systems that will keep the fluids separate and retain the spent fuel for recycling, the electrofuel retail equipment, the systems needed to “recharge” spent fuel, and the refineries needed to manufacture these nanofuel liquids in the first place.

“There will be multiple ways to top up once you’re running low. ‘Rapid refueling pods’ will offer the ability to straight-up swap spent fuel out and put fresh stuff back in. But Influit says you won’t lose your ability to plug in and recharge the fuel in the same way EV owners do now – either slowly through a wall socket, or rapidly through a higher-power charging station.

“NASA has funded the development of fast charging systems, and the US Air Force has funded work on the refueling nozzles and control systems, as well as contributing toward the development of that super-high density Gen2 fuel system. And Influit says it’s already demonstrated a nanoelectrofuel battery system for an electric utility vehicle at the premises of another commercialization partner.

“[Influit Energy’s research] started back in 2009 as a basic science investigation when we were at Illinois Tech and Argonne National Laboratory, and we have taken our technology from basic science development, to applied science, to building prototypes, and now our first product development.”

Influit co-founder and CEO John Katsoudas explains, “Everything we’re doing right now is geared toward the specific goal of developing what we call the closed-loop energy cycle, whereby your batteries are not solid materials, they are liquids. You can treat the battery as a fuel that gets pumped in to mobility devices—cars, trucks, airplanes, anything that needs to be electrified. Every one of our contracts is funding a different aspect of the totality development of that ecosystem. All of the technology has come together – we have a crystal-clear path before us.”

A Longer History Than One Would Expect 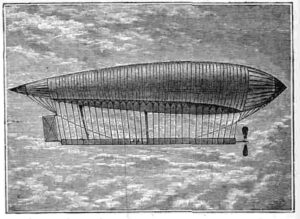 La France was powered by a flow battery in 1884

We’ve reported on flow batteries several times in this blog, noting they go back to the beginnings of electric aviation (1884!).