At the third annual Electric Aircraft Symposium in San Carlos, California in 2009, designers from Germany and Slovenia showed their plan for a hydrogen-powered aircraft called Hydrogenius.  Today, a newly constructed, battery-powered “e-Genius” (developed along parallel lines with Hydrogenius) will be Eric Raymond’s mount for the July 10-17 Green Flight Challenge in Santa Rosa, California.  Eric writes that “e-Genius is now flying, and has reached the required 100 mph.” e-Genius’s 60 kilowatt (80.4 horsepower) motor is claimed to be able to fly 100 kilometers (62 miles) on the electrical equivalent of a mere 0.6 liters (0.16 gallons) of gasoline, or about 392 miles per gallon.  As a comparison, Europeans are enamored of the “3-liter car,” a vehicle that travels 100 kilometers on three liters of fuel.  This works out to 78.4 miles per gallon, something not achieved by even the best production hybrids at this time. 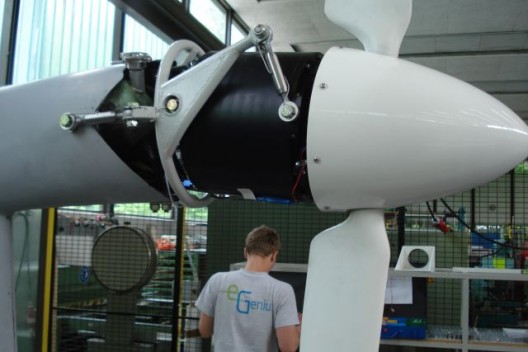 Design actually started several years ago, with the goal of entering Hydrogenius in the 2006 Berblinger competition.  The faculty of Aerospace and the Institute of Aircraft Design at the University of Stuttgart partnered with Pipistrel in Slovenia on different aspects of the design, which even in its initial phases could accommodate either a “lean fuel cell system with backup battery,” or a “lean battery system with backup battery.”  Today, its list of sponsors is impressive, including Airbus, Glaser-Dirks sailplanes, Schempp-Hirth sailplanes, and a range of equipment suppliers.  Airbus promises, “Data collected during the “eGenius” aircraft’s maiden flight will be analyzed by Airbus’ Future Projects teams to further develop the technology and better understand its opportunities.”

e-Genius’s move from hydrogen to battery power follows that of another GFC entrant.  Embry Riddle Aeronautical University’s GFC team originally intended to power its modified Stemme motorglider at least partially with hydrogen – but is now using Swift Fuel for its Rotax engine and batteries for extra power to the parallel hybrid motor.

Eric Raymond, who will pilot the aircraft in the competition, has more hours flying solar-powered aircraft than any other person, having guided Sunseeker I across the United States in 1990, and Sunseeker II over the Alps on his flight from Aero 2010 in Germany to the World Air Games in Italy.  His ability to monitor and exploit very low amounts of wattage into useful climb and range are probably unmatched, and will doubtless be highly useful in the tour around the Santa Rosa course.

In just released news, the e-Genius team announced, “Our testing pilot Sören Pedersen flew 2 hours and 36 minutes electrically without any thermal lift.”  The flight was on May 29, just three days after the craft’s initial 20-minute shakedown trial. 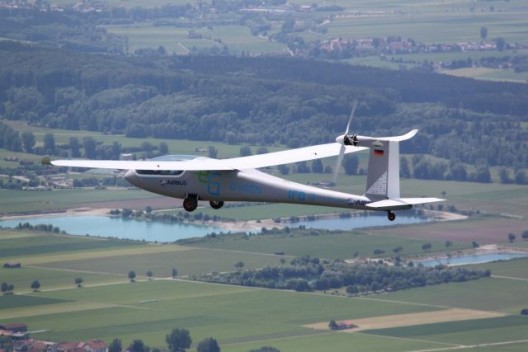