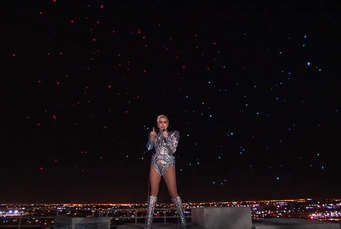 Seeing Lady Gaga perform with 300 Intel Drones at this week’s Super Bowl was the highlight of the evening for this editor, who doesn’t share the national passion for watching men in Spandex crunch helmets together.  The Lady does have a way of attracting attention, and this year, Intel helped contribute to the half-time excitement.  The literally over-the-top show didn’t hurt Lady Gaga’s revenues, as noted in this FiveThirtyEight.com report.

Lady Gaga’s digital song sales are up about 960 percent compared to the day before the Super Bowl, according to Nielsen Music. Seems like her Super Bowl halftime show was a hit. [USA Today]

Considering that the company began last May by schmoozing the FAA into permitting 100 drones to fly in a remote desert location – a first mass flight in the United States with such permissions – they have made remarkable speed in staging larger and larger demonstrations in more well-populated areas.  300 drones larked about over the Magic Kingdom in November.  Note, though, that they were positioned above a large lake for this display.

Some critics have scoffed that the Super Bowl flying was done days before the game, and that the pre-recorded segment was inserted into the actual live half-time show.  This was at the FAA’s request, since the large display would need to have been timed meticulously to match the action on the stadium floor (and weather might have played a factor).  Regulators were concerned about the safety of those below and wanted the fewest possible distractions during the recording of Lady Gaga’s rooftop portion of the show.

300 drones provided a red, white and blue backdrop for the singer’s performance of a patriotic medley, finishing with her leap from the Houston Superdome roof.  This was matched to the interior shot of her dropping on two cables and doing a number of flips on the way down to her first landing spot.  The illusion was fairly credible for TV viewers, and set off 13 minutes of frenetic performance by over 1,000 dancers and well-staged performers.

Intel has sent 500 drones into the sky for earlier displays, and the 300 at the Super Bowl were controlled by a single operator, a sign that unmanned aerial systems traffic management may be possible with the programming and logistics skills now available.  Your Amazon package or pizza may be coming to a front-yard landing zone soon.  New Zealand already has demonstrated Domino’s drone delivery, a sure-fire way to increase national obesity levels.

As one might guess, Intel is not the only enterprise interested in mass drone flights.  Syncdrones staged this display in 2012.

Such showy demonstrations make it clear that controlled flight within carefully set parameters will be possible in the near future, using near-term programming.