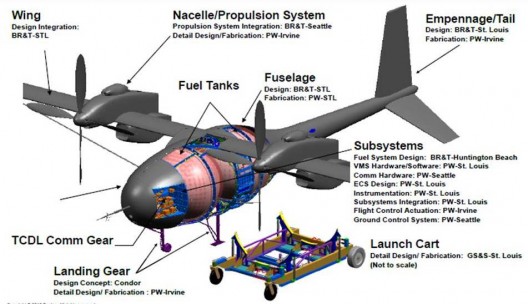 Wrapping two eight-foot diameter hydrogen tanks in a low-drag pod and boom style fuselage, the “bulbous” but aerodynamic shape seems at variance with its sailplane-like 150-foot wings.  Overall, the design’s unlikely look conceals its purpose as well as its enormous fuel tanks.

According to Aviation Week, “Boeing’s objective is a production HALE UAV [unmanned aerial vehicle] with an endurance of 10 days, which would enable it to remain on station for four days at 10,000nm [nautical miles] range, or six days at 6,000nm. Three such air vehicles would be able to maintain continuous surveillance anywhere on Earth, [Boeing Phantom Works’ Keith] Monteith says, for a dramatic reduction in cost compared with today’s 24- to 36h-endurance UAVs.”

With hydrogen’s high energy density, the twin 2.3-liter Ford engines will run for days on end, where a similar effort powered by more conventional fuels would lack such endurance and weigh a great deal more.  The lean 7,500 pound empty weight and 9,350 pound takeoff weight show the low mass that even the full hydrogen tanks add.  To further save weight and costs, the aircraft takes off on a dolly (that stays earthbound) and lands on skids.

Engines have three-stage turbochargers to compress the air at high altitudes and a gearbox to reduce the speed of the four-bladed propellers.  Flight tests are scheduled to begin soon.