Stemme, the German manufacturer of a series of highly innovative sailplanes, motorgliders and even unmanned aerial vehicles, has announced the first Green Speed Cup, which will  take place between August 7 and 13, 2011, starting from Stausberg Airfield every day.

Combining a race with an economy run, the six-day event will help illuminate the strategies different teams will use to fly “as fast as possible while minimizing the consumption of fossil fuel energy,” according to the GSC’s organizers.  Explaining that the Cup is a “a direct comparison of technologies, machines, materials and the capabilities of the pilots,” taking into account how pilots can exploit thermals and winds, Stemme expects that the competition should “practical solutions for saving energy during powered flight.”

If all goes well, “Today’s standards for cruising speed, range and endurance should be reached or exceeded as far as possible.”  The contest will support a cooperative research project between Stemme and the Technical University of Dresden. 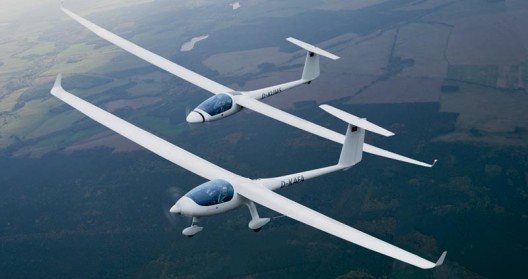 The pilot who achieves the best ratio of fuel-consumption per distance and speed each day will win 1,000 points and runners-up will have their points calculated proportional to the winner’s score.  To prepare for the race, Stemme suggests that pilots learn the best gliding speed, propeller and engine performance for their aircraft, and provides a simple test to determine those parameters.  These will vary for different thermal conditions, and will require a great deal of pilot skill and knowledge.

Almost all entrants, except for the Diamond DA40 (a four seater), are Stemme products with the company’s distinctive mid-engine location/shaft-drive, and similar wings, but different performance characteristics.  The S10-VTs with their longer wings (23 meters or 75.5 feet) and higher glide ratios (50:1) may excel if thermals are strong, but the S6Ts’ 18-meter (59 foot) wingspan and smaller wing area might allow them to power through more effectively if calm days prevail.   Interestingly, the S10s have higher cruising speeds than the S6s.

Strategies, changing daily to reflect meteorological immediacy, will probably stretch pilots to their limits of planning and in-flight judgment.

Stemme’s newletter counts 200 of their aircraft flying today, including one record-breaking S10-VT used by Klaus Ohlmann to set an FAI-certified world distance record of 2.463 kilometers (1,330 nautical miles or 1529.5 statute miles) after using the craft’s engine only to launch.

Stemme has used the efficiency of its manned aircraft to apply similar characteristics to unmanned flight.   Their S15 special-mission aircraft carries a Euroflir gyrostabilised optronics pod, remotely-operated from the ground, a Ku-band link which allows high rates of tactical data transfer, and Thales Systems search and rescue (SAR) sensors.  According to Stemme, “The Patroller is also designed to support a high-speed satellite link, plus pod-mounted payloads (sensors, arms, etc.) for 20- to 30-hour missions at a maximum altitude of 25,000 ft.  This medium altitude, long endurance (MALE) operational envelope defines a smaller vehicle than the high altitude long endurance (HALE) craft described earlier in earlier entries.”

This almost one-design competition should provide invaluable insights into how excellence in design, planning and piloting can improve the breed and lead to a greener future for aviation.