JAXA, the Japanese Aerospace Exploration Agency, has been developing a multi-discipline approach to creating an electric light aircraft, much like efforts at Airbus.  Like Airbus, its first efforts use a modified existing airframe, the Diamond Dimona HK36 TTC-ECO motorglider.  Unlike Airbus, the organization has developed its own powerplant, reporting on March 14, 2014, that they had completed performance testing of the electronic propulsion system for small aircraft, in a final test program that lasted into late 2013. 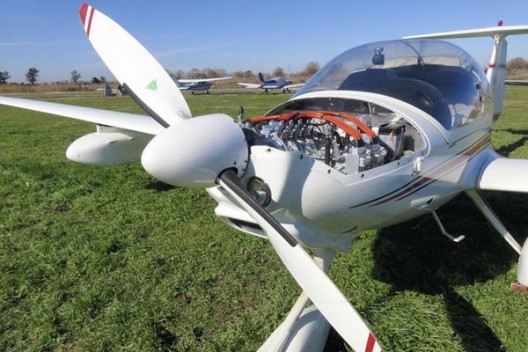 The data showed that the system had a maximum motor output of 63 kW (kilowatts) and motor efficiency levels of 94% or higher, indicating that the motor demonstrates sufficient performance for manned flight. Researchers were also able to confirm that the system fulfills the performance requirements, including the necessary durability and cooling performance levels, for flight at speeds equivalent to those in actual flying environments.”

In 2013, the organization announced it had completed testing of an important element of their motor, “a motor coil that can maintain its maximum power more than two times longer than a conventional model by using thermal conductive heat-resistant insulating material. Technology to extend the time duration of motor’s maximum power is imperative for the practical use of an electric aircraft.”  The insulated coil enables a smaller, lighter motor that will not overheat during periods of high motor output, such as climbs.  Materials for the coil were developed by Nippon Kayaku (KAYAKU), in cooperation with JAXA.

JAXA has installed a complete electric power system in the Diamond aircraft, with some pertinent enhancements which distinguish their approach.  Most notable, from a quick glance, a large pod under each wing holds the batteries that supply power to the motor.  The pods, totaling 120 kilograms (264 pounds), allow a test program with takeoff and climb at full power for one to two minutes, a trip around the field at pattern altitude (300 meters or 984 feet) using from 20 to 30 kilowatts (27 to 40 horsepower), followed by a landing.  The pods, being deployed as they are, may provide a safety factor in case of thermal runaways with the batteries.

The batteries themselves are 75 Amp-hours, 128 Volts, and arranged with 32 cells in series. 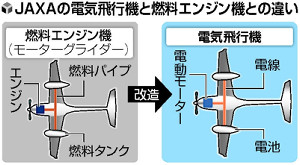 Flight Path, JAXA’s newsletter, describes the permanent magnet synchronous motor as being equivalent to the 60 to 86 kW (80.4 to 115.2 horsepower) Rotax engines it replaces, with control through a single throttle lever.  Because the motor turns over at a maximum 8,000 rpm, a reduction gear system slows things down for reasonable propeller speeds.  Although the propeller is a variable-pitch unit, it will be restricted to fixed-pitch use during tests.  An insulated-gate bipolar transistor (IGBT) controller modulates the water-cooled motor’s speed.

JAXA lists the aircraft’s cruising speed between 100 and 150 kilometers per hour (62 – 93 mph), with a single battery charge capable of powering the 850 kilogram (1,870 pound) craft through a 15-minute flight routine, “even if the pilot applies full power for around two minutes during takeoff.”  Following each circuit, the airplane will be recharged to ready it for another airport circuit.  The test team uses a long runway “so that the aircraft can glide and return to the ground safely in the event that it experiences a loss of power during takeoff.”

Like Airbus, JAXA intends to use the results of their FEATHER (Flight demonstration of the Electric Aircraft Technology for Harmonized Ecological Revolution) light aircraft tests as indicators of how electronic technology may power bigger aircraft in the future.  This may include hybrid variants including hydrogen fuel cells.  As one writer pointed out, Japan is dependent on foreign oil to run its current air fleet. Replacing foreign oil with electricity would be a great advantage for the country.