An engineer retired to southern Illinois farm country, Jerry Booker has designed and built several airplanes, his latest being the Red Tail Hawk, a Part 103-compliant self-launching ultralight sailplane.  He has flown 15 times in his new creation, maintaining meticulous notes and downloading data for review by others.  His empirical approach to testing the limits of his electric powerplant (a Randall Fisher 18 horsepower brushed motor/controller combination) and airframe represent a thorough and careful examination of a type of airplane that other homebuilders might be able to make with currently available systems. 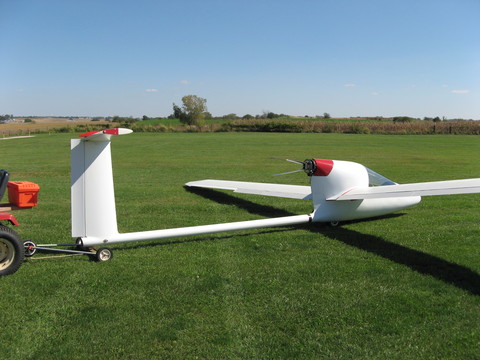 RTH shows off its eponymous empennage and folding propeller

Jerry’s flight reports are dispassionate and carefully logged, following much of the approach and including many of the criteria developed over the years by the CAFE Foundation.  He uses an EagleTree flight data recorder that was developed for model aircraft to track the ups, downs and other parameters of his flights.  He checks his airspeed against an Etrex GPS.  Jerry posts the results of each flight in the extended good weather the Midwest is enjoying, and invites critiques of his approach and findings.

His Yahoo group is moderated not only to eliminate spam, but to ensure that correspondents are credible and provide useful information for himself and his readers.  His openness allows challenges and encourages open dialogue, and there is no apparent censorship of negative opinions.   This is real science at work, openly shared.

Jerry’s flights take place in a bucolic setting, with occasional reports of geese or other wildlife that sometimes interfere with the otherwise unhurried test schedule.  The report on his fifteenth flight includes the following, “I installed and calibrated the new Eagle Tree G-Force sensor, and a new good Taylor motor heat gauge (Editor’s Note: earlier perceptions of motor heat seemed to belie the reading of a perhaps unreliable sensor), then took off to the north about 1:30.

“Cruised-climbed at about 100A out NE about 2.5 miles to be over a small plowed field and found some lift. I started circling at around 800′ AGL, but kept the power on. I didn’t want to use too much charge because I was so far out and not that high, out of the gliding landing cone.

“Was seeing 200 fpm climb over the field after shutting down the power near 1000′ AGL, but would lose it during the turn to get back into the small area of lift. I did not want to bank it into a sharp turn with so little altitude. I might have done better if I had turned the other way, but ran out of altitude to try it.”

He is considering the design and construction of a new wing, and will spend the unflyable parts of the next few months pursuing that goal.  Jerry explains, “But from what I’m seeing for the performance aspect of the RTH, I feel that the new wing and spar I have talked about in the past will need to be more seriously considered. Like maybe extending the span substantially, and a different airfoil. So I’ll be tackling that issue again after the season ends.”

His 42-foot span craft has flown missions of up to 24 minutes, and each flight brings a wealth of new information.  Jerry invites you to share in his ongoing exploration of his design and flight test procedures.  Jerry Booker will continue sharing his investigations of wings, powerplants and construction techniques, and best of all, his flying adventures.