One of the favorite speakers at the Electric Aircraft Symposia sponsored by the CAFE Foundation, Eva Håkansson is more than just a great talker. She recently topped 216 miles per hour in KillaJoule, her streamlined electric sidecar motorcycle. She built 80 percent of the 250-horsepower vehicle herself over two and one-half years. 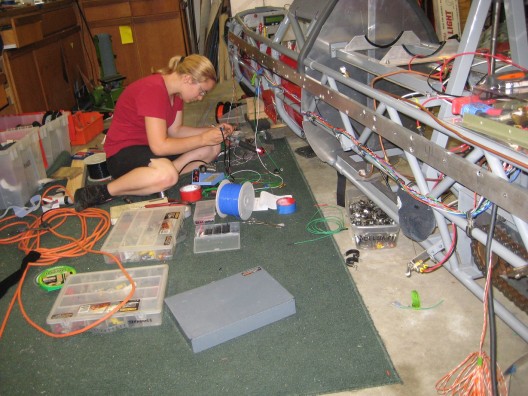 Eva soldering wiring for KillaJoule, one of the less hazardous parts of building or driving the sidecar racer

An engineering graduate student at the University of Denver, Eva and her husband Bill Dube’ hold world records on and in their electric motorcycles. Eva managed to come within three mph of the world record internal-combustion powered for sidecars on the salt flat.

She also managed a world record for the flying mile, going through the traps at 191.488 mph – the record awaiting American Motorcycle Association certification.  Overall, KillaJoule is the world’s fourth fastest electric motorcycle, and Eva is headed back to Bonneville to attempt more records. 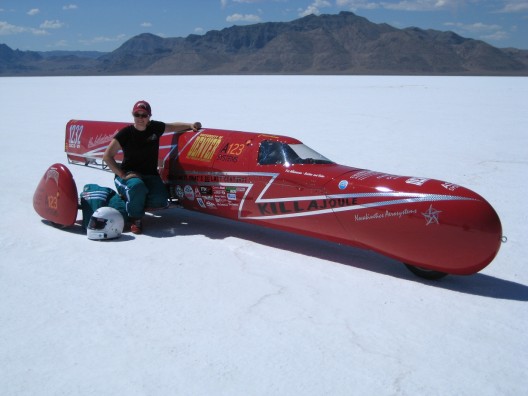 The 250 HP battery-powered motorcycle had a measured top speed of 216.504 MPH and did set a new official world record for electric sidecar motorcycles of 191.488 MPH over the flying mile (pending AMA certification). KillaJoule is currently the world’s fourth fastest electric. It won the “Fastest Sidecar Motorcycle” Prize and the prestigious “Female Rider” Award, created in 2006 by land speed record holder Erin Hunter “to acknowledge the accomplishments of the women racers at Bonneville. It recognizes the characteristics of great racers such as competition, camaraderie, enthusiasm, dedication, humility, and tenacity.”

According to Eva’s blog, “KillaJoule competes as a ‘sidecar motorcycle’, which means that it has two wheels in line and one wheel off-set. It drives only on the rear wheel and steers with the front wheel. The very fastest record ever set with an internal combustion engine for this type vehicle is 219 mph. Eva is now very close to exceeding this internal combustion world record using battery power. Last time a battery-powered vehicle set an overall speed record was 1899, when the electric car ‘La Jamais Contente’ was the world’s fastest car at 62 MPH.” 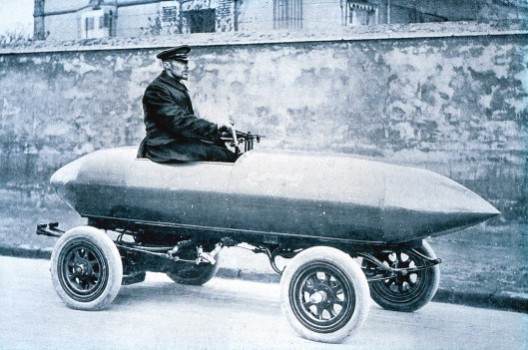 La Jamais Contente, the fastest electric car in the world in 1899

Eva wired the 375 volt, 1,800 Amp, 214 pound battery pack made from 1,210 cordless tool cells manufactured by A123Systems, a grueling and meticulous process she demonstrated at the 2010 Electric Aircraft Symposium, showing how she built a similar pack for her husband’s drag-racing KillaCycle.

EVO Electric, Ltd. supplies the AC motor and the 250+ HP inverters are made by Rinehart Motion Systems.

Earlier in the summer, Eva had inspired young women attending the Maine School of Science and Mathematics (MSSM) girls’ camp in Limestone, Maine.  Meeting with 95 campers after a day of racing at Loring Air Force Base, Evan and Bill “came to share their passion for science and engineering.” Eva had set a new world record of 188 mph the previous Saturday and was ready to explain the science behind her efforts.

One camper, Robin White, was enthused. “’The battery pack was awesome. The motorcycle looks like something that would take a lot of gas, so I was surprised that it could go so fast just on electricity.”
“For the girls at camp, Håkansson left a lasting impression. ‘I learned that if you set your mind to it, you can build anything; you can do anything,’ said Allison Johnson, a returning MSSM camper from Winthrop.”

“’I was surprised by Eva; she didn’t look like the type of girl that would build a motorcycle and weld metal’ camper Robyn White said. Indeed, with a stuffed rabbit named Bonnie S. Flats as co-pilot, Håkansson broke the mold of what some girls considered an adventurous engineer.

“Breaking down barriers that keep girls from pursuing science and math is very much what MSSM summer camp strives to do. As Håkansson pointed out, ‘Science can be really fun, and anyone can do it.’”