With only half the month gone and the Pikes Peak International Hill Climb scheduled on its last week, June 2014 has seen records crumble at the Isle of Man TT and hybrid electrical technology dominate at the 80th running of the 24 Hours of Le Mans.

The electric part of the classic road race on the tight little island between Britain and Northern Ireland saw new records for the 37 mile spin around the southern roadways – like the Le Man circuit, otherwise public roads usually dominated by farm vehicles and passenger cars.

Ohio State University’s Buckeye Racing Team ran a modified Honda CBR1000RR frame with a motor by Roman Susnik, the Slovenian who also designed the motors used in the Pipistrel G2 self-launching motorglider.  They ran a respectable third place, a great accomplishment for a college team up against the might of the winning Honda Mugen.  John McGuinness rode that $4.3 million racer to set a lap record of 117.366 mph, only 2.3 mph faster than team mate Bruce Ansley on a near-identical Shinden San.   Robert Barber rode the Buckeyes’ machine at 93.531 mph, which edged out the fourth place Belgian Sarolea team bike ridden by Robert Wilson and was 10 mph faster than the VercarMoto ridden by Mark Miller.

A dangerous event, this year’s Isle of Man TT claimed two more lives.  Overall, 242 racers have died in the last century on the Island’s narrow roads.

Despite the total wipeout of one of the Audi team’s cars, from which the driver walked away, Le Mans was a relatively safe place to be this year.  Most of the leaders were hybrids, with different technologies being put to the test, and the Nissan Zeod Garage 56 entry (an accommodation for innovative cars) put in the first all-electric lap of Le Mans and set a straightaway speed record of 300 kilometers per hour (186 mph).  The innovative hybrid did not last for the race, though, wiping out a transmission only 24 minutes into the 24-hour event.

Audi scored a 1-2 finish, but not without constant changes of the lead with Toyota and Porsche.  Audi’s Tdi (turbo direct injection) Diesel engines combined with a flywheel powered motor generator unit. 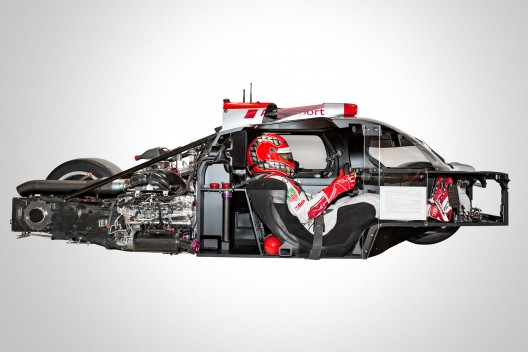 Redefining cramped quarters in the Audi R18.  See below for electrical drive next to driver’s feet

Joest Racing, which ran the winning Audi’s explains, “Through the intelligent combination of a conventionally powered rear axle with an electrically powered front axle the Audi R18 is transformed into an e-tron quattro – the first Audi racecar which is not powered exclusively by a combustion engine. The system located in the front of the car comprises of two driveshafts and a Motor Generator Unit (MGU) together with planetary gearbox, which retrieves its own energy from the electric flywheel accumulator mounted alongside the driver in the cockpit.

The energy is recuperated and stored during braking. In the process, the front wheels drive the Motor Generator Unit. This accelerates electrically a carbon-fiber flywheel, which runs in a high vacuum. Once the corner is taken and the driver accelerates again, the system delivers the energy to the front axle – but as the regulations state, however, only above a speed of 120 km/h. ‘As a result, the advantage that we could theoretically have with the electric quattro drive is obviously severely limited,’ explains Head of Audi Motorsport Dr. Wolfgang Ullrich. The regulations also limit the maximum amount of energy that can be transmitted to the front wheels between two braking phases.” 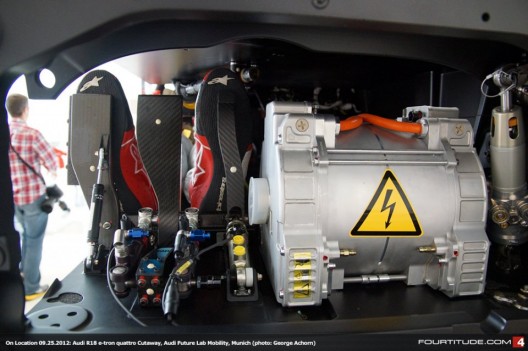 These limitations were not so limiting as to prevent an Audi win, though.

Toyota, a third-place finisher, was disappointed following several years of better luck.  Their hybrid racing web site, explains, “The #7 TS040 HYBRID of Alex Wurz, Stéphane Sarrazin and Kazuki Nakajima started from pole position and held a 90-second lead with less than half the race remaining.

“However, an unexpected electrical problem related to the wiring loom forced Kazuki to stop the car at Arnage corner. With no chance of returning to the pits, the #7 officially retired after 13 hours and 53 minutes.

“The #8 TS040 HYBRID also had high expectations of fighting for victory but realistic hope was ended within 90 minutes. In a sudden downpour, and on slick tyres, Nicolas was involved in a multi-car accident on the Mulsanne Straight.”  The team was never able to recover from that and several other incidents.

Despite its big disappointment in the race, Toyota plans to incorporate its regenerative technology in the next generation Prius, promoting the use of race-proven ideas in improved “civilian” vehicles.

“Toyota Motor Sport team principal, Yoshiaki Kinoshita, told Drive the Japanese car maker is using the Le Mans race to look at ways of incorporating supercapacitors into production cars in the future, suggesting the next-generation Prius could introduce an integrated hybrid storage system with a combination of both a supercapacitor and battery pack.”

Car and Driver gave further insight into the complex hybrid system employed by Toyota.  “Toyota also beefed up the hybrid system by adding a second electric motor-generator unit (MGU) built by Aisin to the front axle, which augments the carryover rear-axle Denso MGU. 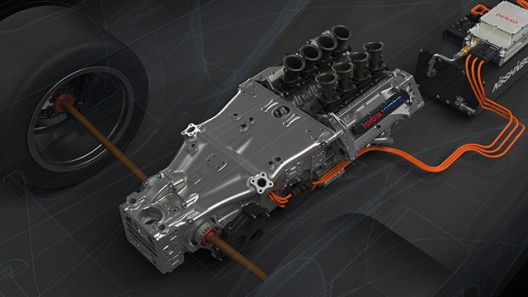 “Electric energy captured during braking is stored in a Nisshinbo super-capacitor, and can zap the electric motors to produce a combined (and hearty) 475 horsepower, very nearly matching the output of the 513-hp, mid-mounted, naturally aspirated 3.7-liter V-8. (Yep, that’s a total combined output of 988 horsepower!) This year’s WEC rules include a classification hierarchy for MGU energy usage, in 2-megajoule increments from 0–8 megajoules, and the Toyota falls under the 6-megajoule hybrid energy allotment. (While the rules are somewhat complex, essentially the higher a team’s megajoule allotment, the fewer megajoules of fuel energy it can use per lap.) Altogether, the TS040 racer is a whopping 25 percent more efficient than last year’s TS030, Toyota claims.” 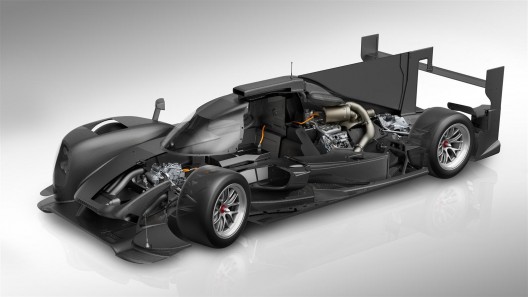 Cutaway of Porsche 919, which they claim is the most complex Porsche ever, with gas-powered V-4 in rear, motor generator unit in front

Most disappointed of all, Porsche finished in 11th and 13th places, 31 and 33 laps behind the lead Audi.  This followed the 919’s lead as late as the 20th hour.  Their 500-horsepower V-4 engines and 250-horsepower electrical generator unit could hold their own with the Audis and Toyotas, but racing is often as much about luck as it is driving skill and technology.

Getting 500 horsepower from two liters (the Nissan pulls 400 from 1.5 liters) is astonishing – as is making these engines last 24 hours at full throttle most of the way.

Considering the awesome power outputs from these machines and their ability to withstand 24 hours of extreme punishment, the reliability of mechanical and electrical systems on these vehicles – along with the mandated 30-percent improvement in fuel economy over last year – shows major improvements we might be able to make in future cars and airplanes.