Lockheed Martin and LaserMotive recently managed to keep a drone, the Stalker Unmanned Aerial System (UAS), flying for 48 hours on a laser-guided recharging system.  Its on-board batteries can maintain flight for two hours, so the demonstration improves endurance by 2,400 percent.

Your editor admits to possibly over-healthy skepticism regarding transmittal of power to aircraft, remembering early NASA demonstrations that were noisy and more lightning-like than focused.  LaserMotive’s technology seems to overcome these objections.

Stalker is described by Lockheed-Martin as “a small, silent UAS used by Special Operations Forces since 2006 to perform intelligence, surveillance and reconnaissance missions.”  The miniature plane  weighs a little over six kilograms (13.2 pounds) and has a wing span of three meters (9.84 feet).  As shown in the video, it can be hand-launched by a single soldier or enforcement office and fly for up  to two hours at up to 4600 meters above the ground.  In this video, narrated by that guy who’s heard in every movie preview, it’s shown performing a possible drug interdiction or contraband mission.

Unlike the video, the Stalker flew indoors “in a wind tunnel,” with the LaserMotive system wirelessly transferring energy to the aircraft.  At the end of the test, the aircraft had more energy stored than it did at the beginning of the test.  According to Tom Nugent, LaserMotive’s president, “This test is one of the final steps in bringing laser-powered flight to the field.  By enabling in-flight recharging, this system will ultimately extend capabilities, improve endurance and enable new missions for electric aircraft. The next step in proving the reality of this technology is to demonstrate it outdoors in an extended flight of the Stalker.”

Tom Koonce, Lockheed Martin Skunk Works® Stalker program manager, added, “We’re pleased with the results of this test. Laser power holds real promise in extending the capabilities of Stalker. A ground-to-air recharging system like this allows us to provide practically unlimited flight endurance to extend and expand the mission profiles that the Stalker vehicle can fulfill.”

The Stalker had earlier been outfitted with a fuel cell that allowed eight hour flights to quadruple its normal flight time, combined with “a conventional lithium polymer battery to handle peak power requirements, [using] its high energy density hydrocarbon fuel to handle energy storage rather than a relatively low energy density battery.” 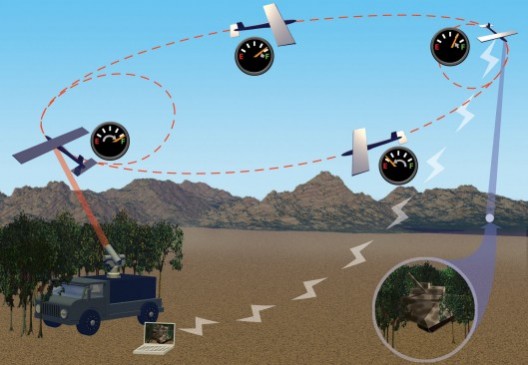 How these indoor tests will translate to a real-world environment will be interesting, since the fuel-cell powered version encountered sustained winds of 28 mph and gusts of 46 mph.  Tracking and targeting the small receiver on a craft being buffeted in the air will notch the level of difficulty up significantly.

With on-board batteries or fuel cells and intermittent charging passes, an aircraft could pass over strategically-placed recharging stations along a line of flight.  If  full-size aircraft are able to be sent on long-range missions with such power,  It would mark a significant change in direction for electric aircraft.