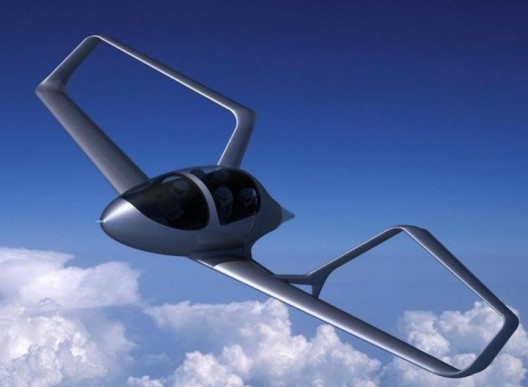 John McGinnis, designer and promoter of the Synergy aircraft, had a brief twinge of regret when Kickstarter, the crowd source funding site, turned down his project for inclusion in their site.  Luckily, the gloom was dispelled when friends and supporters prompted Kickstarter to change their mind.  A great deal of this was brought about by the eloquent efforts of Patrick Panzera of Contact Magazine, Howard Handelman, a friend and supporter of John’s, and Brian D. Wendt, Aeropunk.com blogger.

“Since its unveiling last year, John McGinnis’ award-winning1 Synergy aircraft project has garnered a lot of critical attention for its advanced aerodynamics, but its sexy looks and prototype flyby videos certainly don’t hurt the pitch: major fuel savings and a modern passenger experience.

“Looking something like a futuristic cross between a sailplane and a fighter jet, the boldly different five-seat aircraft promises a quieter, more comfortable ride, along with greater performance and efficiency. Curb appeal aside, there’s an old quip among aviators; their response to the technical question of what really makes an airplane fly: ‘money.’

“A Kickstarter.com fan himself, McGinnis prepared a project submission and was met with a terse “not the best fit for Kickstarter, as it does not fit our creative arts focus.” In response, several followers formed Friends of Synergy, a direct-to-project funding drive modeled on the Kickstarter rewards, which quickly raised over $5000. Others began typing emails and blog entries.

“’We’re not sure what happened,’ McGinnis said, ‘but just after we gave up hope, we got an email from Kickstarter’s Callan Lamb: ‘I wanted to reach out and let you know that we’ve reconsidered your project submission.’”

“McGinnis said, ‘We’re ecstatic that Kickstarter will now help. Though this Synergy Kickstarter project’s initial goal of $65,000 is just ‘life support’ for the engine and landing gear installation phase of a much larger completion effort, we’re happy to receive this opportunity at this crucial time.’ Many timely projects receive an outpouring of enthusiasm from backers, which is part of the appeal of the crowdfunding model, McGinnis said.

“The Synergy Project bears a resemblance to other breakthrough efforts of modern memory, like the Gossamer Condor and Gossamer Albatross projects of Dr. Paul MacCready in the 70s, and the Rutan Voyager project in the 80’s, which were accomplished almost entirely through volunteer efforts.

“A credentialed lineup of test pilots, engineers and scientists, including thousands who follow the kit aircraft movement, are likewise following the project closely, many lending their time and expertise to the project at no charge. Several have traveled to Montana to help out personally, as the regular updates that appear on the project Facebook page have shown.

“McGinnis and his growing team are much more confident in the aeronautical work than in the mood swings of the economy. Fickle or not, the project is counting on a major response from their resurrected Kickstarter campaign. ‘I think this could be huge,’ McGinnis says. ‘Ordinary people get it.’

Follow the fortunes of the Synergy team on the project’s home page,  and receive regular updates on Synergy’s Facebook page.

John has additional details of the “unusual premise behind ‘open thermodynamics’ and the double box tail configuration, including the engineering and testing of the concepts to date.