Klaus Burkhard is a sailplane pilot exploiting the air currents over his native Germany in 120-kilogram (264-pound) ultralight machines (most of which weigh far less) – which may become a part of an increasingly electrified sport.  He wrote this to your editor in response to recent coverage of the electric version of a record-setting ultralight sailplane.

“I just came over your interesting website, reading your blog about the Swiss Archaeopteryx, where you described the Archaeopteryx as a high-end hang-glider, publishing a picture from an older version in ‘open’ variety. 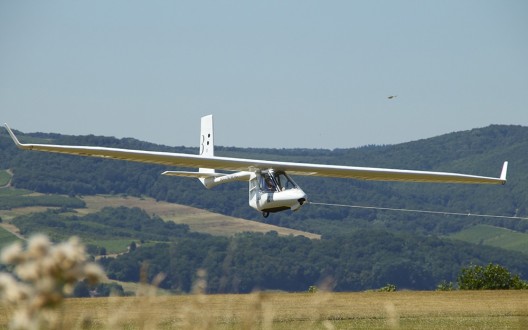 Archaeopteryx on tow. Airplane may be foot or bungee launched, winch or aircraft towed

“Of course the Archaeopteryx is classified as hang-glider in the OLC (on-line competition)  and also as Class-2 hang-glider within FAI-regulations, as it´s foot-launchable and foot-landable as well, both basic requirements for FAI Class-2.

“Since the Archaeopteryx is -contrary to normal hang-gliders- three-axis aerodynamically controlled by elevator, rudder and flaperons, it´s an Ultralight-Glider of the best with fantastic flying-abilities, outstanding flying-performance and uncritical in any situation. L/D is 29 in race-covering. 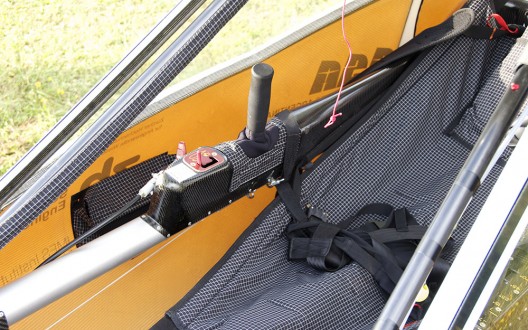 The business office with sunlight glowing through the deceptively thin skin

“In 2012 I had the opportunity to test-fly the Archaeopteryx in Switzerland. Since I jumped in to the Ultralight-Soaring-Scene over here in Germany, after being 40 years glider-pilot, when I first found the Archaeopteryx in the internet, I was very sceptical about this funny flying-machine, one does not embark like a normal glider, but pulling over your head and slipping in to it from underneath.

“[For the last] four years, I [have done] 1-1/2 hour presentations and lectures about Ultralight-Soaring [for] flight-instructors during recurrent training as well as at AERO-Friedrichshafen, Deutscher Segelfliegertag (similar to the SSA-convention) an overall look at the Ultralight-Soaring scene right from the beginning in 1974 until now.

“In my first presentations I remember very well, I commented on the Archaeopteryx with the words: ‘Slipping into it from underneath and running down the hill with some hope, wings producing lift before I stumble over my legs and get stuck nose-down in a juicy green cow-pie, that´s just nothing for me in my age of 67 – and by the way, for $100.000 one can get a real glider’.

“Meantime, after I saw the plane in real and have been flying it, I know the Archaeopteryx is a real glider and worth any cent it costs. [It is ] built in an outstanding perfection I´ve never seen before, not even in gliders of well-known German manufacturers.

“I hope I have the opportunity to test-fly the Elec´teryx this summer, I´m excited to do so of course!!!

Klaus sent the pictures seen here in 2012 in Bad Sobernheim/Germany.

He is a gifted aviation reporter, witnessed by this letter, his great web site, an excellent overview of ultralight sailplanes in the magazine,  Soaring New Zealand and a flight report on his first experiences with the Arch. 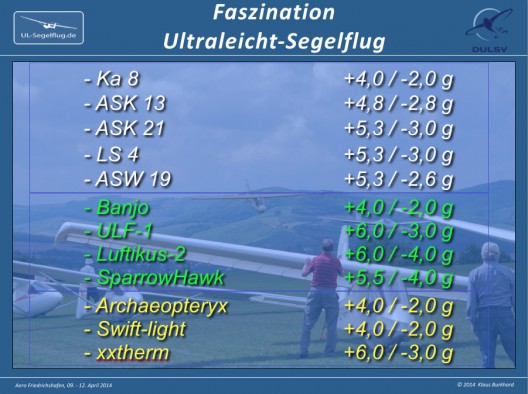 Ultralight sailplane load factors – tougher than they look in slide 1

He explains a problem he faces in convincing “old-fashioned” glider pilots to try the “new-fashioned” ultralights that these lean craft are not fragile and will not break into parts in mid-air.

“For my last presentation at the AERO-Friedrichshafen, I therefore included a new slide into my presentation, showing the load-factors of different “ordinary” gliders compared to those of some Ultralight-Gliders of our 120 kg-Class and those foot-launchables weighing only half of the 120kg-class gliders. 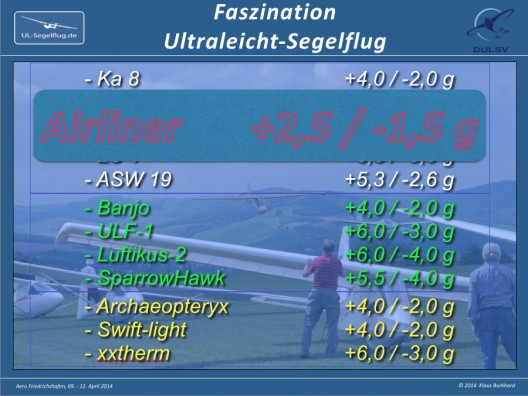 This [leaves] them wondering and most of them starting to think about it and seeing things with a different view, especially when I then show the common load-factor of airliners.  Sure, those Ultralight-Gliders have to be treated differently to what they are used to in their clubs.”

These types of sailplanes with small electric motors and compact battery packs could open up a new realm of sport flying, one much less expensive than standard sailplanes and their towplanes can offer, but every bit as rewarding.