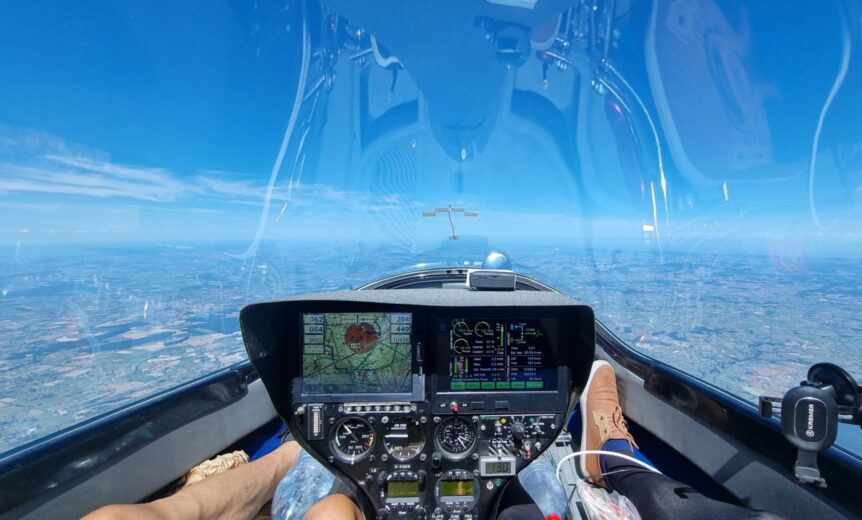 Klaus Ohlmann and Jonas Lay in the one-and-only eGenius just completed a 2,003 kilometer (1,244 mile) trip from Germany to the Atlantic Ocean on the southern tip of France and return.  The numbers are spectacular.  The flight averaged 190.36 kilometers per hour (118.28 mph) and its hybrid power system consumed a mere 81 liters of fuel.  That works out to 24.72 kilometers per liter or 58.15 mpg.  Even a Prius at that speed would guzzle gasoline. 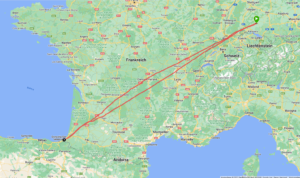 Route from Mengen to Biarittz and return. Not bad for a day’s flying.

eGenius was to have originally been HydroGenius, flying on gaseous hydrogen.  Starting design in 2006 and as presented at the 2009 Electric Aircraft Symposium, HydroGenius was designed by Rudolf Voit-Nitschman, Len Schumann, and Steffen Geinitz of the IFB, Institute of Aircraft Design at the University of Stuttgart.  Because Mercedes-Benz did not have their fuel cell available, the designers turned to pure battery power and the airplane became eGenius. 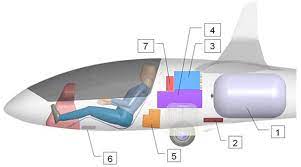 The craft won second place in the NASA Green Flight Challenge sponsored by Google in 2011.  It flew over 200 miles on a closed course at 107.3 mph on the electrical equivalent of 375.7 passenger mpg.  Klaus was copilot with team leader Eric Raymond.  The airplane won the Lindbergh Prize at the event as the quietest electric aircraft.

Since that event, Klaus has set many records, and the craft has undergone various approaches to hybridization, with the latest version powering this week’s record flight.  The current version incorporates the engine/generator into the fuselage, probably explaining the air intake above and aft of the cockpit.

Dieter Hornig, writing on Facebook, thanks Professor Andreas Strohmayer of the IFB for the use of the airplane to go after the records.  He also thanks Robert Heggemann, Chairman of the Supervisory Board of Heggemann AG for the custom-built 60-liter auxiliary fuel tank (with an additional 60-liter capacity), something that helped double eGenius’ range from its previous record.  Several employees worked weekends to help pull things together for the record attempt.

The route, from Mengen Airport in Southern Germany to Biarritz (St. Jean de Luz) and back gained a record for distance over a closed course – 2004.7 kilometers (1,246 miles).

Setting records for flight “over a recognized course and back” at 191.58 km/hr. (119 mph and the average speed for the flight) and the same for a closed course, the team ended their day with a total of five world records.

Add that to the records Klaus has set in IFB’s solar-powered Icare’, Stemme’s, eGenius, and the Lange Antares and there are now over 70 world records to his credit.

In a few months, he’s headed to the Himalayas to once again soar above Mt. Everest, a challenge for man and machine.  Klaus and eGenius will doubtless go on setting records in record numbers.  We wish him and all who fly with him well.