KillaJoule is the world’s fastest electric motorcycle with a top speed of 241 mph (388 km/h) so far.  About 80 percent of this sleek bullet is the design and work product of co-owner and driver Eva Håkansson, who has graced the stage at two Electric Aircraft Symposiums, the last appearance with her husband and crew chief, Bill Dube’.

Their web site explains, “KillaJoule is really eco-activism in disguise. The only purpose of this 19 foot, 400 horsepower, sleek, sexy motorcycle is to show that eco-friendly doesn’t mean slow and boring.” 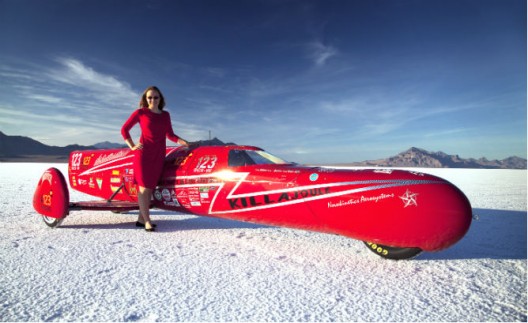 Over the Labor Day weekend, Eva lowered her petite frame (she’s about five feet tall) into the cockpit of her speedy sidecar to break her old world record and set a new mark 25 miles per hour faster than anyone else has gone before in or on a motorcycle.  The sidecar definition comes from the outrigger wheel and platform that thankfully, doesn’t require a rider for these speed attempts.

The bike (trike?) weighs a mere 1,540 pounds with Eva on board, giving a weight to power ratio of 3.85 pounds per horsepower at the 400-hp rating, or only 3.08 pounds per horsepower if Eva opened the throttle all the way (probably good only for very short bursts of power).  Compare that to an Indianapolis race car, which weighs between 1,545 and 1,575 pounds depending on tires and has an internal-combustion engine producing an “estimated 550-700 horsepower depending on variable turbo boost used at [the] track.”  Both are positively svelte compared to a Lamborghini Aventador with a dry weight of 3,472 pounds and power output of 700 horsepower (4.96 pounds per horsepower). 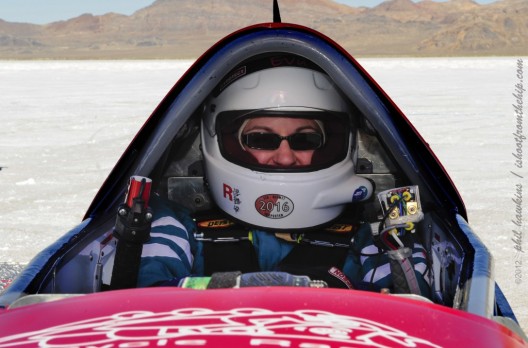 It’s obvious that the bike was literally designed around Eva.  Photo: Phil Hawkins

Eva wires her own battery packs, a meticulous and somewhat anxiety-provoking thing to watch, and has crafted a 400 Volt, 10 kilowatt-hour, 500 horsepower package for KillaJoule.  The A123 Systems lithium nano-phosphate cells power an EVO Electric AFM-240 motor that is capable of 500 horsepower at full tilt. Two Rinehart Motion Systems PM100 controllers that can manage 400 horsepower between them keep it all working in harmony.

The vehicle is only 21 inches wide and about 38 inches high.  The video, because of the wide angle lens used, fails to allow full comprehension of the claustrophobic of the driving position.  The sidecar gives a track width of 45 inches, not enough to claim wide track status.  Nevertheless, Eva manages with notable finesse, keeping the red machine threading the needle between marker poles with precision.

Sven Håkansson, her father and senior adviser to the team, designed the “Springer ”style front suspension and “classic stereo” rear suspension.  It seems to give a smooth ride, even when the fore and aft disk brakes and twin Kevlar ribbon braking parachutes bring things to a quickly decelerated halt. 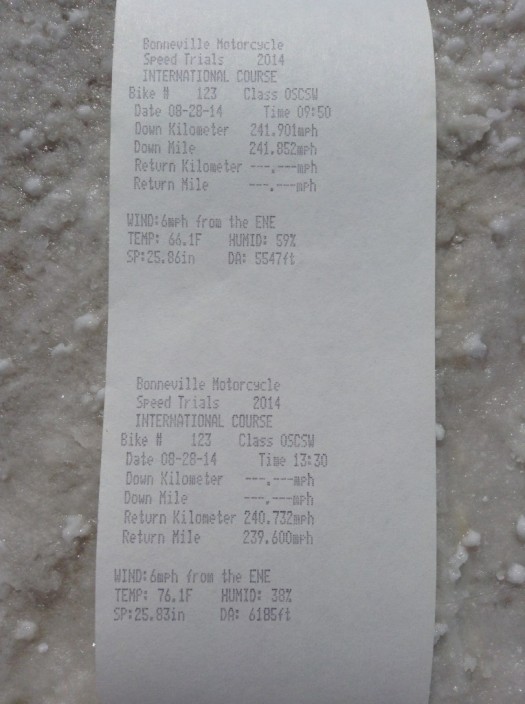 KillaJoule’s registered top speed is “currently 241.901 mph (as of August 2014).”  Congratulations to Eva, Bill and the entire racing team, including Mike Stockert, Alicia Kelly and Kent Singleton.  Eva Håkansson will be more inspiring than ever to the classrooms of young girls she encourages to enter Science, Technology, Engineering and Math (STEM) fields of study.  Nobody nods off during her sessions.