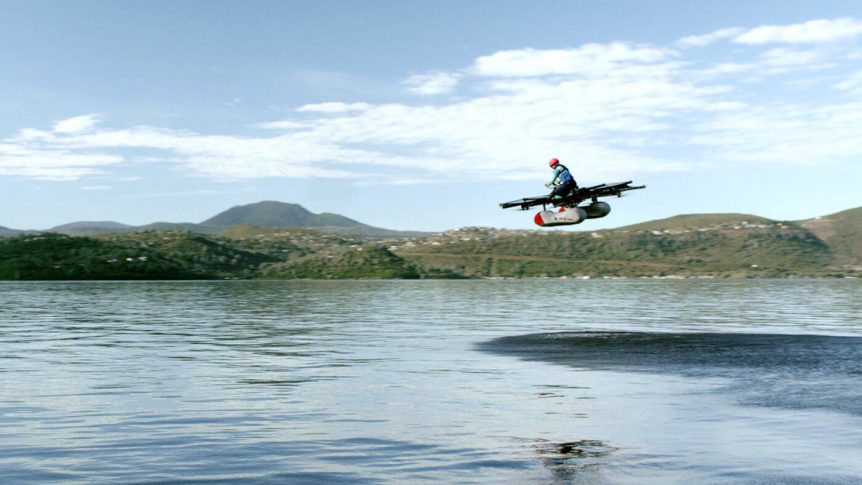 What’s the definition of a “flying car?”  Does it need four wheels and quick-deploying wings to meet the definition?  Engineers at Kitty Hawk, a Larry Page-funded company, showed some major sales points for what looks to be an easy-to-fly, somewhat whimsical electrically-driven octorotor.  The Verge reports that, “Kitty Hawk promises people will be able to learn to fly the Flyer “in minutes.” A consumer version will be available by the end of this year, the company says.”

The New York Times was a bit whimsical in describing the machine.  “Kitty Hawk’s flying car, if you insisted on calling it a “car,” looked like something Luke Skywalker would have built out of spare parts. It was an open-seated, 220-pound contraption with room for one person, powered by eight battery-powered propellers that howled as loudly as a speedboat.”

It’s also very much a ground effects machine, built to be used over water, but apparently without the necessary poop on the poop deck to summit distant hills.  The noise would keep it from flying over neighborhoods without angry residents waving offensive hand signs and possibly weapons.  Indeed, the company says it’s designed to fly over “uncongested areas” and without the need for a pilot’s license, the craft’s light weight making it an “ultralight,” at least by weight.

A noisy machine will blend in well with other water-borne recreational vehicles, and this is offered as a first version of what seems to be a coming series of “flying cars.”  Due to hit the market, and probably Nieman Marcus catalogs later this year, the Flyer doesn’t have an official price as yet.  You can, however, put $100 down today to get a $2,000 discount on the final price.

What this, and other similarly configured devices show, is that controllability doesn’t seem to be an issue.  Even with the pilot above the eight rotors, the machine doesn’t seem to tip over from extreme leaning or banking.  Microprocessors and clever software programs probably account for much of this.  It might be nice, though, to put some protective covering over the rotors, just to protect those souls that more irresponsible pilots might overfly.

It will be even more interesting to see what route this initial outing follows as Kitty Hawk’s offerings become more ambitious.