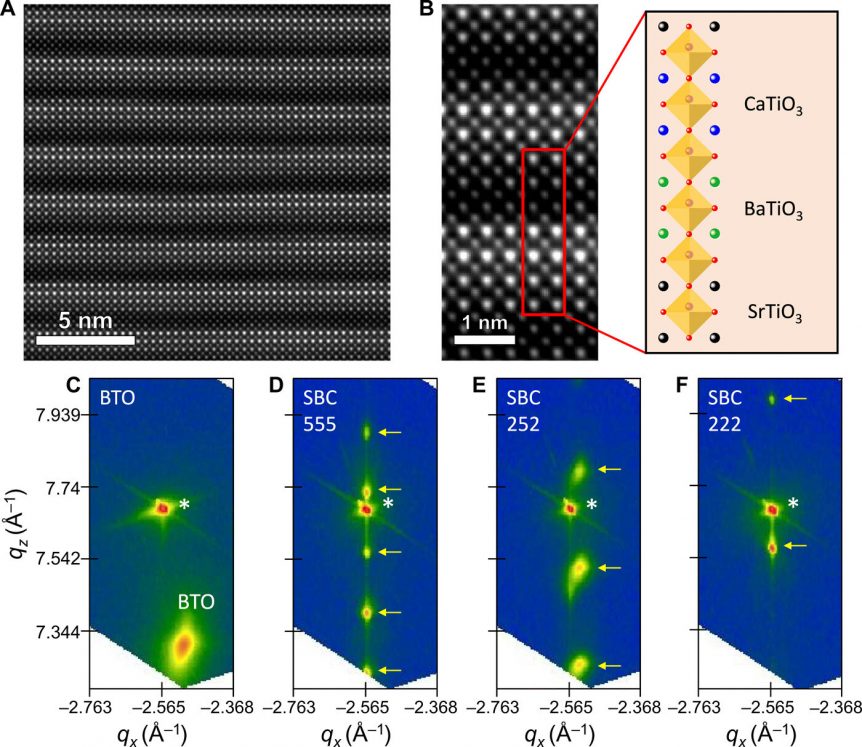 We hear a lot about 10X batteries, but 1000X solar cells?  Layering up may be stylish and even practical in the fashion world, and in solar cells may be a chance to unite otherwise dissimilar materials with otherwise limited light-to-electric conversion capabilities.   That strategy produced solar cells with 1000x that.  That’s what researchers at Martin Luther University Halle-Wittenberg (MLU) found when they created crystalline layers of layers of barium titanate (a mixed oxide of barium and titanium), strontium titanate and calcium titanate which they alternately placed on top of one another.

Researchers found high increases in responses from the layered oxides because of higher permittivity – electrons able to flow more freely.

The team’s paper, “Strongly enhanced and tunable photovoltaic effect in ferroelectric-paraelectric superlattices,” appears in the June 2 issue of the journal Science Advances.

Barium titanate (BaTiO3 or BTO) is a “common ferroelectric material” used to manufacture electronic components such as capacitors.  It is, “a popular choice for use in capacitors because of its high values of dielectric constant.”  Layering slivers of this material with thin slices of strontium titanate (STO) and calcium titanate (CTO) enabled the otherwise not very reactive BTO to produce 1,000 times its original energy. 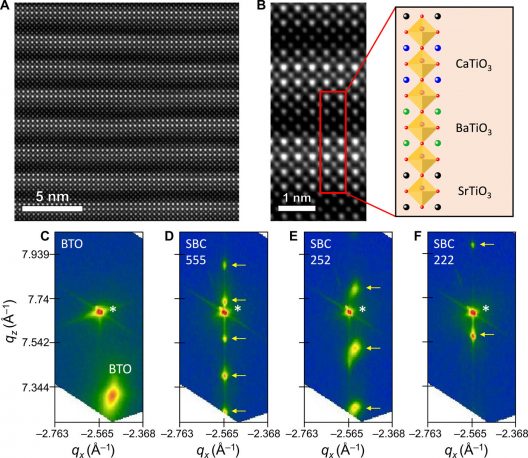 The University’s newsletter shares an inside source.  “Yeseul Yun, a PhD student at MLU and first author of the study, explains: ‘We embedded the barium titanate between strontium titanate and calcium titanate. This was achieved by vaporizing the crystals with a high-power laser and redepositing them on carrier substrates. This produced a material made of 500 layers that is about 200 nanometers (0.00000078-inches) thick.’”

That process in turn led to a multi-layered “solar cell” that is “ferroelectric.”  Physicist Dr Akash Bhatnagar from MLU’s Centre for Innovation Competence SiLi-nano explains, “Ferroelectric means that the material has spatially separated positive and negative charges.  The charge separation leads to an asymmetric structure that enables electricity to be generated from light.”

Ferroelectric materials, to be effective as solar collectors, must be alternative with paraelectric materials, that generate dielectric polarizations when an electric field is applied to the material and lose the polarizations when the electric field is removed.  This switching seems to have an effect on the overall ability of the sandwich to generate electricity. 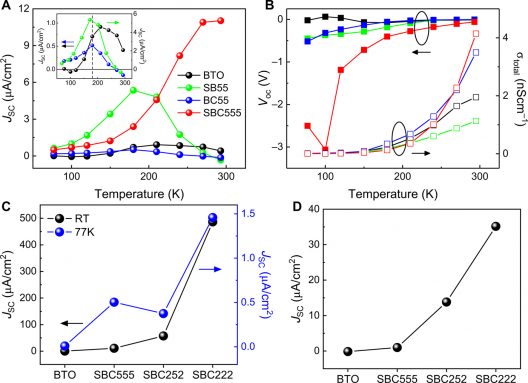 Solar Impulse flew on 17,248 photovoltaic solar cells, about 269.5 square meters (2,901 square feet) in area.  They could put out about 66 kilowatts at full power if the sun were directly overhead on a cloudless day.  For an airplane, that condition will rarely be true.

Eric and Irena Raymond’s Sunseeker Duo carries 1,510 solar cells, enough to power its 25 kilowatt (33.5 horsepower) motor and enable all-day soaring flight.  It started with the 25 square meters (269 square feet) wing area of the Icare’ 2 from which the wing was derived.  We’ve reported before that the area was reduced slightly to accommodate the more efficient solar cells available.  Both aircraft fly at bird-like speeds. 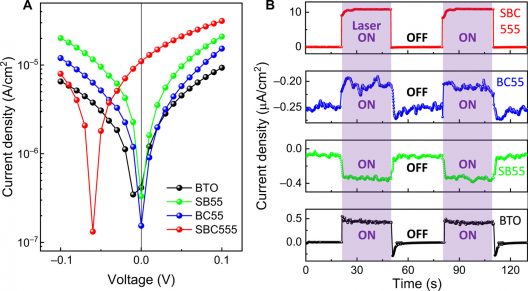 Enhancement of photovoltaic effect in tricolor superlattices.
(A) Current-voltage (IV) characteristics measured with 3.06 eV at room temperature. (B) Current-time response acquired with the illumination ON and OFF.

In either instance, solar cells capable of providing even 10 times the power feasible with today’s best would have given Solar Impulse 660 kilowatts to fly faster on a smaller wing – making ocean crossings less of an ordeal.  Rather than flying essentially a sailplane, the Raymonds might make longer, quicker trips in something like a short-wing Pipistrel.  1000x in either case would provide unprecedented power.

Either redesign would require totally different wing, span, and power loadings and would be very different airplanes.  Totally new designs could reduce aircraft size and weight while stretching performance.

Will the cost of these much-improved solar cells be expensive?  Two friends who inquired about flexible solar cells for their electric ultralights a few years ago were disappointed to find the cells cost as much as their airplanes.  We can hope the good people at Halle find a way to make one of those lucrative university-industry partnerships possible in the near future.  Much loke Martin Luther nailing his 95 theses to the Wittenberg door, this would be a true game changer.