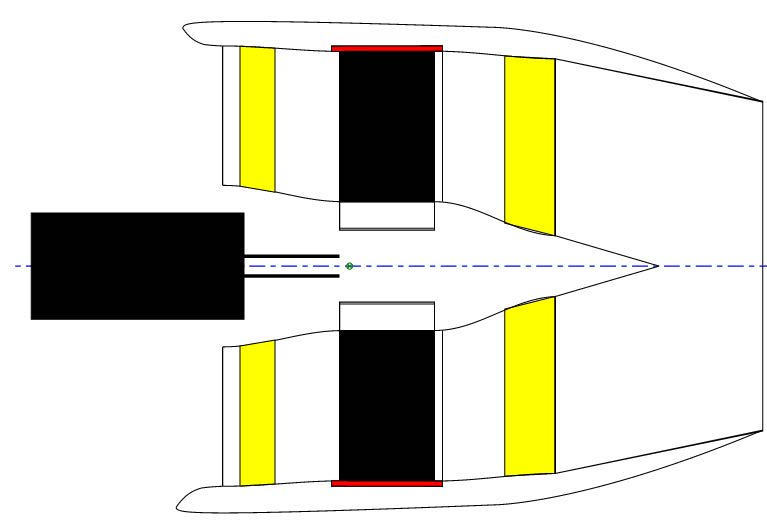 Hybrid and electric cars sell because they lower operating costs for the owner.  Designers and manufacturers sort out ways to increase efficiency, including streamlining, using low-rolling-resistance tires, and making structures lighter.  An added technology, boundary layer ingestion (BLI) may add to aircraft efficiency.

NASA and industry leaders are working on equivalent solutions for aircraft, and airplanes will end up as different from today’s designs as Toyota Priuses and BMW i3s are from Ford Falcons or Chevrolet Corvettes.  NASA proclaims, “An aviation renaissance, one focused on energy efficiency and economic impact, is on the horizon, and it’s changing how engineers look at aircraft power and design.” 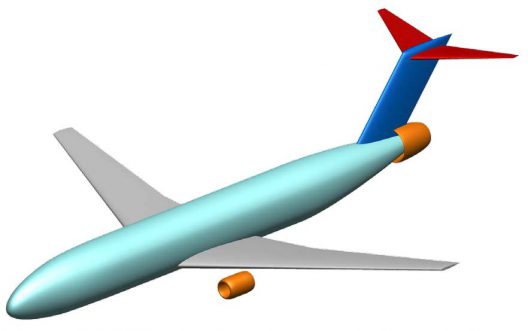 Jim Heidmann, a manager of NASA’s Advanced Air Transport Technology Project (AATT), says, “I feel we are at a tipping point in commercial aviation.  We are exploring and developing game-changing technologies and concepts for aircraft and propulsion systems that can dramatically improve efficiency and reduce environmental impact and accelerate the introduction of new aircraft.”

Think of incredibly efficient aircraft such as Eric Raymond’s Sunseeker Duo, or Stuttgart University’s e-Genius.  Both fly on low power: (22 kilowatts – 29.4 horsepower) transport Eric and wife Irena around Italy and Switzerland), and both transcend the heights with marvelously little noise.

STARC – Swallowing Its Own Boundary Layer

NASA’s experimental outings include distributed propulsion and low-boom” supersonic aircraft, but we’ll first look at a twin-jet airplane with an electric fan in its tail.  The STARC-ABL (single-aisle turboelectric aircraft with an aft [at the rear of the aircraft] boundary-layer propulsor) looks like a Boeing 737, but with smaller engines under the wings and a noticeable cylindrical bulge under its T-tail empennage.

The wing-mounted engines produce 80-percent of the thrust required for takeoff and 55 percent at cruise.  The tail-mounted boundary-layer ingestion turbofan provides the remaining thrust.  According to researchers, this combination should reduce fuel consumption by around 10 percent.

NASA’s presentation gives a high level of detail about the technology involved.

Smoothing the Way for a Tail Propulsor

Engines hanging under the wings, as they do on most Boeing and Airbus products, present a neat aerodynamic advantage, skimming through undisturbed air.  A turbine at the rear of a fuselage, as on a 727 or DC-10, has to deal with turbulence coming off the fuselage.  Wind-tunnel tests at NASA Glenn are showing how to lower drag with this configuration. 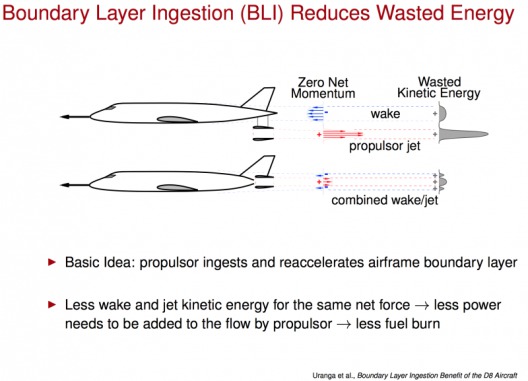 Something counter-intuitive takes place at this point.  NASA explains, “With the engines in this location, the slower, boundary layer air enters the engine – or is ingested, as in boundary layer ingestion – and is then accelerated with the rest of the air passing through the engine and exhausted out the back.

“It doesn’t matter if the incoming boundary layer air winds up being compressed, mixed with fuel and burned to become part of the hot jet exhaust, or if the air flow bypasses around the engine core, through the fans and out the back.”

While this doesn’t create more (or less) thrust, it does reduce drag, allowing the under-wing engines to produce less power and use less fuel.

The 24 megawatt system is not the largest such test bed, but adequate for the needs of the single-aisle tests.

Robert Jankovsky, NASA Engineering and Safety Center (NESC) Chief Engineer, sees future benefits and expanded horizons for this program.  “As we move forward, we’d like to further develop the powertrains for these and any other concepts that may prove viable by building and testing them at NEAT and other NASA facilities.  We’ll identify key performance parameters for components such as motors, generators and power electronics, and any wind tunnel, altitude and other ground tests and flight demonstrations that are appropriate.”

Doubling Down along Similar Lines

Aurora Flight Science’s “Double Bubble” D8 has been tested in an MIT wind tunnel, and uses boundary layer air from the top of its double-wide fuselage to feed its engines.  Boeing recently acquired Aurora, so it will be interesting to see how they meld the technologies.  The video highlights Aurora’s contribution, but can be seen to be a close match to NASA and Boeing’s work on a single-aisle solution.

Aurora explains, “The efficiency gains of the D8 are the result of a tightly integrated design approach. Increased lift generated by the wide “double-bubble” fuselage means smaller wings are needed to carry the vehicle’s weight, resulting in less fuel to fly a given mission. When the engines are integrated into the back of the fuselage, thrust requirements are further reduced due to efficiencies from Boundary Layer Ingestion (BLI). This means that smaller engines can be used, which reduces weight and fuel even further. This cycle of repeated optimization is what gives the D8 such groundbreaking efficiency.”