Researchers at the Swiss Federal Laboratories for Materials Testing and Research (EMPA) have published a study in the current edition of the journal, Environmental Science & Technology, “Contribution of Li-Ion Batteries to the Environmental Impact of Electric Vehicles.”  The paper is available in its entirety online.

It’s abstract notes that, “Little is known about the environmental impacts of the production, use and disposal of the lithium ion (Li-ion) battery. This makes it difficult to compare the environmental impacts of BEVs with those of internal combustion engine cars (ICEVs). Consequently, a detailed lifecycle inventory of a Li-ion battery and a rough LCA (Life Cycle Analysis) of BEV (Battery Electric Vehicle) based mobility were compiled.”  This blog has an earlier introduction to the concept of Life Cycle Analysis which may prove helpful.

In their analysis, the team of Dominic A. Notter, Marcel Gauch, Rolf Widmer, Patrick Wäger, Anna Stamp, Rainer Zah and Hans-Jörg Althaus concludes the environmental costs of lithium batteries is small as part of the overall impact of electric cars, with the operational phase being the largest contributor to environmental costs.  The team used a Volkswagen Golf-equivalent vehicle for their calculations, factoring in a 240,000 kilometer (148,800 mile) lifespan for the car.  This use, in their assessment, would require one battery exchange during the car’s total use.

In the following illustration, the gray-shaded boxes are of the most interest in terms of battery assessment.  “Glider,” in the chart, represents that part of the BEV that is not part of the power plant or its components (chassis, car body parts, wheels, interiors, safety devices, acclimatization devices).   The relative effect of this part of the car’s production and operation would be similar for either an electric or internal-combustion engine powered vehicle. 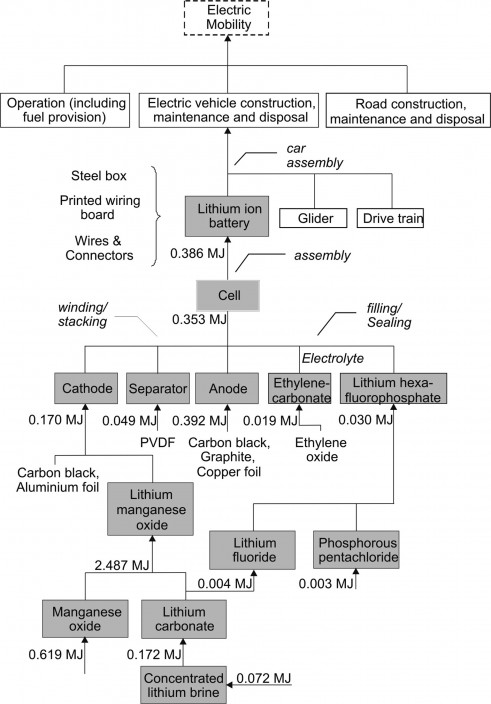 Notter and his team used the Swiss standards group Ecoinvent Centre’s life cycle inventory metrics for their assessment and focused on four major concerns.  These include a Global Warming Potential (GWP), or the effect such vehicles would have on climate change over a 100-year span; the Cumulative Energy Demand (CED) imposed by the vehicle; Abiotic Depletion Potential (ADP) – the removal of raw materials from the earth’s reserves to build the car; and EI99 H/A, a weighted measure of the total effect that manufacturing and operating the BEV has on human and environmental health.

Considering all other factors (such as road construction and maintenance, other resources used in building and maintaining auto-related infrastructure) equal, a gas or Diesel-powered equivalent car uses more resources over its lifetime and has a larger impact on environmental and human health.  Note that the study’s comparisons are with European vehicles; the VW equivalent to the BEV averages a fuel use of 5.2 liters per hundred kilometers (slightly over 45 miles per gallon).  The same comparison made with typical American cars and pickups would be more onerous.

One other element of interest is the mix of coal-fired, nuclear, and hydroelectric plants used in recharging the car’s batteries.  A different combination of hydro, wind power, and solar panels would change operating costs and environmental effects tremendously.

The chart below indicates the LCA for the battery itself, which as noted above, is a relatively small part of the effect that the BEV has on the planet and its people.  Researchers used a lithium-ion manganese battery (LiMn2O4), suggesting that this would be a direction for much future development of new cells.  Changes in the composition of the battery could have a major effect on its environmental costs, of course.

In a related Associated Press article, something probably understood by the average car buyer might now get a letter grade.  The Environmental Protection Agency proposes scoring automotive fuel economy on a scale of A to D.  Hybrids would almost invariably get an A+ while gas guzzlers such as a Mercedes-Benz Maybach 57 (10 mpg city, 16 highway) would be given a D+.  The Ferrari Scaglietti (9 city, 15 highway) would receive a D, the lowest grade (reflecting grade inflation even for automobiles).

According to the AP, “Environmental groups said they generally supported the plan, noting it would help consumers make meaningful comparisons between vehicles and choose vehicles that will help them save money at the gas pump. ‘You shouldn’t need a Ph.D. to buy a car. These proposed new labels will make it much easier for consumers to comparison shop,’ said Vickie Patton, Environmental Defense Fund’s general counsel.

“Environmentalists said the information on the stickers should reflect pollution from power plants that recharge electric vehicles. The proposal would only factor in greenhouse gas emissions from vehicle tailpipes.”