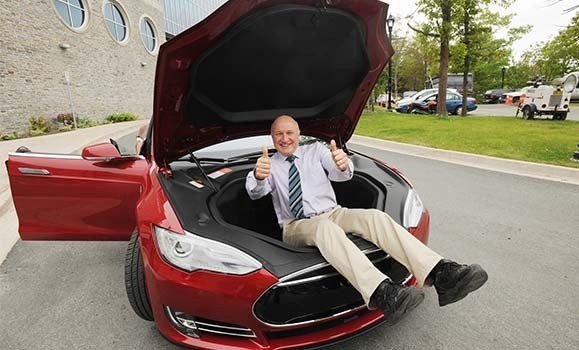 What if your new electric car came with a steel-clad warranty on its lifetime batteries?  Your editor’s father would have asked, “Whose lifetime?” but researchers at Dalhousie University suggest that might become a reality.

lIn a paper in the Journal of The Electrochemical Society, “Li[Ni0.5Mn0.3Co0.2]O2 as a Superior Alternative to LiFePO4 for Long-Lived Low Voltage Li-Ion Cells,” Jeff Dahn’s research team explains a different approach to battery longevity.  The chemistry is similar to that used in millions of cells, but lowers the amount of carbon to operate at 3.8 Volts rather than 4.2 Volts.  These lower output cells, “Have an energy density that exceeds that of the LFP cells and a cycle-life that greatly exceeds that of the LFP cells at 40 °C, 55 °C and 70 °C. Excellent lifetime at high temperature is demonstrated with electrolytes that contain lithium bis(fluorosulfonyl)imide (LiFSI) salt, well beyond those provided by conventional LiPF6 electrolytes.”

NMC532 refers to the ratios of nickel, manganese, and cobalt used in the electrode – 5:3:2.  The low level of cobalt is a benefit to cobalt miners, often children in conflict zones, enslaved to produce minerals for richer countries.  It also, by its absence, makes batteries less toxic and likely to pollute when disposed of.

This latest paper is an extension of research Dahn’s group has been performing for several years.  Papers from 2019 and 2015 show steady progress toward the latest documented outcome – not exactly an overnight sensation, but a creditable accomplishment.

Most of Dalhousie’s findings have been revealed in open access publication, making it possible to examine them in detail.  Some, regarding the 2019 paper, suggested the then million-mile duration of the pouch cells under test were “overkill.”  Others responded that semi trucks using such cells would be spared replacing their battery packs every few years.  Some thought the batteries would be suited to use in autonomous ride-hailing vehicles, which would scurry from one customer to another, racking up significant daily mileage.

Since 2015, Dalhousie has collaborated with Elon Musk’s Tesla to develop better, longer-lived batteries.  Even then, as GreenCarCongress.com reports, “Dahn references the development of the nickel-manganese-cobalt (NMC) positive electrode material as the most notable success of the partnership.”Currently, Dahn and associates are working on improving the performance of NMC 532.  Several vendors offer electrodes and material for producing electrodes of NMC532.

In a study of NMC positive electrode materials, Dahn’s tests discovered some important relationships between different levels of N, M, and C in battery makeup and their ability to withstand temperature variations.  “Thermal characteristics of Li-ion cells are one of the most significant aspects for safer battery design. Accelerating rate calorimetry (ARC) is used to characterize the reactions between charged electrodes and electrolytes at elevated temperatures. ARC tests are conducted under adiabatic conditions which allow the self-heating rate of tested samples to be strictly a function of the intrinsic heat generating reactions. 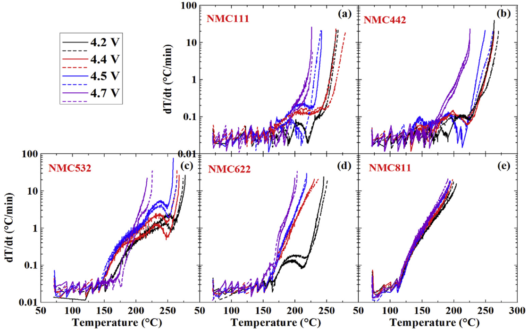 Different ratios of N, M, and C have great effects on temperature tolerance.  By lowering the amount of graphite in the negative electrode (anode), lower voltage outputs are produced, but much greater longevity

The computer tracks the self-heating rate of tested samples by heating up the jacket to maintain the same temperature between the sample and the jacket. Figure 1(a) shows the instrument used for ARC tests and 1(b) shows the typical self-heating rate vs. temperature curve including a simple illustration about the data. Figure 2 shows ARC results for reactions between some popular positive electrodes and traditional electrolyte (1M LiPF6 in EC/EMC 3/7).” 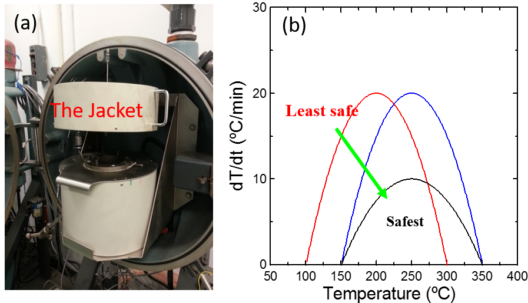 On the left, the jacket in which electrode samples are heated. On the right, the safest and least safe electrode compositions

As noted above, Dalhousie University and Tesla have worked together for the last seven years, a research agreement between the two signed in June, 2015.  The partnership has been renewed until at least 2026, and two new research associates brought on board, Chongyin Yang and Michael Metzger.  Yang has 12 years experience in “materials and devices for energy conversion and storage” and has led research on aqueous high energy lithium cells.  Dr. Metzger studied the lifetime and aging of batteries with BASF and BMW. 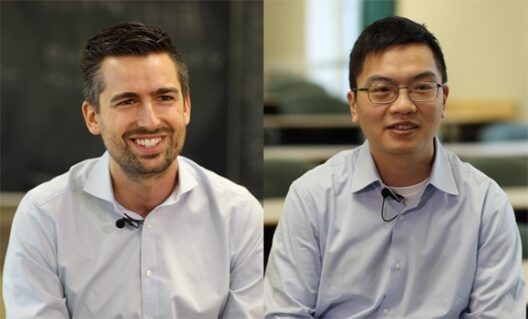 Dahn and his two assistant chairs should be able to continue work with Tesla, work which has already yielded six battery-related patents for Tesla and Dalhousie.  Dahn’s output has been prodigious, his teams authoring over 600 academic papers and Dahn has filed over 40 patents since 1988.  Tesla has begun production of NMC cells, but the relationship between what they have on the production line and the outcomes of Dalhousie research are unclear at this time.

With battery lifetimes beyond the expected life of any vehicles in which they might be used, one can imagine Tesla Powerwalls or other energy storage applications for cells which will last into the next century.  Such longevity will have effects on mining and extraction operations, as well as recycling.  In the meantime, Dahn’s and Dalhousie’s research on less expensive, longer lasting EV batteries will be welcome in the automotive and possibly aeronautical worlds.