The University of Maryland announced the successful 11.4 second flight of an American human-powered helicopter with a female pilot – now the National record holder and successor to the first female flight on such a machine – 17 years ago.

In 1994, your editor attended a human-powered aircraft symposium in Seattle at the Boeing Museum of Flight. Paul MacCready signed my copy of Gossamer Odyssey and I was official observer (for Chris Roper of the Royal Aeronautical Society) of the first female-powered helicopter flight.  Ward Griffiths, a svelte young thing from a local bike shop, cranked the very similar (to Gamera) thing into the air for 8.6 seconds – a first and a female record at that time.  A Japanese gentleman had done 15 seconds the day before and knocked the O. J. Simpson investigation off the front page of the Seattle Post-Intelligencer.  Flights took place in the Boeing 777 preparation hangar, while the big jet spooled up and taxied around outside.

This led to a screed on the event for Kitplanes, your editor’s first paying article. As an added measure of shameless self-promotion, your blog editor is now the ”Alternative Energies” contributing editor for the same magazine.

Readers exploring the technical detail on Gamera (a great .pdf on the University’s web site) will find that such helicopters use the “lost, or disappearing thread” technique to pull the light string wound around the pullies above each rotor onto the pedal crank turned by the pilot/engine.  This use of high-tension, lightweight thread on a one-way trip that lasts at most one minute was proposed by Paul MacCready, and  almost universally adopted by all HPH teams.

Helicopters are much harder to fly than conventional aircraft with only a human engine on board.  As Bryan Allen demonstrated in his 1979 flight across the English Channel, an athletic person can produce the necessary quarter-horsepower for a two-hour flight, not much worse than a tough stage of the Tour de France.  If the 100-pound airplane and the 125-pound pilot have a total drag of 15 pounds, that’s all the thrust needed to keep the assemblage airborne.  But a helicopter requires lifting the entire weight of craft and pilot vertically – a very large order.  University of Maryland life sciences graduate student Judy Wexler had to exert at least one horsepower for her flight in “extreme ground effect.” 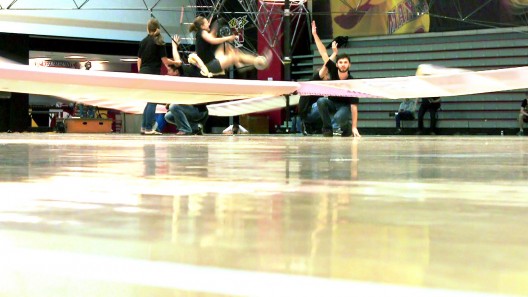 As Dr. Naito and his Nihon University students found in 1994, spreading the load across four large-diameter blades gives a light rotor loading and made flight in ground effect possible.  The configuration, as can be seen, eliminates “flying” in anything but a large enclosed area, and even a gymnasium doesn’t have quite enough area for the non-maneuverable and fragile creation.  His creation still holds the world record of over 19 seconds.

Human-powered helicopters have a fascinating but frustrating history, and the University of Michigan site on such efforts gives a glimpse of many approaches that have approached but failed to gain the Sikorsky prize, a $250,000 goad to overcome the many difficulties involved.

Chris Roper was designer of Jupiter, the most successful of the aircraft-like, labor-intensive HPAs of his day, and his web site has an enormous amount of material on the topic of human-powered aircraft.  His magnum opus is a compendium of low-speed aeronautics, light-weight building practices, and unlikely history.

It’s interesting that the Japanese team in Seattle named their helicopter after a Russian astronaut, and the American team named theirs after a Japanese monster turtle.  Film buffs will know that Gamera appeared  in a series of films by Daiei Motion Picture Company, a competitor for the Godzilla series produced by Toho Studios.  Each monster matured from being a metropolis-destroying pest to acting as a protector of the same cities (probably still under reconstruction) and beloved of children.