If you have a pre-teen roaming around the house, you more than likely know the shared delight of assembling the biggest possible thing you can make from Lego® blocks.  There must be something of that delight in the Center for Bits and Atoms at the Massachusetts Institute of Technology (MIT).

There, researchers have invented, “A new approach to assembling big structures — even airplanes and bridges — out of small interlocking composite components,” according to a story by David L. Chandler of the MIT News Office.

Neil Gershenfeld, director of the Center, and post-doctoral student Kenneth Cheung recently co-authored a paper published in the journal Science, in which they describe assembling strong lightweight structures with “cubocts,” lattice structures that are the lightest and strongest in existence, as stated in the Center’s publications. 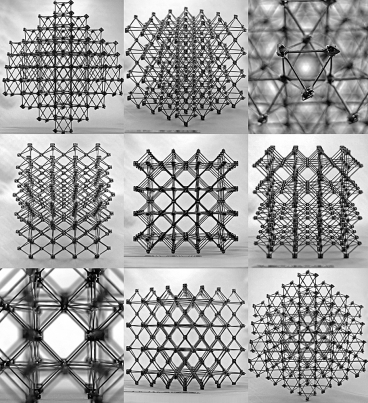 These materials also have “tunable and exotic responses to external and internal loads,” making them viable candidates for aircraft parts that could alter their shapes in response to aerodynamic or structural loads.

Chandler reports, “Gershenfeld likens the structure — which is made from tiny, identical, interlocking parts — to chainmail. The parts, based on a novel geometry that Cheung developed with Gershenfeld, form a structure that is 10 times stiffer for a given weight than existing ultralight materials. But this new structure can also be disassembled and reassembled easily — such as to repair damage, or to recycle the parts into a different configuration.”

Like Legos, the tiny bits can be mass produced (perhaps through 3D printing), and the team is working on a robotic system to assemble them into big items. MIT reports, “The team is now developing an assembler robot that can crawl, insectlike, over the surface of a growing structure, adding pieces one by one to the existing structure.” 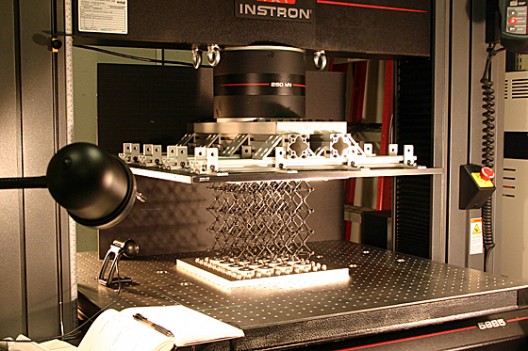 In the lab, a sample of the cellular composite material is prepared for testing of its strength properties.  Photo courtesy of Kenneth Cheung

This avoids the high cost of buildings that need to be constructed to house all the big parts that go into things like airplanes.  Boeing created one of the largest structures in the world to contain the production and final assembly of the 747, and Airbus has the problem of shipping huge A380 components on barges and through tiny villages to build a final assembly.  Overseas suppliers for 787 components have to construct large factories and solve the problem of hauling big pieces trans-continentally.

MIT expands on the advantages of CBA’s work.  “Pound for pound, the new technique allows much less material to carry a given load. This could not only reduce the weight of vehicles, for example — which could significantly lower fuel use and operating costs — but also reduce the costs of construction and assembly, while allowing greater design flexibility. The system is useful for ‘anything you need to move, or put in the air or in space,’ says Cheung, who will begin work this fall as an engineer at NASA’s Ames Research Center.” 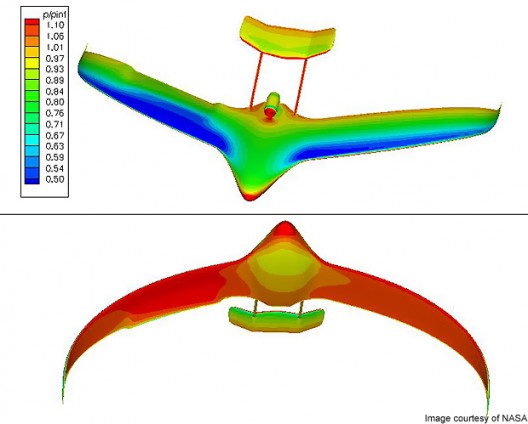 NASA’s concept for an aircraft made with morphing metals, similar to the materials developed at MIT.  This simulates incompressible turbulent flow over a biologically-inspired configuration

Emerging elements of nanotechnology, bio-mimetics and smart material technology could one day allow aircraft to rival the flight control of birds, as suggested by the swift-like morphing of a NASA concept shown above.  Others are working with conventional materials to exact better performance from even unmanned aerial vehicles, as shown in the video below.

The tiny pieces also distribute stresses in a way that means failures are on a small scale, with “massively redundant” structures surrounding the failed member.  Large scale failures would take place in an incremental way, rather than the abrupt snap, crackle and pop of conventional composite structures.

Mimicking nature, Cheung’s cubocts are “similar to the crystal structure of the mineral perovskite, a major component of Earth’s crust.” Like that material, or Legos, the cubocts seem to be individually indestructible, “designed to be strong in the directions of forces that might be applied in normal use, and require pressure in an entirely different direction in order to be released.”

In addition to Gershenfeld and Cheung, the project included MIT undergraduate Joseph Kim and alumna Sarah Hovsepian (now at NASA’s Ames Research Center). The work was supported by the Defense Advanced Research Projects Agency and the sponsors of the Center for Bits and Atoms, with Spirit Aerosystems collaborating on the composite development.