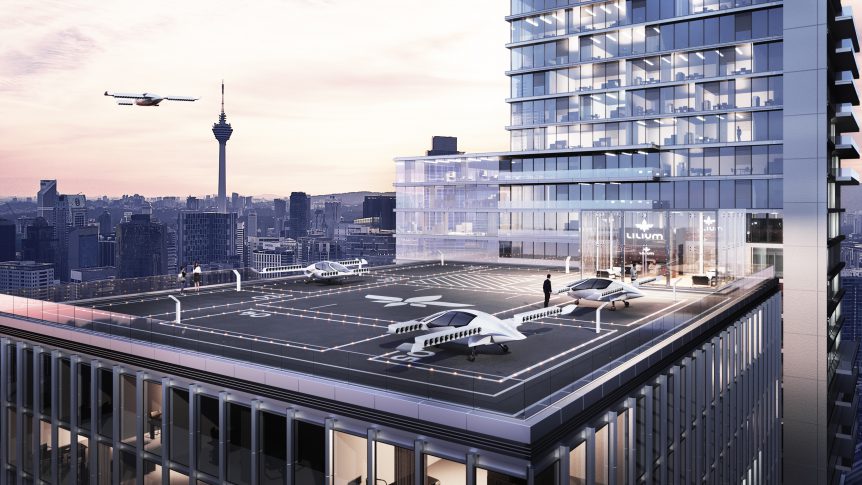 A German vertical takeoff and landing (VTOL) machine made a surprise test flight recently, seemingly too early in its development to be airborne.  Lilium, its name derived from that of Otto Lilienthal, flew its full-sized, two-seat prototype in April, at a partially-disclosed location – somewhere close to Munich.  Awash in technology, the craft looks well adapted to its role as an urban cruiser, lifting its passengers above the earthbound fray and flying them at the speed of a Formula One racer to their destination.

Its 36 motors drive ducted fans grouped in threes.  24 motors fan out along the wings and 12 cluster along the nose.  Lilium calls their power plants electric jet engines and groups three engines in one “flap” – essentially a rotatable block of three.  Designers distribute four flaps along the canard nose and eight along the trailing edge of the wing.  Rotating the blocks down produces upward thrust and vertical flight.  Rotating them forward produces forward thrust and high speed (up to 300 kilometers per hour or 186 mph) forward flight.

Lilium claims this approach simplifies the normally complex mechanisms for achieving VTOL flight, requiring only tilting the flaps to go up, down, or forward.  Differential thrust in horizontal flight controls direction and does away with a vertical tail.

Obviously, all this requires a powerhouse software suite, actuators, and motor controllers.  Nobody we know has flown this many power plants without software assistance.  Even a B-36 had only six reciprocating engines and four jets (six turning and four burning), and required highly-skilled pilots.  If Lilium were manually controlled, it would be particularly dicey in transitions from hovering to high-speed flight, for instance.

Lilium reduces the white-knuckle experience, though.  “As the engines always maintain attached flow on the surface of the flaps, the Lilium-Jet is highly maneuverable in any flight condition. It can do climbing, curves and high-rate sinking in any phase of a transitional flight. This feature is highly important when flying in narrow corridors in urban areas or for avoiding unexpected objects during a transition flight.”

“Ultra redundancy” allows control even with multiple failures, and since the machine is a consumer product, designers have built in safety systems to allow safe landings regardless.  Further, “…the system has a built-in flight envelope protection: meaning that even if the pilot requests a dangerous maneuver, the computer does not exceed safety limits of speed, roll, and pitch.” 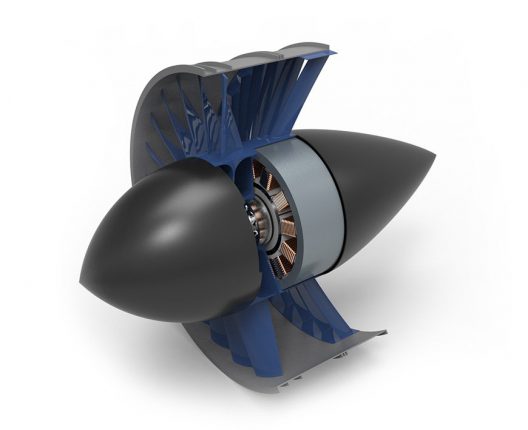 Even with 36 spinning turbines, these are so small and contained that they produce little vibration, according to Lilium.  The machine is also reportedly low in noise, although the test flight video overlays a music sound track to cover any untoward frequencies.  They are shielded in such a way as to prevent a ‘cascade effect” if one motor tosses turbine blades, for instance.

The “several thousand Lithium-Ion cells” in the battery pack are “built with many independent parallel strings of cells ensuring multi-redundancy also on the energy supply.”  The battery pack is also designed to “contain” a thermal runaway of even several cells and still maintain flyable power.

As a final measure, every Lilium has a full-aircraft parachute.  A “water resistant” carbon fiber structure provides security if the descent happens over a lake or ocean.

The biggest hurdle might be range, claimed to be 300 kilometers, or one hour of flight.  Perhaps that’s why initial flights are shown within fairly tight boundaries, competing with ground-bound taxis, but at much lower prices.  Doubtless, the flight vehicle will cost more than a Prius or Hyundai hybrid, so will low costs for electric charging make up for the initial price differential? 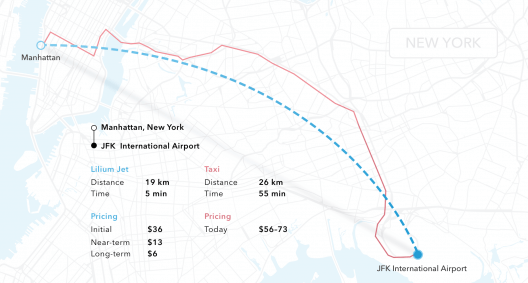 The test flight as shown is short and involves no passengers.  The rapid development schedule slows a bit for that event, with first people-carrying trips not until 2019.  In the meantime, this complex craft will probably be well sorted out and refined.  Several million dollars and DLR (the German space agency) assistance have helped bring this about.  Will it be part of Uber’s network, or a worthy competitor when it comes to market?