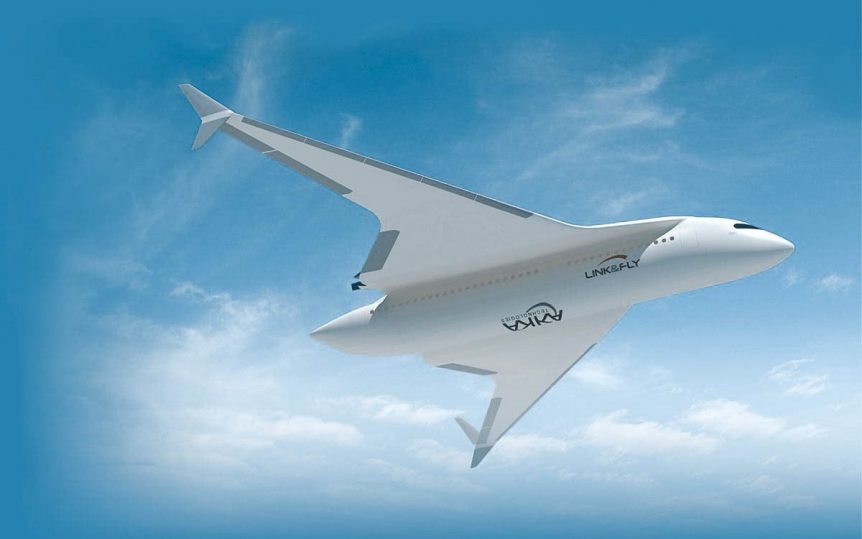 Link & Fly could speed up airport ground operations and make more flights per day possible.  AKKA Technologies, a French consulting and design firm, links two of its areas of expertise, railways and aircraft, in an airborne equivalent of linking an available flight vehicle to a railroad passenger “car.”  First shown at this year’s Paris Air Show, the aircraft, “Addresses multiple passenger, aircraft, and infrastructure operational challenges through innovative technologies.”

Today, AKKA announced the successful test flight of a 1:13 turbine jet drone near Toulouse, France, which the company lauded as, “An exciting moment for AKKA and a major step in the Link & Fly project.”    AKKA adds, “This is the minimum scale model required to adequately reproduce flying conditions and validate the flight physics of the full-sized aircraft.”

Roughly equivalent to a Boeing 737 or Airbus A320, Link & Fly has a 40-foot longer wingspan to carry a roughly equivalent load as the Airbus and Boeing, giving is a much lighter span loading, which should provide a good rate of climb. Because the company does not seem to have provided engine specifications, we are not able to determine if the possibly smaller (than Airbus or Boeing) engines would help extend the range and enhance economy otherwise.

We do know some form of inductive coils and power electronics would extend and retract the landing gear.

Otherwise, the rationale for the plane’s existence is to “increase the number of rotations for airlines,” estimated for short-range flights to rise from seven per day to nine.  This would come from a turnaround time on the ground of 20 minutes instead of 50 minutes today for single-aisle, medium-haul aircraft.  According to AKKA, reduced turnaround times would reduce congestion in and around airports, facilitate and improve cabin maintenance, and optimize hangar storage space and airport ground operations.

AKKA Link & Fly would require additions to, or total revision of existing airports

One downside is that airport infrastructure itself would need to be radically altered to accommodate a new type of passenger and aircraft loading and ground handling for the two units that need to be mated and detached before and after flight.  This would have to be done at every airport to which the new craft would fly.  Will municipalities be willing to make large changes to support airlines’ and their operations?

Some of the possible innovations include retinal scanning to obviate the need for TSA-type personal patdowns and shoe removal.  Anything that reduces personal intrusion will doubtless be welcomed by passengers.

Highly innovative solutions require changes in our perceptions and behavior.  Link & Fly has potential to make flying more efficient and enjoyable, but will also require investments that may overwhelm its adoption.

Regardless, Mauro Ricci, Founder & CEO of AKKA. concludes, “Link & Fly sets a new benchmark in multimodal aircraft development. This is why I am particularly proud of this milestone – it takes ambitious ideas, together with solid engineering skills from all parts of our business to make bold innovation happen.  We look forward to announcing the next chapter in what is not your usual aircraft program!”