Shadi Dayeh, professor in the Department of Electrical and Computer Engineering at the UC San Diego Jacobs School of Engineering, has been designing new electrode architectures that could solve one of lithium batteries’ biggest problems.  When lithium diffuses across the surface of a lithium-ion battery electrode, it causes the electrode to expand and contract depending on its charging or discharging.  This eventually leads to cracking and ultimate disintegration of the anode or cathode – weakening and finally disabling the battery.

Dayeh, working with colleagues at the University and Sandia and Los Alamos National Laboratories, came up with nanowires that, “Block diffusion of lithium (Li) across their silicon surface and promote layer-by-layer axial lithiation of the nanowire’s germanium core.”

Seeing possibilities beyond his current research, Dayeh says the work could lead to, “An effective way to tailor volume expansion of lithium ion battery electrodes which could potentially minimize their cracking, improve their durability, and perhaps influence how one could think about different electrode architectures.”

These axial wraps apparently introduce discontinuities that control the manner and direction in which lithium ions are inserted into an electrode, as in this quote from a Green Car Congress article on the process.

…Batteries, as electronic devices, require both mass and charge transport in a harmonious manner during their operation. The flow of charges has huge impacts on the materials. For instance, the direction of volume expansion is perpendicular to the lithiation reaction front (i.e., the interface between LixM and M), as if the Li ions are digging into the anode material and pushing the lithiated products in their wake. Therefore, the volume expansion could be also controlled by defining the Li insertion direction. As the electrons and Li ions must meet to initiate lithiation, this requires manipulation of the charged particles (electrons, Li ions, or both) to flow in a controlled manner. In the past two decades, it has been shown that ionic transport properties can be dominated by interfaces at the nanoscale, which provides the possibility to control the Li diffusion pathways and to modify the volume expansion direction by introducing heterojunctions (namely chemical and structural discontinuities).

“These results demonstrate for the first time that interface and bandgap engineering of electrochemical reactions can be utilized to control the nanoscale ionic transport / insertion paths and thus may be a new tool to define the electrochemical reactions in Li-ion batteries,” researchers explain in their Nano Letters cover letter, “Tailoring Lithiation Behavior by Interface and Bandgap Engineering at the Nanoscale.”  Dayeh and his fellow researchers also published a longer cover article in Applied Physics Letters.  Both give mordetailed explanations of the geometries and techniques applied in making the more compliant nanowires. 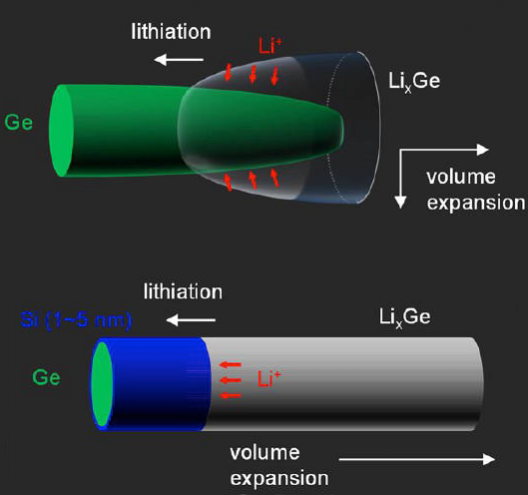 Axially-wrapping germanium can control direction and volume of electrode expansion

All this could lead to more durable and perhaps more powerful batteries.  Of interest is the application of principles put forward by Dr. Yi Cui of Stanford University and Dr.Jaephil Cho of the Interdisciplinary School of Green Energy at Ulsan Institute of Science and Technology, South Korea.  Both have been speakers at Electric Aircraft Symposia.

As noted in Science Daily, Dayeh grew the nanowires during his time as a postdoctoral researcher at Los Alamos National Laboratory (LANL). Lithiation experiments were performed by two postdoctoral researchers from Sandia National Laboratories, Drs. Yang Liu and Xiaohua Liu, and Dayeh’s postdocdoral researchers working at LANL. Dayeh formulated the mechanism and performed the analysis and simulations after joining the faculty of the Electrical and Computer Engineering Department at the UC San Diego Jacobs School of Engineering.