Allen Chen at the University of California at Berkeley reports that researchers at the U.S. Department of Energy’s Lawrence Berkeley National Laboratory (Berkeley Lab) “have demonstrated in the laboratory a lithium-sulfur (Li/S) battery that has more than twice the specific energy of lithium-ion batteries, and that lasts for more than 1,500 cycles of charge-discharge with minimal decay of the battery’s capacity,” the longest cycle life reported so far for any lithium-sulfur battery.

Working on the premise that if electric vehicles are to have a 300-mile range, researchers explain that batteries will need to provide a cell-level specific energy of 350 to 400 Watt-hours per kilogram (Wh/kg), roughly double that of lithium-ion batteries.

They should also manage at least 1,000, and preferably 1,500 charge-discharge cycles before showing noticeable power loss.

Elton Cairns, of the Environmental Energy Technologies Division (EETD), is a professor at Berkeley in the The Berkeley Energy Storage and Conversion for Transportation and Renewables (BESTAR) Program.  Part of their purpose is to “overcome the technological barriers to next-generation batteries and fuel cells for the low emissions transportation and grid storage technologies required for a clean, sustainable energy system.”  Cairns pushes toward a “holistic” approach, working on not just isolated components, but an integrated whole.  This is part of their larger goal. “Our cells may provide a substantial opportunity for the development of zero-emission vehicles with a driving range similar to that of gasoline vehicles.” 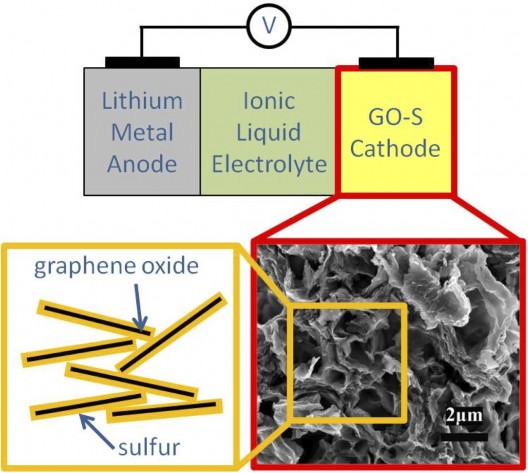 Lithium-sulfur, like lithium-ion, has significant problems to solve.  On discharge, lithium polysulfides, dissolved from the cathode into the electrolytes, then react with the lithium anode and form a layer of Li2S around it, reducing its reactivity and shortening battery life.

Like lithium-ion cells, the sulfur electrode swells and contracts up to 76 percent during charging and discharging, eventually degrading the electrode and causing sulfur particles to depart from it.

The research team developed a cathode of sulfur-graphene oxide (S-GO), which can deal with changing volume of the electrode’s active material when sulfur is converted to Li2S on discharge, and back to elemental sulfur on recharge.

Somewhat similar to Dr. Cui’s work with silicon electrodes at Stanford, the team used an elastomeric binder combining elastomeric styrene butadiene rubber (SBR) binder with a thickening agent to help hold things together overall, seeing an increase in cycle life and power density for the cell.

They used cetyltrimethyl ammonium bromide (CTAB), a surfactant used in drug delivery and other chemical process to coat the sulfur electrode, preventing destructive penetration and dissolution of the electrode material by the electrolyte.

They also developed “a novel ionic liquid based electrolyte,” which  “inhibits polysulfides dissolution and helps the battery operate at a high rate, increasing the speed at which the battery can be charged up, and the power it can deliver during discharge.”  Because it is non-volatile and non-flammable, the ionic liquid-based electrolyte also significantly improves the safety of the Li-S battery.

Cairns seems happy with the results so far, saying, “It’s the unique combination of these elements in the cell chemistry and design that has led to a lithium-sulfur cell whose performance has never been achieved in the laboratory before—long life, high rate capability, and high cell-level specific energy,”

This research was funded by the U.S. Department of Energy’s Office of Science and a University of California’s Proof of Concept Award.