Who wouldn’t want both?  Researchers in Germany and America are making great inroads on lithium battery energy density, while  adding some hope that batteries may someday outlast the vehicle in which they are installed.

Ulm, Germany, where the Berblinger Competition encourages economical flight, may be a resource for making such flight possible.  The Zentrum für Sonnenenergie- und WasserstoffForschung Baden-Württemberg (Centre for Solar Energy and Hydrogen Research Baden-Württemberg, ZSW), has announced what they claim to be world-beating cells in terms of cycle life.

ZSW batteries, shown here in 18650 format, can also be made in larger formats and prismatic pouch-type units

Dr. Margret Wohlfahrt-Mehrens, Head of the Accumulator Material Research Department in Ulm reports, “After 10,000 complete charging and discharging cycles with a complete charge and discharge cycle per hour (2 C), our lithium batteries still have more than 85 % of the initial capacity.”

This would be equivalent to a full charge and discharge cycle every day for over 27 years.

Margret Wohlfahrt-Mehrens says researchers at ZSW want to develop electrodes for large prismatic lithium cells together with partners from industry. “It’s essential to master the currently demonstrated cell technology before going on to produce large cells,”  and although further research and development work is necessary, upscaling is in principle possible.

Working along other lines, researchers at Oak Ridge National Laboratory (ORNL), “Have designed and tested an all-solid lithium-sulfur battery with approximately four times the energy density of conventional lithium-ion technologies,” according to the Laboratory. The battery should also be less flammable than conventional lithium cells.

Following research described six months ago in this blog, ORNL has been trying to reach commercialization of rechargeable lithium-sulfur batteries, hoping to combine the potentially higher energy density of the chemistry with extended cycle life.  Up to a point, this was held back by liquid electrolytes which assisted ion conduction but also caused the battery to break down prematurely.

According to their press release, “The ORNL team overcame these barriers by first synthesizing a new class of sulfur-rich materials—lithium polysulfidophosphates (LPSPs)—that conduct ions as well as the lithium metal oxides conventionally used in the battery’s cathode. 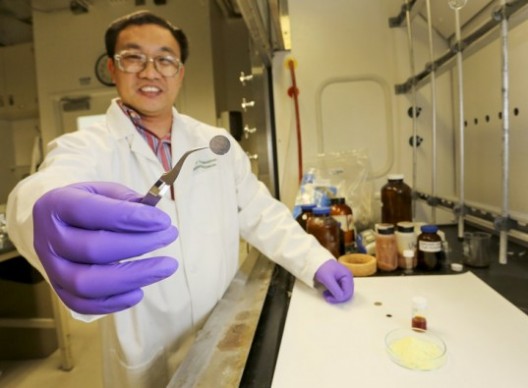 “LPSPs have ionic conductivities of 3.0×10−5 S cm−1 at 25 °C, which is 8 orders of magnitude higher than that of Li2S (lithium sulfide). The high lithium ion conductivity imparts excellent cycling performance, the researchers noted.

“The researchers then combined the new sulfur-rich cathode and a lithium anode with a solid electrolyte material, also developed at ORNL, to create an energy-dense, all-solid battery.”

As written by Chengdu Liang, the team’s paper in the journal Angewandte Chemie International Edition, explains their new approach:

“Our approach is a complete change from the current battery concept of two electrodes joined by a liquid electrolyte, which has been used over the last 150 to 200 years. This game-changing shift from liquid to solid electrolytes eliminates the problem of sulfur dissolution and enables us to deliver on the promise of lithium-sulfur batteries. Our battery design has real potential to reduce cost, increase energy density and improve safety compared with existing lithium-ion technologies”

Their new ionically-conductive cathode helped the battery maintain a capacity of 1,200 mAh per gram after 300 charge-discharge cycles at 60 °C. Conventional lithium-ion battery cathodes average between 140-170 mAh/g.

“Because lithium-sulfur batteries deliver about half the voltage of lithium-ion versions, this eight-fold increase in capacity demonstrated in the ORNL battery cathode translates into four times the gravimetric energy density of lithium-ion technologies, explained Liang.”

By eliminating liquid electrolytes that can react with lithium metal, ORNL scientists have reduced the risk of fires.

Although the team’s new battery is still in the demonstration stage, Liang and his colleagues hope to see their research move quickly from the laboratory into commercial applications. A patent on the team’s design is pending.

Both teams seem to be heading toward greater energy and power density with longer cycle life and greater safety than current cells provide.  Perhaps these paths will cross as we approach the long-awaited 10X battery.