Paradoxically, almost every battery breakthrough seems to have an accompanying problem, and battery developers end up sometimes ditching the positive because of an overriding negative.  Solid-state batteries promise some gains without compromise, though.

Conventional lithium-ion batteries have possibly reached the limit of their capacity, some scientists fear, and still remain prone to issues like thermal runaway.  Developers have looked at solid-state battery designs in which even the electrolyte is solid and not prone to bursting into flame.  These batteries promise to have higher energy densities and longer lives, but high resistance at the electrolyte-electrode interface tends to interfere with charging and discharging speeds.

Two groups of researchers at the Tokyo Institute of Technology have been taking different approaches to creating a solid-state battery with improved performance and few of the disadvantages of more conventional lithium cells.

Researchers used X-ray diffraction and Raman spectroscopy to characterize electrochemical properties of the batteries by analyzing the crystal structure of the batteries’ thin films.  They found “spontaneous migration of lithium ions from the Li3PO4 (Lithium Phosphate) layer to the LNMO layer, which converted half the LNMO to L2NMO at the Li3PO4/LNMO interface.  This migration reverses during initial charging to regenerate LNMO.”

The batteries were made by stacking various layers via thin-film deposition methods. The LNMO/Li3PO4 interface showed spontaneous migration of Li ions and had an unprecedentedly low resistance.  Illustration: ACS Applied Materials & Interfaces

Researchers tested the impedance of the cells using electrochemical impedance spectroscopy.  Resistance “was 7.6 Ω cm2, two orders of magnitude smaller than that of previous LMNO-based all-solid-state batteries and even smaller than that of liquid-electrolyte-based Li-ion batteries using LNMO.”  These batteries also charged and discharged faster, “managing to charge/discharge half the battery within just one second.”  They  also showed “no degradation in performance even after 100 charge/discharge cycles.”

The team’s paper was published in ACS Applied Materials & Interfaces. 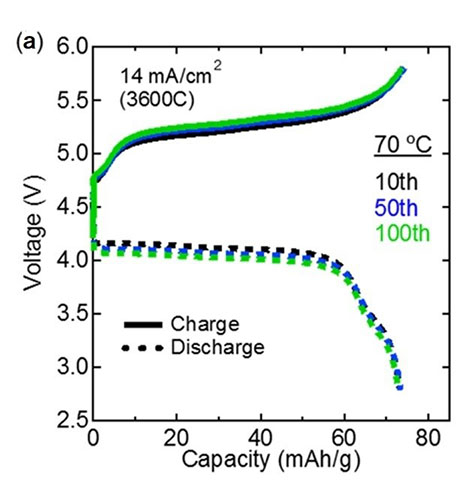 Performance of the fabricated all-solid-state batteries.  The (a) charge-discharge curves… 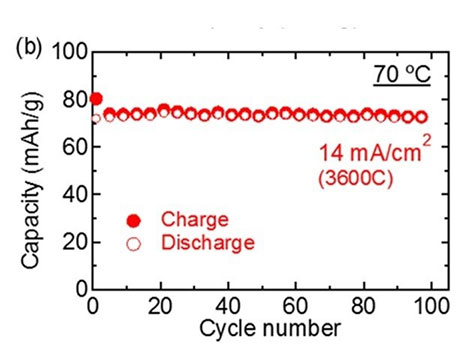 …and the (b) cycling performance plot show that the performance of the fabricated all-solid-state batteries did not degrade after repeated use, demonstrating their excellent stability and the total reversibility of the reactions involved in charging/discharging.

Li(Ni0.5Mn1.5)O4 is a promising material to increase the energy density of a battery, because the material provides us of a higher voltage. The research team hopes that these results will facilitate the development of high-performance all-solid-state batteries, which could revolutionize modern portable electronic devices and electric cars.

A second group at Tokyo Tech, led by Professor Ryoji Kanno of the Department of Electronic Chemistry, Interdisciplinary Graduate School of Science and Engineering, also works on solid-state batteries.

Currently, Kanno is mainly focusing his energy on the development of all-solid-state batteries, which dispense with the liquid electrolyte that is part of even so-called dry cells.  The organic solvents that act as electrolytes in many lithium batteries are combustible, a big safety concern – especially in aircraft.

Kanno’s all-solid-state batteries “replace organic solvent with solid material, significantly improving safety while making it possible to handle larger amounts of electricity. The travel distance of an electric automobile utilizing this type of battery, for example, can be increased from 200 kilometers (124 miles) to 500 kilometers (310 miles) on a single charge. A more compact design is also possible as all-solid-state batteries do not require the safety devices required for organic solvent.”

Kanno explains “’Solidity reduces combustibility and increases safety. Furthermore, all-solid-state batteries function over a wide range of temperatures and easily pass current to provide increased power. Quick recharge is also a feature. While all-solid-state batteries have great merits, their one disadvantage is in initiating a contact because, unlike organic solvent, contact requires an interface. If we can solve this problem, the goal of commercialization will be within reach.’”

Commercialization is certainly a part of what is driving Japanese research.  As background, these notes from an article by Bertel Schmitt in Forbes magazine illuminate Toyota’s involvement in at least some of the research being done at Tokyo Tech and elsewhere.

“Solid-state batteries promise to do away with the liquids that caused the build-up of current in batteries ever since Mr. Volta dipped copper plates into brine. Those liquid electrolytes soon became nastier, and sulfuric acid keeps sloshing through car batteries to this very day. “Dry” cells never were completely dry, they use a moist paste that sometimes leaks out. Higher powered lithium-ion batteries can get sometimes way too hot, as the Galaxy Note 7, or the occasional electric vehicle fire can attest.

“Solid state batteries are no fire hazard, they promise to recharge faster, store more power in a given volume, and, especially interesting for automobile engineers, they can be molded into many shapes.