Following rigorous evaluations of all aircraft to ensure they meet all standards for the contest, Dr. Brien Seeley, President of the CAFE Foundation, announced the 13 entrants who will compete in the Green Flight Challenge at Santa Rosa, California between July 11 and 17, 2011.  This exciting event will offer the public a first view of some incredible designs and resourceful competitors.  Since the minimum performance required for consideration includes things such as the ability to fly a 200 mile course at 100 mph or better average speed, the ability to clear a 50-foot barrier on a 2,000 foot runway during both takeoff and landing, and the efficiency to attain at least 200 passenger miles per gallon during the overall flight, all aircraft are obviously the most efficient aerial creations yet seen.  Rules were established to encourage designers to make “real world”, practical craft rather than specialized designs that could win the contest but find no real purpose or willing owners.  Even things such as cockpit design and visibility play a part in the designs, with every effort to bring designs to the aviation public that will meet with broad acceptance.  This can be a seminal moment in aviation, helping usher in a new era of environmentally sound, but exciting, high-performance , truly modern airplanes. 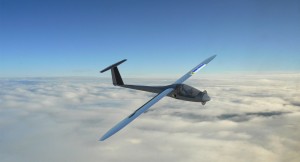 Entrants include seemingly every possible type of powerplant, an amazing array of configurations, and some obviously inspired design.

1.  Einar Enevoldson, team lead for the PC Aero entry will field the Elektra 1, a single-seater from Calin Gologan’s design team.  With 21 kilowatts and a span of 27.6 feet, the aircraft will fly on electric power.

2. Gene Sheehan and the Fueling Green Flight Challenger team will fly an electric airplane that looks a lot like a Quickie.  Its 16 kW electric motor will propel the 16.7 foot span, single-seat craft around the course.

3.  Gregory Cole, head of Windward Performance  in Oregon has entered the two-seat Goshawk, a 51-foot motorglider-like airplane flying on either avgas or electric power.

U. S. citizen innovators in the CAFE Green Flight Challenge will apply and demonstrate aircraft technologies from all over the world.  Power ranges from 15 kilowatts (20 horsepower) to 145 kW (194 hp).  Wingspans go from 15 feet to 75 feet, and aircraft offer seating for one to six.  Powerplants include all the possibilities, from pure electric to hybrids to bi-diesel and ethanol-fueled internal combustion units.  This contest will field a broader range of aircraft than anything yet seen and should demonstrate the possibilities inherent when innovation and creativity are allowed free rein.

Dr. Larry Ford, Vice President of the CAFE Foundation, will present an overview of the aircraft at the fifth annual Electric Aircraft Symposium to be held in Santa Rosa, California on April 29 and 30, 2011.  Be sure to attend to be part of the new wave in flight.