SolidEnergy is an MIT spin-off with a lithium battery that’s been touted by R&D Magazine as “potentially…the biggest breakthrough in battery technology since Sony introduced the first Li-ion battery in 1991.”  Unlike other manufacturers with indefinite product dates, SolidEnergy says it will release a 2 Amp-hour smartphone and wearable battery in 2016 and a 20 Ah electric vehicle battery in 2017.

We reported on this company last year when Dr.  Qichao Hu, CEO and Chief Technology Officer of SolidEnergy, spoke at the eighth Electric Aircraft Symposium in Santa Rosa, California. 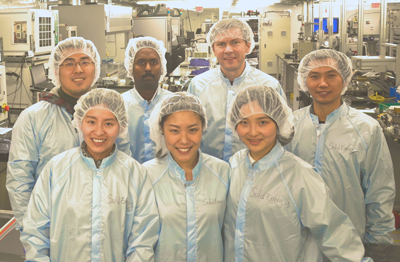 One of their features involves manufacturing: the best battery in the world means very little if it can’t be made in quantity.  SolidEnergy’s cells can be made in existing Li-ion facilities.  Because of that, the process can leverage a mature infrastructure.  A123 Venture Technologies has partnered with SolidEnergy to facilitate that.

The battery’s makeup is instructive, as explained in Green Car Congress’s write-up.

“The SolidEnergy prototypes combine a cathode (SPIL can work with a range of cathode materials); the novel electrolyte; and a solid-polymer-coated lithium metal anode. The electrolyte combines ionic liquid and liquid polymer to provide both the safety and wide temperature capability required for advanced batteries, while the solid-polymer-coated lithium anode boosts energy density and cycle life. In addition, Lithium dendrite- suppressing additives boost safety.”

A “solid graft copolymer electrolyte (GCE) combined with a lithium salt becomes a solid electrolyte, looking and feeling like a “rubbery solid but still possessing high ionic conductivity: a block copolymer electrolyte (BCE).”  A solid polymer coating “with dendrite-suppressing additives” surrounding the anode (essentially the pouch case) prevents the growth of spikes that would otherwise penetrate the anode and cause short circuits.

Moving from prototyping to full manufacturing puts the group in a competitive position with other advanced battery makers such as Sakti3 and rewrites the normal ending to these stories.  Instead of the usual “Commercial production is expected in five to ten years,” we can look forward to seeing these batteries in consumer products next year, and in our electric and hybrid cars in two.  The future grows closer.