James Hone and Jeffrey Kysar, professors of mechanical engineering at Columbia University, learned that the enormous strength of graphene is usually achieved in only small patches.  The “grain boundaries” for larger sheets were often far weaker than the theoretical strengths of which the material is capable. 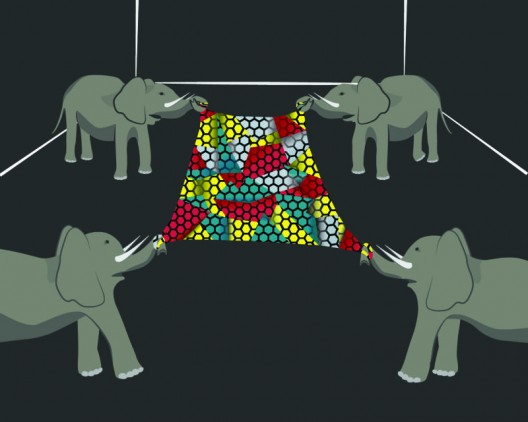 Only one atom thick, graphene sheet could withstand an elephant tug-of-war.   Illustration by Andrew Shea for Columbia Engineering

That strength is phenomenal.  Hone explains, “It would take an elephant, balanced on a pencil, to break through a sheet of graphene the thickness of Saran Wrap.”

Results of their study were published in the journal Science.

The paper’s lead author, Gwan-Hyoung Lee, a postdoctoral fellow in the Hone lab, says, “Our findings clearly correct the mistaken consensus that grain boundaries of graphene are weak. This is great news because graphene offers such a plethora of opportunities both for fundamental scientific research and industrial applications.”  The team found that they can grow television-sized sheets of graphene using CVD on copper substrates in a high-temperature furnace.

Kysar notes that “…CVD graphene is ‘stitched’ together from many small crystalline grains — like a quilt — at grain boundaries that contain defects in the atomic structure.”  The research team has found that they can achieve 90-percent of “ideal crystal” strength at sizes practical for use in real-world applications.

“This is an exciting result for the future of graphene, because it provides experimental evidence that the exceptional strength it possesses at the atomic scale can persist all the way up to samples inches or more in size,” says Hone. “This strength will be invaluable as scientists continue to develop new flexible electronics and ultrastrong composite materials.”

The team concludes that, “With appropriate processing that avoids surface damage, grain boundaries in 2D materials, especially graphene, can be nearly as strong as the perfect, defect-free structure.”

The study was supported by grants from the Air Force Office of Scientific Research and the National Science Foundation.

Apropos of “stitching” and “quilting”, Dr. Brien Seeley, President of the CAFE Foundation, shared this item from Jennifer Chu in the MIT news office.  Her article, “Planes, trains and automobiles: faster, stronger, lighter,” looks at a technique Brian Wardle, an associate professor of aeronautics and astronautics, and his doctoral and post-doctoral students conceived to strengthen carbon fiber, probably not a close second to graphene for overall strength.

Airplanes such as the Boeing 787 and Airbus 380 use advanced carbon-fiber composites to reduce aircraft weights by 20 percent.  Ever desiring even stronger, lighter materials, though, “Researchers are looking to even stronger and lighter materials, such as composites made with carbon fibers coated with carbon nanotubes — tiny tubes of crystalline carbon. When arranged in certain configurations, nanotubes can be hundreds of times stronger than steel, but only one-sixth the weight, making such composites attractive for use in airplanes, as well as cars, trains, spacecraft and satellites.

“But a significant hurdle to achieving such composites lies at the nanoscale: Scientists who have tried growing carbon nanotubes on carbon fibers have found that doing so significantly degrades the underlying fibers, stripping them of their inherent strength.”

Wardle and his team have found the root cause of this, and came up with ways to maintain the native fibers’ strength.  Coating carbon fibers with nanotubes not only made the fibers stronger, but also more electrically conductive.  They can also fit into current manufacturing processes. 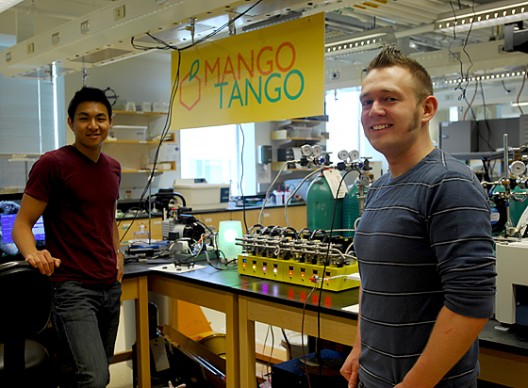 A paper detailing the results by Wardle and his colleagues is published in the journal ACS Applied Materials and Interfaces.  Co-authors are postdoc Stephen Steiner, who contributed to the research as a graduate student, and Richard Li, a graduate student who was an undergraduate in Wardle’s lab.

Visiting carbon-fiber manufacturers in Japan, Germany and Tennessee, Wardle’s team saw how fibers are stretched near breaking at high temperatures, in sharp opposition to the low-tension approach to growing nanotubes on carbon fibers.

Li and Steiner made a small graphite apparatus, across which they strung individual carbon fibers, and hung tiny weights from each fiber to tauten it.   According to their news item, “The group then grew carbon nanotubes on the fibers, first covering the fibers with a special set of coatings, and then heating the fibers in a furnace. They then used chemical vapor deposition to grow a fuzzy layer of nanotubes along each fiber.”

The team developed  a polymer coating called K-PSMA to keep the alumina in place, and which worked like a hair conditioner in reverse.

According to MIT, “Hair conditioners have two seemingly opposite chemical features: a water-absorbent component that allows the conditioner to stick to hair, and a waterproof component that keeps hair from getting frizzy. Likewise, K-PSMA has hydrophilic and hydrophobic components, but its waterproof feature sticks to the carbon fiber, while the water-absorbent component attracts the alumina and the metal catalyst.”

In their tests, the team found that they could reduce the need for tension and drop process temperatures by 300 degrees Celsius than typical and avoid damage to the underlying fiber.

“This process reduces not only the amount of energy and volume of gas required, but the amount of extraneous substances you have to put on the fiber,” Steiner says. “It’s actually pretty simple and cost-effective.”

The researchers have filed a patent for the two strategies, and envision advanced fiber composites incorporating their techniques for a whole range of applications.

Both these studies could lead to lighter, stronger structures –  and in the realm of electric aircraft those are highly desirable properties.  That the materials have potential as either battery materials or even as structures that can act as batteries is part of a trend that we may see in future aircraft designs.