The quandary in producing and using hydrogen is that it’s the most common element in the universe and the oldest, having been formed within a micro-second of the Big Bang.  Despite that, it’s always associated with other materials, and to use pure hydrogen usually requires extracting from the material in which it’s found.  Water is the most common source for hydrogen, but as noted before, getting hydrogen out of water is harder than it looks.

As shown in earlier blog, various techniques have been tried to make this extraction, some seemingly close to providing usable quantities at reasonable prices.  Dr. Daniel Nocera of MIT and later Harvard used a two-catalyst system to pull oxygen and hydrogen from water.

Although the Alka-Seltzer-like reaction seems to have promise, Elena Rozhkova,  a scientist at Argonne’s Center for Nanoscale Materials , has been experimenting with titanium salts in water exposed to light to generate hydrogen

Following on Dr. Nocera’s artificial leaf, Researchers at Berkeley’s Joint Center for Artificial Photosynthesis (JCAP), .  Gary Moore, a chemist and principal investigator with Berkeley Lab’s Physical Biosciences Division, found that in his artificial leaf, “nearly 90-percent of the electrons generated by a hybrid material designed to store solar energy in hydrogen are being stored in the target hydrogen molecules.”  Daniel Nocera’s firm, Catalytix, which combined energy storage with hydrogen generation, has since been acquired by Lockheed-Martin.

Flow batteries have made some recent progress in commercialization, but developing new energy storage technology remains a time- and capital-intensive effort. Perhaps Lockheed-Martin has the wallet and patience to bring this science to market.

Others have taken the artificial leaf concept and continue to develop different approaches to its fruition.  The Singapore-Berkeley Research Initiative for Sustainable Energy (SinBeRISE), a collaboration between Berkeley Professor Ramamoorthy Ramesh, 10-12 Berkeley faculty and adjunct faculty members; and participants from the National University of Singapore (NUS) and Nanyang Technological University (NTU), “will explore novel, inexpensive approaches to convert solar energy into electrical energy (photovoltaics) and to catalyze the conversion of CO2 into liquid fuel (photoelectrochemical cells).” 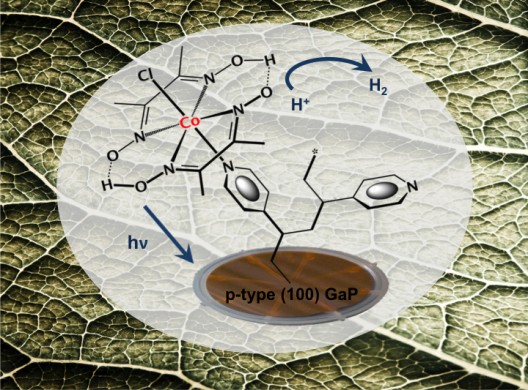 Their efforts seem to at least reduce the energy required to split water. The abstract for their paper in the journal ACS Nano proclaims, “The generation of chemical fuels via direct solar-to-fuel conversion from a fully integrated artificial photosynthetic system is an attractive approach for clean and sustainable energy, but so far there has yet to be a system that would have the acceptable efficiency, durability and can be manufactured at a reasonable cost. Here, we show that a semiconductor mesh made from all inorganic nanowires can achieve unassisted solar-driven, overall water-splitting without using any electron mediators. Free-standing nanowire mesh networks could be made in large scales using solution synthesis and vacuum filtration, making this approach attractive for low cost implementation.”

Another, commercial approach to the problem promises low cost and compact size while achieving just enough voltage to split water.  HyperSolar, using research from their academic partners University of California, Santa Barbara and the University of Iowa to reaching 1.25 Volts generated by a self-contained photoelectrochemical nanosystem.

Green Car Congress explains, “The theoretical minimum voltage needed to split water molecules into hydrogen and oxygen is 1.23 V (at 25 °C 77° F at pH 0). However, in real world systems, 1.5 V or more is generally needed because of the low reaction kinetics. So far, other researchers have mainly achieved this voltage level through the use of either inefficient materials, such as titanium oxide, or very expensive semiconductors, such as gallium arsenide, HyperSolar noted. Further, overcoming the corrosive degradation of these ‘artificial photosynthesis’ systems remains a challenge and has thus far eluded commercialization.”

HyperSolar’s technology mimics photosynthesis and contains a solar absorber that generates electrons from sunlight, and integrated cathode and anode areas to “readily split water and transfer those electrons to the molecular bonds of hydrogen.”

Because HyperSolar’s design is at the nano level, more electrons produced are retained, unlike the losses incurred by larger conventional solar panels, and lowers the cost of the process.  A proprietary protective coating “encapsulates key elements,” allowing submersion in a “wide range of water conditions without corrosion.”  The device can work in salt or fresh water and unlike more expensive units that require distilled water, is a hardier breed of water splitter.  Tim Young, CEO of HyperSolar, says, “The respective hydrogen and oxygen gas bubbles to the top of the reactor as two separate and pure gas streams,” enabling isolation and storage of the output.

While 1.23 volts is the theoretical minimum needed to split water molecules, HyperSolar anticipates requiring 1.5 volts or more to do so effectively in real world systems. 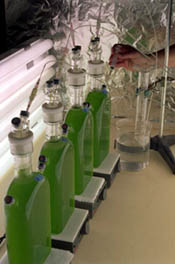 NREL is in early stages of photobiological water splitting, still too slow a process for commercialization

Going one step further into mimicking Mother Nature, the NREL discusses photobiological water splitting, which involves both organic and inorganic materials to produce hydrogen from water.  Its attraction is that it’s a low-energy process, but at issue is its extremely slow process speed, relying on the production of algae.  Watching grass grow would be as exciting and maybe quicker.  If researchers can find a way to speed this along, it may one day be commercially viable.

Next: Distribution Plans for Real-World Applications.