Your editor received this sad announcement yesterday from Andy Kecskes, editor of the Sailplane Builder newsletter, forwarded from Murry Rozansky, President of the Experimental Soaring Association.

“Bruce Carmichael passed peacefully with his family by his side on Tues. I am glad that our and the other soaring organizations honored his contributions before this sad event. Bruce was 91+years old, an accomplishment in itself.  There will be a celebration of Bruce’s life on Sat. Aug. 15th at 10:30 am at Palisade’s Methodist Church, 27002 Camino de Estrella, Capistrano Beach, CA.  Reception to follow services.”  Please RSVP to; georgianatives@yahoo.com.” 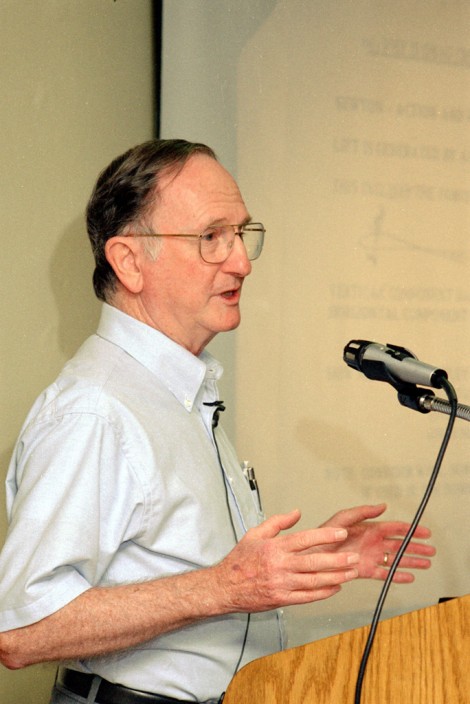 Bruce Carmichael speaking at a meeting on flying wings

Bruce was a pioneer in low-Reynolds number aerodynamics, and had been influential in the design of many record-breaking and visionary aircraft.  He is listed as part of the team on Solar-Flight’s web page, performed a detailed design analysis and drag breakdown on Mike Arnold’s record-breaking AR-5, and was inspiration for many designers to explore the new realm of microlift, a low-speed, high-lift concept that led to ultralight sailplanes such as Danny Howell’s Lighthawk, the Archaeopteryx, and Ilan Kroo’s Swift flying wing.

His work with Mississippi State’s Raspet Flight Research Laboratory and Dr. August Raspet on boundary layer control influenced a generation of designers, and coupled with his life-long research efforts, led to his being awarded the OSTIV (Organisation Scientifique et Technique Internationale du Vol `a Voile, or the International Scientific and Technical Organization for Gliding) Plaque with Klemperer Award in 2014, the soaring equivalent of the Nobel or Pulitzer Prize.  The Plaque was awarded, “For his many significant contributions to soaring technology in laminar flow research, scholarly papers, popular articles, books and seminars in recent years.”

The blocks on the left represent the very low Reynolds number areas in which Bruce Carmichael contributed his insight, and which led to the kinds of light and ultralight sailplanes shown

“He has made information on laminar flow research, design and practical operation from more than forty years of industry and personal experience available to a wide audience through his many scholarly papers, popular magazine articles and books on ultralight gliders, sailplanes, motor gliders and personal aircraft drag reduction. In addition, he has planned, organized and conducted dozens of seminars and conferences on soaring technology which have introduced many interested people to the science and culture of soaring. He has inspired and motivated several generations of soaring enthusiasts.”

Bruce was a gentle and dignified gentleman who asked your editor to present at the Western Workshop of the Experimental Soaring Association ten years ago.  This led to a friendship and an invitation to present at the following year’s Workshop.  That year, your editor’s presentation on available model aircraft electric motors caught the eye of Dr. Brien Seeley, founder and President of the CAFE Foundation, who invited your editor to speak at the third annual Electric Aircraft Symposium.  After presenting at several more Symposiums and Workshops, your editor was approached again by Dr. Seeley who asked that he write the CAFE blog, an enormous honor considering the non-expert status of this English major ex-teacher and retired technical writer.  Incidentally, one surprising thing that helped cement our relationship was that Bruce wrote poetry about the scientific interests he pursued.

Any success this blog has had through the last five years and over 800 entries is a direct outgrowth of Bruce Carmichael’s invitation and continuing support. Your editor is deeply indebted and saddened by the loss of a great man and a great and true friend.