The French call the English Channel “la Manche” (the sleeve), nicely describing the shape of the waterway  while neatly avoiding calling it “English.”

Gerard Thevenot, a long-time championship-level hang-glider pilot, celebrated the centennial of Louis Bleriot’s flight across la Manche by flying his hydrogen-powered La Mouette hang glider over roughly the same route Bleriot took between Calais and Dover on August 6, 2009.  Missing the centenary by a few days (Bleriot made the hop on July 25, 1909), Thevenot took an hour and seven minutes to duplicate the trip Bleriot managed in 37 minutes.

Having displayed his craft at Aero Expo 2009 at Friedrichshafen, Germany in April, Thevenot also participated in the Coupe-Icare, an aeronautical-artistic fantasia near Grenoble, France before making his historic flight.

Like Bleriot, he essentially created his own machine, crafting a simple trike frame to attach to his wing, and adding two hydrogen cylinders, three 2 kW fuel cells, and the controller, motor and propeller developed by Drs. Eck and Geiger.  Unlike Bleriot, he managed a great landing, one following which he could re-use the airplane.  Bleriot did damage to his landing gear and propeller while attempting to set down in the turbulence above the beach at Dover, but brushed it off as of no importance. 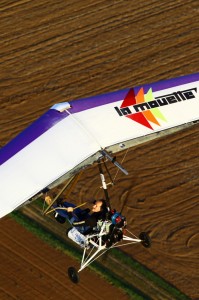