What if the weight of the batteries in an electric airplane could virtually disappear?  Researchers at Chalmers University of Technology in Gothenburg, Sweden have come up with an improved structural battery that exceeds the results of earlier research.  So-called “massless batteries,” although not as energy dense as cylindrical or pouch lithium-ion batteries, could be worthy substitutes.

The idea of making airplanes from materials that would provide energy from their inherent properties has been of interest for years.  Your editor wrote an article on “The Grand Unified Airplane” for Kitplanes magazine in 2013 based on the idea of combining solar power, piezoelectric flexing of wings, and structural batteries.  The ultimate goal was to create a machine that would move through the air on the energy of flight itself.  This might seem an unreachable fantasy, but material scientists are bringing us closer to the dream.

Chalmers University points out, “Structural battery composites cannot store as much energy as lithium-ion batteries, but have several characteristics that make them highly attractive for use in vehicles and other applications. When the battery becomes part of the load bearing structure, the mass of the battery essentially ‘disappears’”.  Illustration: Yen Strandqvist

Headlining their report with a rather non-academic boast, Chalmers University promotes its, “Big breakthrough for ’massless’ energy storage.  ”They follow with an intriguing first paragraph.  “Researchers from Chalmers University of Technology have produced a structural battery that performs ten times better than all previous versions. It contains carbon fiber that serves simultaneously as an electrode, conductor, and load-bearing material. Their latest research breakthrough paves the way for essentially ’massless’ energy storage in vehicles and other technology.”

Before getting too excited about that “10 times” claim, recognize that previous structural batteries did not display high energy densities, the property that keeps the Energizer Bunny hopping.  Chalmers notes the new battery has an energy density of 24 Watt-hours per kilogram, only about 20 percent that of comparable lithium-ion batteries.  It’s slightly less than one-tenth that of the best battery packs used in state-of-the-art aerial vehicle. 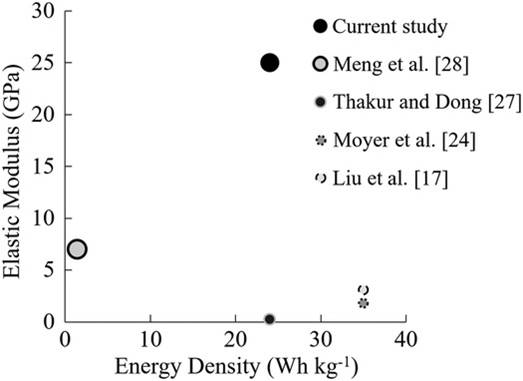 Chalmers explains why this is not a total loss.  “But since the weight of the vehicles can be greatly reduced, less energy will be required to drive an electric car, for example, and lower energy density also results in increased safety. And with a stiffness of 25 GPa (GigaPascals equaling 3,625,943 pounds per square inch), the structural battery can really compete with many other commonly used construction materials.”  Depending on the weight of composite materials used, the structure might be no weightier than a more conventional equivalent.

Consider, though, a possible application of such energy-storing materials.  Let’s use the 24 kW/hr materials applied to Calin Gologan’s Solar Elektra One, introduced in 2012.  The plane was a 3/3 machine, 1/3 structure, 1/3 batteries, and 1/3 payload including pilot.  Each third was 100 kilograms (220 pounds).  Imagine being able to replace half the structure with Chalmers’ structural battery material.  50 kilograms (110 pounds of the airframe would be capable of storing 1,200 Watt-hours per kilogram, shaving 4.6 kilograms (10.1 pounds) from the battery weight.  Not a big number, but still 1.5 percent of the total aircraft weight.  Chalmers researchers predict up to three times the energy density for future products, so that would equal a 4.5 percent reduction.  As on the Grand Unified Airplane concept, if those structural panels were also solar collectors, even more benefit could accrue in terms of extended range. 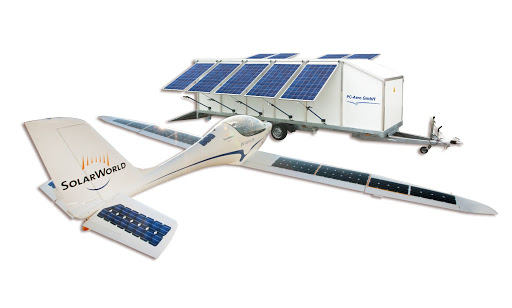 Calin Gologan’s PC Aero One, a 2012 design, light as it is, would benefit from structural batteries.  Greater strength and energy density are coming, according to researchers

Chalmers’ research is linked to earlier efforts by Emile Greenhalgh at Imperial College in London, who was affiliated with work at Volvo to develop structural body panels that would store energy.  Ongoing research was named by Physics World as one of 2018’s ten biggest scientific breakthroughs.

Leif Asp, Professor at Chalmers and leader of the project explains, “Previous attempts to make structural batteries have resulted in cells with either good mechanical properties, or good electrical properties. But here, using carbon fibre, we have succeeded in designing a structural battery with both competitive energy storage capacity and rigidity.” 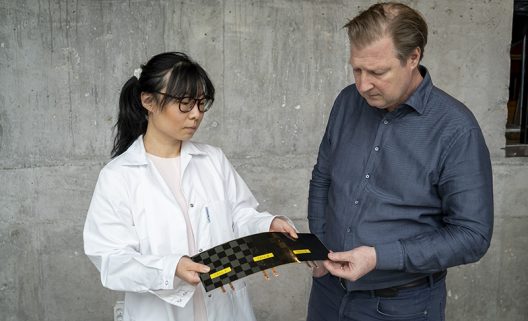 Doctor Johanna Xu with a newly manufactured structural battery cell in Chalmers’ composite lab, which she shows to Leif Asp. The cell consists of a carbon fiber electrode and a lithium iron phosphate electrode separated by a fiberglass fabric, all impregnated with a structural battery electrolyte for combined mechanical and electrical function. Image: Marcus Folino

The new battery has a negative electrode made of carbon fiber, a positive electrode made of a lithium iron phosphate-coated aluminum foil, separated by a fiberglass fabric, in an electrolyte matrix.  Researchers “did not choose the materials to try and break records – rather, they wanted to investigate and understand the effects of material architecture and separator thickness.” 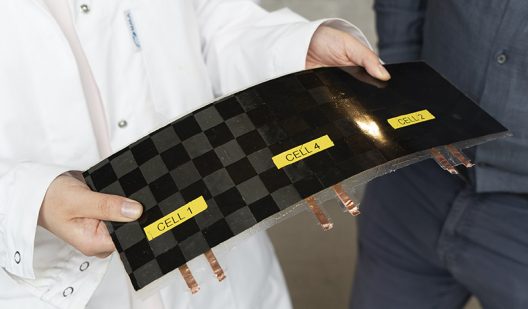 Further research financed by the Swedish National Space Agency will attempt to enhance the performance of the structural battery.  “The aluminum foil will be replaced with carbon fiber as a load-bearing material in the positive electrode, providing both increased stiffness and energy density. The fiberglass separator will be replaced with an ultra-thin variant, which will give a much greater effect – as well as faster charging cycles. The new project is expected to be completed within two years.”

Leif Asp, leading this project too, estimates that such a battery could reach an energy density of 75 Wh/kg and a stiffness of 75 GPa (10877830 psi) – about as strong as aluminum, but at a much lower weight.  He takes an optimistic view.  “The next generation structural battery has fantastic potential. If you look at consumer technology, it could be quite possible within a few years to manufacture smartphones, laptops or electric bicycles that weigh half as much as today and are much more compact.”

And in the longer term, it is absolutely conceivable that electric cars, electric planes and satellites will be designed with and powered by structural batteries.

Lief Asp concludes, “We are really only limited by our imaginations here. We have received a lot of attention from many different types of companies in connection with the publication of our scientific articles in the field. There is understandably a great amount of interest in these lightweight, multifunctional materials.” 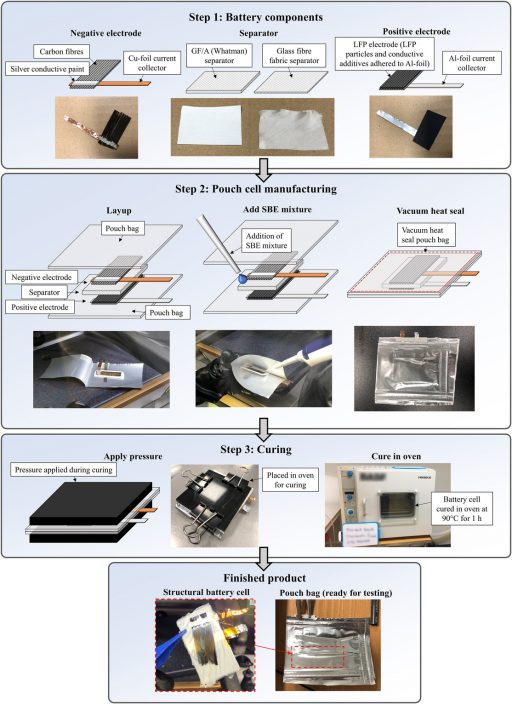 Making the Chalmers structural battery at the laboratory level. The processes should be able to be scaled to industrial levels

The structural battery uses carbon fiber as a negative electrode, and a lithium iron phosphate-coated aluminum foil as the positive electrode. The carbon fiber acts as a host for the lithium and thus stores the energy. Since the carbon fiber also conducts electrons, the need for copper and silver conductors is also avoided – reducing the weight even further. Both the carbon fiber and the aluminum foil contribute to the mechanical properties of the structural battery. The two electrode materials are kept separated by a fiberglass fabric in a structural electrolyte matrix. The task of the electrolyte is to transport the lithium ions between the two electrodes of the battery, but also to transfer mechanical loads between carbon fibers and other parts.

The project is run is a collaboration between Chalmers University of Technology and KTH Royal Institute of Technology, Sweden’s two largest technical universities. The battery electrolyte has been developed at KTH.  The project involves researchers from five different disciplines: material mechanics, materials engineering, lightweight structures, applied electrochemistry and fiber and polymer technology.

Funding has come from the European Commission’s research program Clean Sky II, and interestingly, from the U. S. Air Force.