ASTM International, formerly known as the American Society for Testing and Materials, develops “international consensus standards” for many industries, using input from its members in many fields and disciplines.  Their D-7566-11 “Standard Specification for Aviation Turbine Fuel Containing Synthesized Hydrocarbons” governs what can be put into jet and turbo-prop aircraft.  Updated in July 2011, it now allows the use of biologically-derived fuel “without the need for special permissions,” according to SAE International, itself a standards organization, and as reported by Patrick Ponticel. 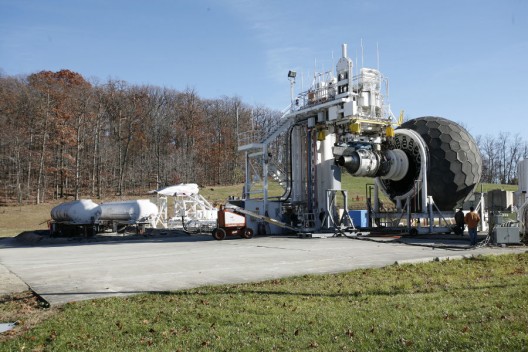 United Airlines was quick to take advantage of the revised standard, using “Solazyme-supplied algae oil that was refined into jet fuel by Honeywell’s UOP division near Houston. The blend used for the November 7, Boeing 737-800 flight was 40-percent Solazyme’s Solajet and 60-percent petroleum-derived commercial jet fuel (Jet-A).”

SAE explains that, “Under the ASTM standard, up to 50-percent bio-derived synthetic blending components can be added to conventional jet fuel. These renewable fuel components, called hydroprocessed esters and fatty acids (HEFA), are identical to hydrocarbons found in jet fuel, but come from vegetable oil-containing feedstocks such as algae, camelina, and jatropha, or from animal fats called tallow.”

Besides producing its algae-based product, Solazyme, a San Francisco-based company, has teamed with Dynamic Fuels to create plant- and animal-based fuel for the U. S. Navy, an early adapter of the technology.  With engine manufacturers such as General Electric and Rolls-Royce approving the use of such fuels after careful review and testing of their merit, the future would seem to be promising for these non-fossil alternatives.

Mike Epstein of GE Aviation notes that “’for some of those companies, it’s a challenge to make a thousand gallons, which is just a beginning point.’  To put things into perspective, he said, the amount of jet fuel consumed annually around the world is about 65 billion gallons.” (And that would only be about 2 percent of the world’s total fuel demand! Editor)

The allure of domestically-produced fuel and its performance are not lost on engine manufacturers.  Following tests on two Embraer engines, Epstein said, “The fuel performed as expected and is consistent with Jet-A.”  A Boeing spokesperson adds that “biofuels have proven to perform even better than conventional jet fuel.”

“Today’s historic flight with United marked a significant milestone in the history of aviation, and demonstrated the commercial applicability of our drop-in fuel,” said Jonathan Wolfson, CEO, Solazyme.  “The U.S. Navy has demonstrated the effectiveness of our fuel in multiple vessels over the past year, and we are honored to be working with industry pioneers such as United and Honeywell’s UOP to see this important next step in the commercialization of our renewable fuels.”

Following closely on the United first flight, a December 5 press release cited Dynamic Fuels, LLC, a joint venture between Tyson Foods, Inc. and Syntroleum Corporation, as having been awarded a contract to supply 450,000 gallons of renewable fuels to the Navy.  Solazyme will assist Dynamic Fuels in fulfilling the contract.

Dynamic Fuels will produce the naval fuel at its Geismar, Louisiana plant using “U.S.-sourced yellow grease (used cooking oil) as well as Solazyme’s tailored algal oil as feedstocks.”  Several plusses ensue.  What would be disposable waste becomes a less-polluting energy source, frees the U. S. from part of its billion-dollar-a-day foreign oil obligation, and becomes part of Secretary of the Navy Ray Mabus’s commitment to run the Navy on at least 50-percent bio-fuel by 2020.

The video provides a look at how Dynamic Fuels refines tallow and other animal fats and wastes into a fuel good enough to run in your Rolls-Royce or GE turbofan engine.  As we develop more such alternatives, Secretary Mabus’ vision of freeing the United States from foreign wars in the service of protecting oil supplies may be closer to reality, and our energy independence may be more secure.