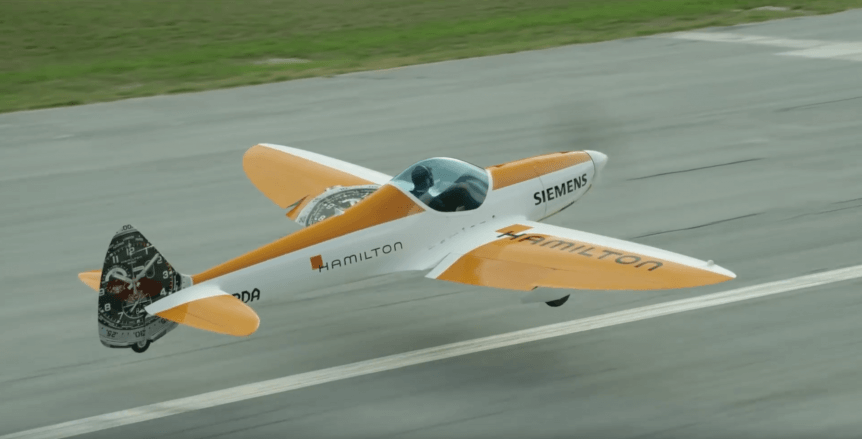 Electric airplanes currently can give 15 or 20 minutes of intense aerobatics, or about an hour of more sedate cruising.  What if you had a lovely little airplane that invited flinging it about the sky, but you still wanted to visit distant places?  In 2005, Mike Friend owned a Silence Twister, a Spitfire-like single-seater registered as N787M, a nod to Mike’s employer, Boeing.  He thought about making it a hybrid craft.

An early effort around 2010 by a German company to electrify the Twister did not produce a surge of orders, and Mike presented a 2011 symposium feature on making a hybrid out of the Twister to reduce its fuel burn while retaining its frisky character.  That approach would have used a pod under the belly of the Twister, making it look like a fighter with an auxiliary fuel tank.  Aerobatics combined with long-range seemed like a potential winner.

Cute as it was, the concept was still a single-seat aircraft – and many of us enjoy taking our friends and family for flights.  The major barrier to making a pure electric craft is still, after a decade of breathless announcements of great progress, the battery.  Mike Friend explains,” I have been involved in the design of electric airplanes since 2001, when I first proposed that Boeing build a fuel cell demonstrator aircraft powered by a hybrid electric power plant. 15 years ago, I was assured that within ten years the power density of batteries (and the cost of fuel cells, but that is another story…) would improve to the point where electric flight could become practical. Here we are 15 years later, and the energy density of batteries that you and I can go out and purchase is only slightly better than it was at the turn of the century. So what do we do about this?”

Recent announcements and video of the Hamilton aEro Electric Twister flying in Switzerland show the sleek cowling made possible by the compact Siemens motor.  A three-blade scimitar propeller graces the airplane’s nose.  But the one hour endurance at cruise and roughly fifteen minutes battery availability for full-out aerobatics demonstrates Mike Friend’s premise that we really haven’t progressed very far with real-world battery performance.

Mike sees a workaround that employs current technology.  “Range-extender hybrids having a relatively small battery pack used for takeoff and climb, with a gasoline powered range extender putting out enough power for cruise flight.”  This is similar to the solution Stuttgart University came up with for the e-Genius – with a power pod on the right wing.  It also follows the power system used on the Equator P2.  With available batteries able to produce half of the 350 Watt-hours per kilogram needed for practical power for a light aircraft, Mike turns to a hybrid solution.

Mike spoke at the Powering Imagination Symposium at Seattle’s Museum of Flight – an event organized by Erik Lindbergh and Eric Bartsch.  He reflects on the consensus among speakers there regarding the energy storage capacity needed to enable practical pure electric aircraft. “The number we agreed on was 350 watt-hours per kilogram. This is a number that is not only for the battery cells, but also for the Battery Management System, and for the battery housing.  Upon hearing my story on battery performance, I often hear the words “but Mike, that is so depressing! I thought we were just months away from being able to buy an electric airplane.” I, on the other hand, don’t find it depressing at all, but rather a grand engineering challenge! As my first boss at Boeing told me many years ago, ‘Physics is a harsh mistress.’”

Mike notes that electric aircraft, to win converts, must perform at least equally to available fossil-fuel driven aircraft.  He explains that Teslas are popular because their performance exceeds that of many conventional cars.  He points to his 70-year-old Aeronca L-16A (a military version of the Champion), which carries two people, can take off in 200 meters (650 feet), climb at three meters per second (590 feet per minute), and cruise 140 kilometers per hour (87 mph) for two hours (with a 30-minute fuel reserve). 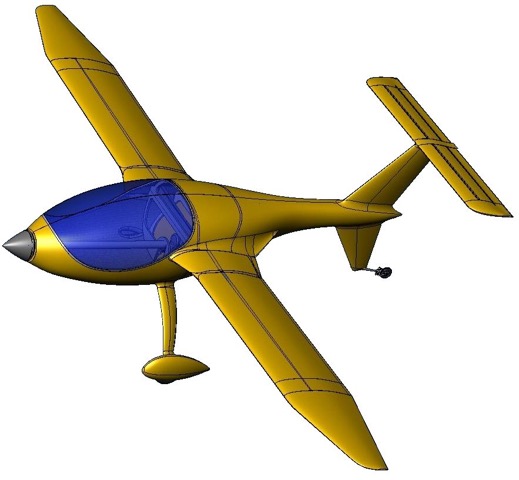 He posits that a modern electric example would need at least 75 horsepower, but with a sleeker design, could cruise at 140 kph on only 15 kilowatts (20 hp).  It would use “a relatively small lithium-ion battery pack, combined with a gasoline motor capable of providing the 15 kW needed for cruising flight.”  Since Mike and his wife cruise around Puget Sound on a MotoGuzzi cycle, he suggests the 850 cc MotoGuzzi V9 as a drive unit for both the propeller and range extender.  It weighs a mere 43 kilograms (94.6 pounds) and can put out “slightly more than 15 kW of power at the low 2500 RPM that a quiet propeller should turn. Why turn the engine so slowly? Because a direct drive is much lighter and simpler than a gear reduction drive, and turning the engine slowly should keep it quiet and reliable. 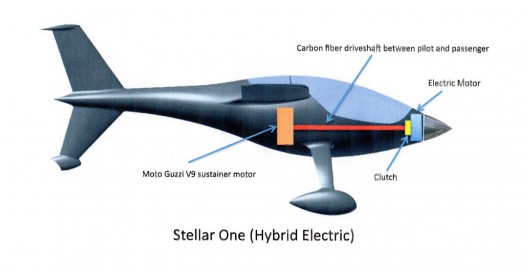 Mike’s layout for power components in Stellar One

Mike’s hypothetical example airplane is based on a Swiss design by Bernard Clausen and Cristophe Bourban called the Stellar One.  In their concept, a BMW motorcycle engine sat behind the pilot and passenger, with power transmitted to the propeller by a shaft passing between the two.  Mike’s alternative approach puts the electric motor at the propeller end and the sustainer engine in place of the original BMW.

Mike concludes, “Why, you might ask, go to all of this trouble just to match the performance of a 70 year old antique? For starters, I believe that electric power is the future, and we need to start finding a way to that future with the technology at hand today. Until the long-anticipated improvement in batteries to the 350 watt-hr per kilogram level becomes a reality, I think a hybrid is the best way forward.”

Mike is president of Experimental Aircraft Association 406, serving the Bremerton/Puget Sound area near Seattle, Washington.  He retired from his position as Technology Director for Boeing last year and is obviously still pursuing the hope of improving light aircraft economy and making such craft good environmental citizens.