This week, a kerfuffle tsunami has swept through the aeronautical press, with the announcement by Steven Barret of the Massachusetts Institute of Technology (MIT) that he has flown an ion-powered airplane that “doesn’t depend on fossil fuels or batteries.”*  (A minor point – the airplane does have a battery that gets its output voltage ramped up by a custom power supply.)

Five years ago, your editor reported on ionic thrusters, several of which were being tested by Barrett, associate professor of aeronautics and astronautics. These little devices have great promise for moving vehicles in space, where the vacuum presents no aerodynamic drag to overcome. Even a small nudge from a thruster in space will cause a vehicle to accelerate. They work fine for low-speed propulsion of small balloons here on earth, or for lightweight lifters as part of science demonstrations, but have been neglected for heavier-than-air craft until now.

Comparing the development level of his ionic airplane to that of the Wright Brothers’ Flyer 115 years ago, Barret says, “This is the first-ever sustained flight of a plane with no moving parts in the propulsion system. This has potentially opened new and unexplored possibilities for aircraft which are quieter, mechanically simpler, and do not emit combustion emissions.”

Unlike the Wrights’ aircraft, and every other one since, Barret’s plane does not rely on propellers or turbines to move it through the air. Instead, it is powered by a flow of ions produced aboard the airplane, which generate enough thrust to propel the plane over a sustained, steady flight.

The craft’s 40,000 Volts supplied across the leading edge wires gives one pause, though. In a 2015 Cycle World Interview, Zero Motorcycle Chief Technical Officer Abe Askenazi said his company limited voltage on its battery packs to 102 Volts for operator safety. Perhaps, for the same safety concerns, many manufacturers are developing 48-Volt mild hybrid drive trains. The battery “stack” in Barret’s ion plane has its voltage electronically transformed to the 40,000 Volts necessary for forward motion. 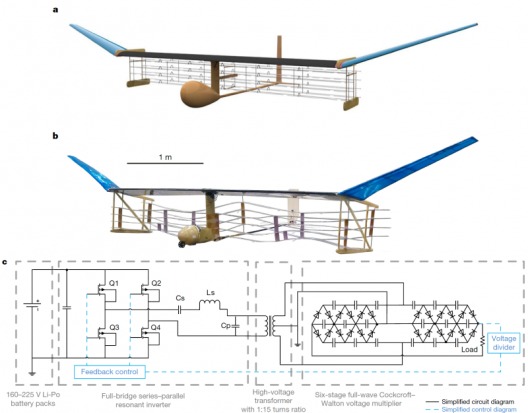 EAD airplane design. a, Computer-generated rendering of the EAD airplane. b, Photograph of actual EAD airplane after multiple flight trials. c, Architecture of the high-voltage power converter (HVPC). The HVPC consists of three stages: a series–parallel resonant inverter that converts 160–225 V direct current to a high-frequency alternating current; a high-voltage transformer that steps up the alternating-current voltage; and a full-wave Cockcroft–Walton multiplier that rectifies the high-frequency alternating current back to direct current. The three stages contribute a voltage gain of about 2.5×, 15× and 5.6×. Xu et al.

The five-pound airplane has a five-meter (16.4-feet) wingspan with an array of thin wires under each wing panel. According to MIT, “The wires act as positively charged electrodes, while similarly arranged thicker wires, running along the back end of the plane’s wing, serve as negative electrodes.”

The team, which included Barret and Lincoln Laboratory staff members Thomas Sebastian and Mark Woolston, made ten flights of 60 meters, limited by the size of MIT’s duPont Athletic Center gymnasium – which accounts for the basketball games in the background of some scenes in the video.

The MIT announcement gives a description of the action that propels Barret’s plane. “Once the wires are energized, they act to attract and strip away negatively charged electrons from the surrounding air molecules, like a giant magnet attracting iron filings. The air molecules that are left behind are newly ionized, and are in turn attracted to the negatively charged electrodes at the back of the plane.

“As the newly formed cloud of ions flows toward the negatively charged wires, each ion collides millions of times with other air molecules, creating a thrust that propels the aircraft forward.”

Barret, inspired by the noiseless shuttlecraft in the background of Star Trek TV episodes and films, found answers finally after “a sleepless night in a hotel when I was jet-lagged… and I was thinking about this and started searching for ways it could be done. I did some back-of-the-envelope calculations and found that, yes, it might become a viable propulsion system. And it turned out it needed many years of work to get from that to a first test flight.”

In the near future, he sees such propulsion systems powering small drones, certainly less buzzy than even the electric ones. Farther out, “he envisions ion propulsion paired with more conventional combustion systems to create more fuel-efficient, hybrid passenger planes and other large aircraft.” Certainly, the idea of a delivery drone silently dropping off The Times or a pint of yogurt would save many sleepless mornings for many of us.

The team’s paper on their exploits can be found in the journal Nature under the title “Flight of an aeroplane with solid-state propulsion.”

*This was reported so widely and effectively that no fewer than four readers sent links.  Thank you, all.