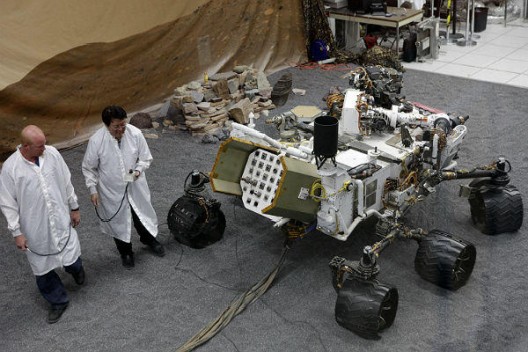 Mars Curiosity Rover is bigger than one would expect, over six feet tall and weighing 1,982 pounds. It travels up to 660 feet per day on its multiple wheels, looking for rocks to analyze with its ChemCam.

Powered by the heat from its plutonium reactor, Curiosity will rove Mars for two years if all goes well. The heat is converted to electricity (which then drives the wheel motors on the rover) by a lead telluride thermoelectric material, a semiconductor which, capable as it is, has been eclipsed in efficiency by a new form of the material developed by Northwestern University researchers. Mercouri G. Kanatzidis, the Charles E. and Emma H. Morrison Professor of Chemistry in Northwestern’s Weinberg College of Arts and Sciences, explains that his heat exchange material is twice as efficient as that used on Curiosity, a breakthrough with potential uses to boost car mileage, improve industrial processes, and maybe even make hybrid aircraft more efficient.

Currently used materials have limited thermal conversion abilities – turning five to seven percent of heat into electricity. Kanatzidis claims his improved material, still based on lead telluride, can convert 15 to 20 percent of that heat to electricity. Since car exhaust pipes and industrial smokestacks can range, “From 400 to 600 degrees Celsius (750 to 1,100 degrees Fahrenheit), the sweet spot for thermoelectrics use,” according to Science Daily, the potential for this new material becomes apparent. BMW, for instance, is investigating its use on exhaust systems.

The most efficient thermoelectric material known, Kanatzidis’ find has a thermoelectric figure of merit (ZT) of 2.2. Curiosity’s older material has a ZT of about 1, partially explaining why the rover is limited to 0.5 mph. 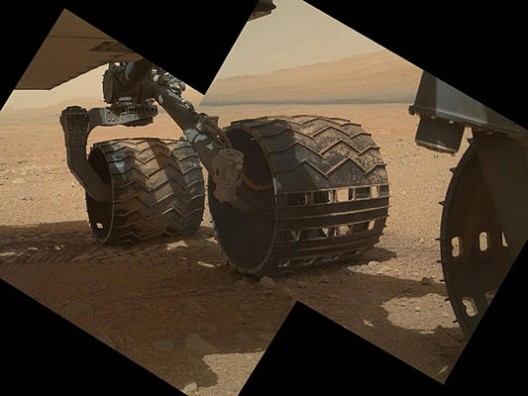 Three left wheels of NASA's Mars rover Curiosity combined in two images that were taken by the rover's Mars Hand Lens Imager (MAHLI) on September 9, 2012. In the distance is the lower slope of Mount Sharp. JPL-Caltech/NASA

“People often ask, what is the energy solution?” said Vinayak P. Dravid, one of Kanatzidis’ close collaborators. “But there is no unique solution – it’s going to be a distributed solution. Thermoelectrics is not the answer to all our energy problems, but it is an important part of the equation.

“Now, having a material with a ZT greater than two, we are allowed to really think big, to think outside the box. This is an intellectual breakthrough.”

“Other members of the team and authors of the Nature paper include Kanishka Biswas, a postdoctoral fellow in Kanatzidis’ group; Jiaqing He, a postdoctoral member in Dravid’s group; David N. Seidman, Walter P. Murphy Professor of Materials Science and Engineering at Northwestern; and Timothy P. Hogan, professor of electrical and computer engineering, at Michigan State University,” according to Science Daily.

Nature.com explains some of the intricacies of the team’s September 20 paper in the journal Nature.

”Kanatzidis and his team began with one of the most well-known thermoelectrics: lead telluride (PbTe), which usually has an ordered lattice structure. The researchers scattered in a few sodium atoms to boost the material’s electrical conductivity, then shoved in some nanocrystals of strontium telluride (SrTe), another thermoelectric material. The crystals allowed electrons to pass, but disrupted the flow of heat at short scales, preserving the temperature gradient.

“The final step was to stop heat flow over longer scales. To do this, the team created a fractured version of their pretty thermoelectric crystal. The fracturing did the trick: the cracks allowed electrons to move but reflected heat vibrations in the crystal. The material had a conversion efficiency of about 15% – double that of normal PbTe thermoelectrics.”

“’Every time a phonon is scattered the thermal conductivity gets lower, which is what we want for increased efficiency,’” Nature.com quotes Kanatzidis.

“In this work, the researchers show that all length scales can be optimized for maximum phonon scattering with minor change in electrical conductivity. ‘We combined three techniques to scatter short, medium and long wavelengths all together in one material, and they all work simultaneously,’ Kanatzidis said. ‘We are the first to scatter all three at once and at the widest spectrum known. We call this a panoscopic approach that goes beyond nanostructuring.’”