Perovskites, calcium titanium oxide minerals composed of calcium titanate, with the chemical formula CaTiO, are found in relative abundance throughout the world and have  characteristics that make them a plausible candidate for use in solar cells.

Initially showing good efficiency at small scales, perovskite solar cells were potentially less expensive to produce than conventional silicon-based units, and could be more efficient, especially as single-layer silicon cells reach their theoretical limit of 30-percent efficiency.  Perovskite cells could be configured to respond to different wavelengths of light, stacked on one another, and still be thinner than conventional solar cells. 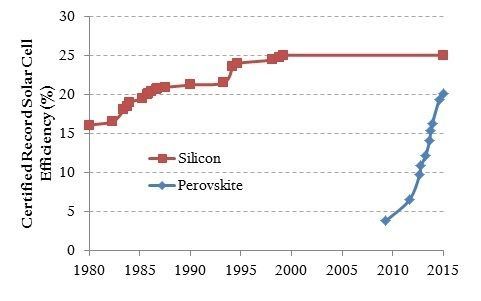 Part of the attraction of perovskites cells has been their rapid increase in efficiency, nearly equaling the best silicon cells in about six years, as opposed to the 35 years needed for silicon cells to increase from 16 percent efficiency to a little over 25.

Some factors get in the way, one being that perovskites react badly with moisture.  Thus, their life spans are much shorter than the more expensive silicon alternatives.  This raises the question of life cycle versus price – will the need to replace the low-cost solar panels that fade away in a few years be more expensive over time than another installation that lasts ten to 30 years?

Another issue – that of viable cell size, has been an impediment to commercial adoption.  In the laboratory, increasing output from solar cells is done regardless of aperture size, but if that aperture size is limited to bite-size chunks around 0.1 square centimeters (0.10155 square inches), production costs would overwhelm their commercial feasibility.   Apparently, scaling these cells to larger platforms causes them to lose stability and therefore reduces their lifespans.

The National Renewable Energy Laboratory (NREL) performs certification and characterization testing for all solar cells in this country, and is “one of only two laboratories in the world to hold an International Organization for Standardization (ISO) 17025 accreditation for primary reference cell and secondary module calibration, in addition to accreditation for secondary reference cell calibration under American Society for Testing Materials (ASTM), and International Electrotechnical Commission (IEC) standards.”  Using standard size test cells would help enable a “level playing field” for all testing.

Other standardized elements come into play.  Matthew Gunther, writing in the Royal Chemistry Society’s Chemistry World, explains,”It is standard practice to test a cell by performing a current–voltage measurement on it. The cell is irradiated with 1000 [Watts per square meter] of light at a temperature of 25°C, mimicking the conditions of the midday sun, and its power output is measured.”

But, in the March 2, 2015 article, Gunther quotes Keith Emery, the manager of the NREL’s photovoltaic cell and module performance characterization group taking a skeptical view.  “All the exciting efficiencies and any energy claims that are associated with [perovskite solar cells] should be taken with a grain of salt,”  He felt the claims should be independently verified and held to a robust standard.”  At least two teams of researchers have stepped forward with proof of their own. 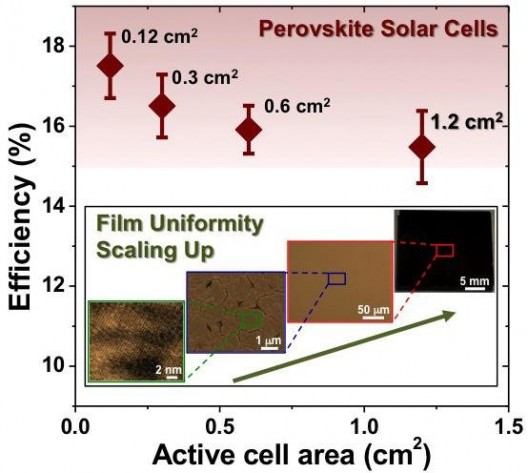 Two groups of researchers have been enlarging the size of perovskite cells and increasing efficiency.  Image: Brown University

One, a team of Swiss, Chinese and Japanese researchers has found a way to scale up perovskite solar cells without a loss of stability, according to their paper in the journal Science.  Their results were verified by representatives from the National Institute of Advanced Industrial Science and Technology.

Their paper in the journal Science, describes their approach.  “Instead of changing the perovskite, the researchers added a new element to a device that uses it, a thin film light collector that is placed over the cells. The film was constructed in two layers, one a positively charged cubic rocksalt semiconductor, the other a sheet of negatively charged titanium oxide. Arriving light causes the perovskite layer to be excited which results in liberated electrons moving through the titanium oxide layer on one side of the film while holes are transported through the other. The result is a protective film covering that actually increases conductivity of the device.”

The film allowed scaling cells to sizes allowing accreditation, boosted efficiency to over 15 percent, and protects the cells from humidity, a solar-powered hat trick.

Another team from Brown University, working with researchers at NREL, increased cell sizes to larger than one square centimeter.  Their findings were similar to those of the tri-national group’s.

“The use of tiny cells for efficiency testing has prompted some to question comparison of perovskite solar cells with other established photovoltaic technologies,” said Nitin Padture, professor of engineering at Brown, director of Brown’s Institute for Molecular and Nanoscale Innovation, and one of the senior authors of the new research. “But here we have shown that it is feasible to obtain 15-percent efficiency on cells larger than a square centimeter through improved processing. This is real progress.”

Their process, though different, yielded similar outcomes.  “Perovskite precursors are dissolved in a solvent and coated onto a substrate. Then the substrate is bathed in a second solvent (called anti-solvent) that selectively grabs the precursor-solvent and whisks it away. What’s left is an ultra-smooth film of perovskite crystals.”

The team developed a “trick” to grow the perovskite crystals to a larger size. “The trick is to add excess organic precursor that initially “glues” the small perovskite crystals and helps them merge into larger ones during a heat-treatment, which then bakes away the excess precursor.”  This led to higher efficiency and fewer defects.  Padture thinks he can make even larger cells with efficiencies of 20 to 25 percent.

Padture and colleagues at the University of Nebraska-Lincoln were recently awarded a $4-million grant by the National Science Foundation to expand their perovskite research.