MIT and NASA have constructed several aircraft wings using tiny, identical pieces bolted together in a highly flexible, deform-able structure.  At that, the wing is light, strong, and capable of “morphing” in ways that enable slower landing speeds, faster rates of climb, and high maneuverability.

Sierpinski fractal. As we zoom in, we see the repetition of ever smaller, identical images, much like repeated patterns in NASA/MIT’s structural design

This type of assembly is much like fractals, repeated forms that assemble into larger forms that become enlarged examples of the smaller ones.  These forms are part of the natural world, so the mimicry in the morphing wing can very mach be said to be an organic design. 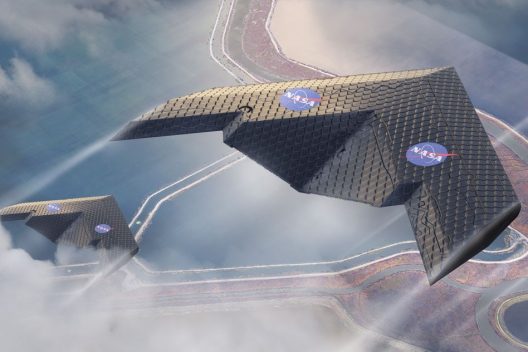 New way of fabricating aircraft wings could enable radical new designs, such as this concept, which could be more efficient for some applications. Credit: Eli Gershenfeld, NASA Ames Research Center

The tiny pieces comprise thousands of miniature triangles “matchstick-like struts,” according to David L. Chandler at the MIT News Office.  The tiny subassemblies were bolted together by hand  to form a lattice-like framework, and are then covered with a thin polymer film of the same material as the framework.  Future plans call for robot assembly to speed up construction. 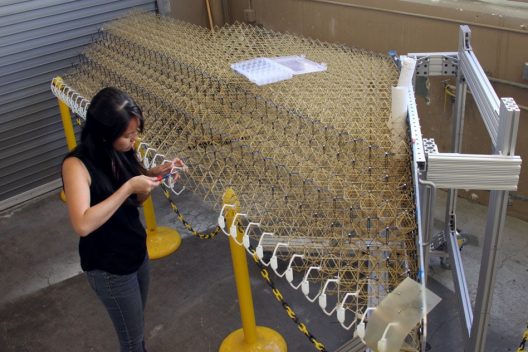 Small elements are bolted together. Identical nature of components should make manufacture and assembly easy for robots

As Chandler writes, “The result is a wing that is much lighter, and thus much more energy efficient, than those with conventional designs, whether made from metal or composites, the researchers say. Because the structure, comprising thousands of tiny triangles of matchstick-like struts, is composed mostly of empty space, it forms a mechanical ‘metamaterial’ that combines the structural stiffness of a rubber-like polymer and the extreme lightness and low density of an aerogel.”

The new wing was tested in a NASA Langley wind tunnel and described in the journal Smart Materials and Structures, co-authored by research engineer Nicholas Cramer at NASA Ames in California, MIT alumnus Kenneth Cheung (now also at NASA Ames) and Benjamin Jenett, a graduate student at MIT’s Center for Bits and Atoms, as well as eight others.  The abstract contains this intriguing concept: “We demonstrate an example application experiment using two building block types for the primary structure of a 4.27 m wingspan aircraft, where we spatially program elastic shape morphing to increase aerodynamic efficiency and improve roll control authority, demonstrated with full-scale wind tunnel testing.” 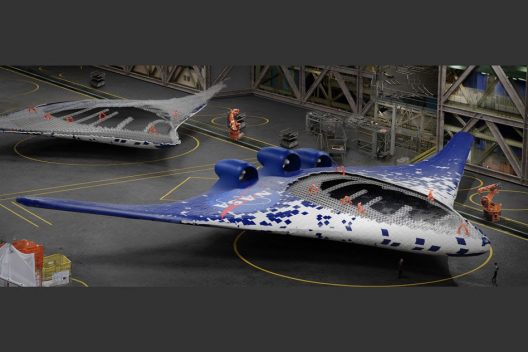 MIT adds, “Jenett explains that for each of the phases of a flight—takeoff and landing, cruising, maneuvering and so on—each has its own, different set of optimal wing parameters, so a conventional wing is necessarily a compromise that is not optimized for any of these, and therefore sacrifices efficiency. A wing that is constantly deformable could provide a much better approximation of the best configuration for each stage.”

Besides offering greater flexibility in the manufacturing of future aircraft, this construction technique could find favor with architects and others needing lightweight, strong buildings.