Wind surfing across southern Australia, a German team showed ingenuity and skill in a 3,000 mile journey that, as their web site boasts, used “no electricity mains, no gasoline,” and produced “zero CO2.” 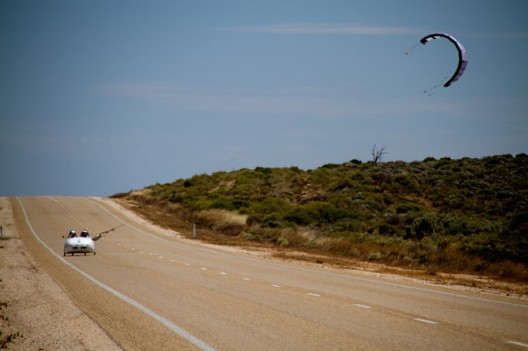 Probably not a viable option for urban driving

TG Daily and Gizmag announced the successful crossing of Australia (Albany to Sydney) by a wind-powered car.  Although the car carried a telescoping mast and small wind turbine to recharge its 8 killowatt hour lithium battery pack, the two designer/drivers were forced to plug in to available sources from time to time, accounting for the $15 cost of the powering the expedition.  When possible, they towed the 200 kilogram (440 pound) car with a kite.

The Wind Explorer web site proclaims that “Plan[ning] your route with the Wind Explorer is… unique pioneering.  But behind it, how efficient, autonomous and environmentally friendly mobility today can be!” 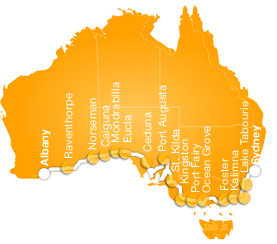 Especially if you are an accomplished kite flyer.  Even more outré than their portable wind turbine, the team used a large kite to pull them along the open stretches of beaches and highways that abound in the Land Down Under, although that free ride was not without danger.

Dirk explains, “We had many difficult situations during the kiting on the road.  About 30 meters (96 feet) long truck races… in at 120 km/h (75 mph) while trees grew beside the road.  I had to fly the kite extremely precise[ly] (even under power lines through it), while Stefan has kept the car on the road.”

The fact that Dirk Gion is a TV host and his partner, Stefan Simmerer is an extreme athlete and climber might hint at a significant backup crew going along with them (where did the kite and wind turbine go when not in use?) and a special in the works.

The 4,800 kilometer journey uses technology and techniques not available to the average urban driver, but the portable wind turbine may someday be downsized to fit in an aircraft’s luggage compartment, making overnight recharging available – just as it was for the trans-Australia drivers.  Considering they made up to 493 kilometers (305 miles) in one day on a combination of battery and kite power, one can only wonder how these technologies might be applied to future aircraft.